This is a frequent question of many car service customers, including ours. Sometimes even an experienced specialist cannot clearly answer this question about fuel economy. Here, using our knowledge and experience, we will try to talk about the reasons for this important problem for all of us.

Attention! To help the diagnostician.

Reference books and other technical literature are offered to your attention.
You will have useful information with which you can determine the causes of malfunctions and errors in the operation of components and assemblies of your car.
Content in Russian.
Format. e-books.

The main sensors required by the computer for the optimal calculation of the air-fuel mixture are:

The cause of increased fuel consumption is also affected by malfunctions of components that are not basic and necessary for engine operation.
For example, the system EGR (Exhaust Gas Recirculation), which serves to reduce the emission of harmful components of fuel combustion. In case of malfunction EGR valve(stuck in the open state) in idle mode, exhaust gases burst into the intake manifold and sharply upset the balance of the air-fuel mixture. The ECU in such cases is not able to control the operation of the engine. With this malfunction, fuel consumption can increase markedly, especially in a city where the proportion of engine operation in idle and frequent rebooting is high.
Faults associated with the engine management system, without electronic diagnostics, without scanning sensors and actuators are difficult to resolve. Finding an engine malfunction by replacing all of its sensors and accessories is a waste of time and money.

2. Abnormal pressure in the fuel system of the engine.
The engine ECU calculates the fuel injection based on the constancy of the given fuel pressure. With increased fuel pressure, the balance of the air-fuel mixture is upset. A situation in which the fuel pressure can be too high is quite rare, because the set fuel pressure is supported by simple and reliable pressure regulators. But even in this case, the ECU, according to the readings of the oxygen sensor about re-enrichment of the fuel, compensates for the excessive fuel injection, reducing the pulse time at the injectors.
A more serious effect on fuel consumption has a reduced pressure in the fuel system. In this case, the engine power is underestimated, pressing the gas pedal only worsens the situation, the acceleration dynamics deteriorates, the ECU is not able to compensate for the lack of fuel due to even the maximum fuel injection pulse time. In addition, when the throttle is wide open, the vacuum in the intake manifold drops. which means that the air flow sensors give an oversized engine load signal that does not correspond to reality. This leads to a final drop in engine power.
If the car is equipped with an automatic transmission, then the operating time in lower gears increases, the engine runs for longer at higher speeds (KPD decreases), hence the high fuel consumption.

3. Faulty engine injectors.
Operating without preventative maintenance, dirty engine injectors are one of the most common causes of increased fuel consumption.
Due to the violation of the shape of the spray pattern and the quality of fuel atomization, normal mixture formation is disturbed, resulting in a decrease in efficiency: engine "troit"a significant portion of the fuel is useless "burns down" in the exhaust manifold and catalyst of the car, reducing its service life.
With contaminated injectors, the dynamics of acceleration of the car deteriorate sharply, shift modes are delayed, the engine runs at high revs for a long time, and fuel consumption increases.
Conditions are created under which the load on the high-voltage parts of engine ignition systems is increased: candles, high-voltage wires, ignition coils, electronic distributors, which leads to their damage or a sharp decrease in useful life.
Our recommendations. periodically do preventive cleaning of injectors, this is one of the important ways to save fuel.

Read about the methods of cleaning injectors on the website www.rat-auto.ru.
Read more about the consequences of running an engine with dirty injectors here.

4. Failure of the catalytic reactor (catalyst).
A burnt and destroyed catalyst is the reason for a sharp decrease in engine power and very high fuel consumption.
With high resistance to exhaust gases, the balance of the air-fuel mixture is abruptly shifted towards re-enrichment, because at low discharge in the intake manifold, the engine control unit analyzes a large load and increases the open time of the injectors.
There is an avalanche process. the more "clogged" catalyst, the richer the mixture, the more the catalyst overheats and collapses.

Read more:  Which Chain Oil Is Suitable For Chainsaw

The reasons for the destruction of the catalyst:

5. Clogged air filter.
Everyone knows this reason, but for some reason many people forget to replace the air filter in time. With a clogged air filter not only get the effect "air starvation", but, more importantly, the correct operation of the sensors-flowmeters of the incoming air (MAP, MAF, etc.) is disrupted.
The ECU erroneously calculates the engine load; accordingly, mixture formation is incorrect. Increased fuel consumption is inevitable.

7. Car driving style and fuel economy.
The basic principle of economical driving is a quick shift to a higher gear and the use of coasting (inertia).
If your car is equipped with a speed control system ("Speed ​​control" or "Cruise control"), look at the algorithm of operation of such systems. This is a quick acceleration to the highest gear, acceleration reset and coasting. If you compare fuel consumption in "Speed ​​control" and in their own manner of driving, some motorists will be the losers.
Some drivers who changed their car from manual transmission to automatic did not change their driving style, that is, they continue "work" with two legs, but under the left foot is not the clutch pedal, but the brake!
Such drivers probably complain about increased fuel consumption.

10. Effect on fuel consumption of engine operating temperature.
Optimum engine operating temperature. 97-104°FROM.
When the engine overheats, the balance of the air-fuel mixture is disturbed, the mixture becomes discharged due to overheated intake air and rapidly evaporating fuel. The filling of the engine cylinders under these conditions is bad: the engine runs on a lean mixture, detonation ignition and a sharp loss of power appear. These conditions lead to further engine overheating and increased fuel consumption.

The main causes of engine overheating:

Read more:  How to Remove a Partner Chainsaw Oil Pump

In a cold engine, the computer program calculates the enriched fuel injection, this is necessary for stable operation in warm-up mode. If the engine temperature is lower than the operating one, the ECU continues to control the quality of the air-fuel mixture according to the engine warm-up algorithm. For example, at temperatures below 80°With fuel consumption may increase by 15-20% more than the nominal. The reason for the low temperature of the engine is usually the lack of a thermostat or a faulty (loosely closed) thermostat.
There is another reason for increased fuel consumption due to low engine temperature. this is the constant operation of the car for short distances. If the driver uses the car to get to the place of work in 3 km. from home and back, the engine will never heat up to operating temperature.

11. Wrong choice of wheel size.
Any design of automatic transmission is designed taking into account the operation of a car with a certain type and size of wheels. Hydraulics, kinematics and an electronic automatic transmission control system will optimally work only with the recommended type and size of wheels. Violation of this requirement leads to a natural result. increased fuel consumption.
Some modern electronic transmissions (for example, Chrysler 41TE, 42LE, 45RFE) have a quick learn mode that allows optimizing automatic transmission control depending on its hydromechanical characteristics and adapting to a given wheel size (pinion factor). But, if wheels from an SUV are installed on an ordinary passenger car, then no miracles of modern electronics will save you from excessive fuel consumption.

The reason for the high fuel consumption often lies on the surface. it is enough to make a competent diagnosis of the engine, but sometimes there are a number of malfunctions associated with various components and assemblies of the car, each of which contributes its share of errors to the overall foggy picture of unreasonably high fuel consumption.
If in such a situation you have to turn to a car service with a problem of excessive fuel consumption, do not immediately blame specialists for incompetence, they will not be able to determine its cause precisely in one electronic diagnostics session.
Sometimes the problem of increased fuel consumption can be solved only in stages, removing errors in each faulty node of the car, be patient.

P.S. This article is not written for those who follow the motto: "Fuck Fuel Economy!" 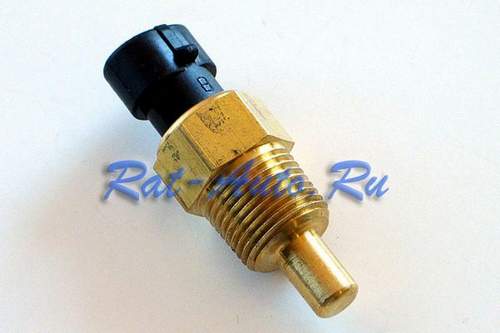 The operation of the temperature sensor is based on the property of a thermistor.

The rheostat voltage inside the TPS is proportional to the angle of rotation of the throttle.

The intake manifold vacuum sensor converts the vacuum discharge into an electrical signal.

The fuel pressure varies within 10%, depending on the magnitude of the vacuum in the intake manifold.

Abrasive particles in gasoline damage the gear pump inside the pump.

On the injector, tarry and carbonaceous deposits build up, violating the shape of the torch.

A dirty air filter is very resistant to incoming air.

The lack of a torque converter lock-up mode leads to increased fuel consumption.

The reason for the destruction of the catalyst. additives in gasoline

All the channels of this piece of catalyst, which was parked on a car with low mileage, are clogged with additives that artificially increase the octane number of low-quality gasoline.
The deposits have a characteristic reddish color.

Through the thermostat’s tightly closed valve, a constant flow of cold antifreeze prevents the engine from operating at normal temperatures.