A practical owner, like no one else, understands how convenient and efficient a stand-alone manual power tool is. A professional builder, who is mainly engaged in finishing work, can’t do without a screwdriver at all. Nevertheless, a battery, of any type, after a certain time begins to lose its energy potential. Purchasing a new battery is not cheap. But who said that screwdriver battery recovery is not possible in principle? What prevents the owner of the brand modification to save on expensive batteries? You probably will not be surprised at the universality of the answer. Ignorance. Developing the topic, we note: it is possible! The material in this article will help you solve the problem of “global aging” of the battery. One has only to read about how and what needs to be done. 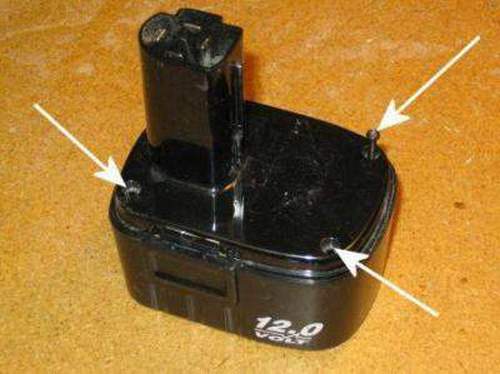 "Banks" in which money is not stored

Speaking about the restoration of the screwdriver’s battery, one cannot fail to mention that the batteries with which the specified construction tool is equipped can have different technical characteristics. Often this kind of "energy personality" of the power source plays an important role at the time of operation. For example, under low-temperature operating conditions, preference should be given to nickel-cadmium batteries. While the nickel-metal hydride type batteries are more durable in use and can have a relatively large capacity. Meanwhile, lithium-ion batteries are widely used. A power source of this type does not need any maintenance at all, is devoid of a “memory effect", and most importantly. with a high capacity, the "energy banks" of the battery are more compact than those of "competitors.

Most likely, your power tool is equipped with a nickel-cadmium battery. Because this type of battery (in the context of this article) is the most common. Exclusively therefore, our material is devoted specifically to this type of battery. However, the recommendations below are also valid for the use of metal hydride energy sources. So, the procedure:

But what if the restoration of the screwdriver’s battery did not succeed in full? In this case, you should resort to a comprehensive solution to the problem, which you will learn about from the sections below.

Dismantling the hull of an autonomous power supply

After you have been convinced that the several deep charge / discharge cycles carried out did not give a positive result, and your battery is still quickly discharged during operation, follow the step-by-step scenario. As an example, take a battery for a Makita screwdriver.

Attention: when implementing the last dismantling option, do not use excessive physical force, since it is possible to deform the battery housing plastic. Remember: after the "restoration" work, the container should sit securely in place.

Search for the "weak link": the definition of a failed "banks"

So, the battery for a Makita screwdriver is several batteries connected in series. However, the standard circuit (when the positive contact of one of the containers is connected to the minus of the next “bank”) is used in almost all such devices. Of course, this refers to a stand-alone power tool. So, the algorithm of actions:

Attention: when measuring, you should use a simple device, which consists of two wires and a load resistance of 0.5 ohms. As a result, you will receive the most plausible data on the status of the batteries involved.

As you already understood, the device of the screwdriver’s battery is no different. Nevertheless, the serial circuit of the connected batteries can have an additional component in the form of an installed thermistor (heat sensor), the principle of which is to open the charging circuit at a time when the temperature reaches a critical level. overheating. However, when repairing a battery, the output rating of the battery used in the power tool should be taken into account, as well as the identity of the typical layout.

In other words, sufficiently powerful batteries for screwdrivers (18 volts. a very common standard) are usually assembled from fifteen nickel-cadmium cells. Each individual capacity has an energy potential of 1.2 V. In the case when the device is equipped with a lithium-ion type battery, the 18-volt battery consists of five cells with a nominal value of 3.6 V. As a result, Li-ion batteries are more compact and lighter than the battery of previous technologies.

Important: do not overheat the case when soldering. Use special acid and catalytic fluxes.

Assembly and initial charging of the screwdriver battery

It doesn’t matter which battery for the screwdriver (Interskol, Makita or Bosh) you restored. The main thing is how well you assembled the energy device. Since any minor error during installation, whether it is a body gap, a “jammed” wire or improper positioning of the contact plates, can nullify all your efforts. Only after you have visually made sure that everything is correctly assembled, you need to completely discharge the "new" battery. The battery for a screwdriver (12V) will sit down very quickly if you “load” it in full. The next thing you have to do is to produce 2-3 cycles of deep charge / discharge. It is worth noting that this kind of prevention should be performed at least once every three months.

Instead of an afterword

The Russian battery for the Interskol screwdriver is not inferior in quality to brand analogues. However, the cost of the domestic battery, without exaggeration, is sparing. For those who are not confident in their abilities, who are “easier” to purchase a new battery than restore the old one, this is an option. Nevertheless, in the case when the structural part of the energy container has exclusive forms (grooves, retainers and specific bends), you still have to devote several minutes of your precious time to technical creativity. Since it may be necessary to repack the battery in the "native" case. Well, you already know how to charge the screwdriver’s battery and what you need to do when the battery does not charge due to long downtime in the discharged state. Effective recovery methods for you and do not forget about security. yours and those around you!