DIY li-ion lithium screwdriver conversion
The lithium battery of the screwdriver has a number of advantages that were absent in cadmium counterparts. Therefore, everyone makes the decision to convert a screwdriver to lithium himself, depending on the circumstances.

A few words about BMS board

It is designed to control the charge or discharge of the battery. CF-4S30A-A is designed for four banks of 18650 rechargeable batteries, giving a discharge current of 30A. The board is equipped with a special "balancer". It performs the functions of controlling the charge of each element separately. This completely eliminates the possibility of uneven charging. For the board to function properly, the batteries for assembly must have the same capacity. It is desirable that they are taken from the same block.

The industry produces a large number of BMS boards that differ in their technological characteristics. For reworking a screwdriver battery, a board operating on a current value of less than 30A is not very suitable. It will constantly turn on the protection mode.

Some boards require a short supply of charging current to recover. To do this, you will have to remove the battery from the case, reconnect the charger to it. The CF-4S30A-A board has no such drawback. It is enough to release the trigger of the screwdriver, if there is no current causing a short circuit, the board will turn on automatically.

The redesigned battery on this board can be charged with a universal charger. The latest models are supplied by the Interskol company with multifunctional chargers.

The connection of the batteries is made in series, therefore, the voltage rating of each cell is summed up with the subsequent one. That is, to get 14.4 volts, you need four cells with a voltage of 3.3 V.

To convert a cordless screwdriver, you only need to buy miniature batteries from a well-known manufacturer. For example, LiFePO4 batteries manufactured by Sistem A123. The cell capacity reaches 2,300 mAh. This value is sufficient for the efficient operation of the electric tool. Cheap batteries made in China won’t do much. They will quickly fail.

When choosing a battery for rework, copper strips are required on the terminals. It is much easier to solder such elements.

The lithium battery of the screwdriver has a number of advantages that were absent in cadmium counterparts.

The energy density of the Li ion screwdriver battery is much higher. The battery with lithium cells is lightweight, with the voltage of 12 volts, as well as the battery capacity, remains unchanged. Lithium batteries charge faster than ion batteries. Safe charging takes about 60 minutes.

Read more:  How to store lithium-ion batteries from a screwdriver

Lithium-ion batteries do not have a "memory effect". In other words, they do not need to be fully discharged to be charged. Among the positive qualities of a lithium battery, there are a number of disadvantages that need to be considered:

Before you disassemble the case of the old battery compartment with your own hands, you should pay attention to the fact that it can be made using the following technologies:

To disassemble the glued block located on a screwdriver, it is most convenient to use a mallet with a plastic head, which excludes possible damage to the device case. Before dismantling, all unnecessary parts of the structure should be removed from the compartment, leaving only the contact plates (their assembly), which are necessary for connection to the tool itself and to an external charger.

Read more:  Which Engine Is Better For A Tiller

To realize the above advantages, it will be necessary to solve a number of issues that arise when converting a screwdriver battery to li-ion, namely:

Important! Taking this circumstance into account, it is necessary to try in advance to adjust the total voltage of several new elements to its old value (the figure below shows nickel-cadmium batteries).

In some cases, it is not possible to achieve the coincidence of the supply voltages at all, which makes it necessary to abandon alteration or look for other products that are suitable for this parameter. At the same time, it is important to observe the measure and calculate the economic feasibility of switching to a li ion 18650 (otherwise, the upgrade may be more expensive than the tool itself).

When using this method, it should be remembered that the elements converted for new operating conditions are connected in series, as a result of which their voltages are added, and the total capacity does not change. It is recommended to use low-melting solder and low-temperature flux during the soldering process, since any overheating of the contacts of the 18650 cells can lead to their destruction.

Important! In the process of soldering batteries in the compartment with which a screwdriver or drill is equipped, it is advisable to use a soldering iron with a power of up to 40 watts. This precaution will keep the lithium battery safe and sound.

After completing the connection of the elements into a serial chain, it will be necessary to solder the wires going to the board with the control circuit (controller) to the positive and negative terminals of the assembly. Particular attention is paid to the cross-section of the conductors used, which should not be less than 1.5 mm². With this size, they will not heat up during prolonged use or charging.

When carrying out this operation, it is advisable to use special insulating tubes with heat shrink properties. Through these insulating products, it is possible to reliably protect the soldering points from unwanted short circuits and oxidation (see the photo below).

The principle is the same as using a computer power supply. It is necessary to purchase an old charger for the starter batteries. The modern fashion for compact impulse chargers has left analog linear devices with manual control of voltage and charge current behind. Therefore, such a device can be purchased on the automotive market for a symbolic cost.

It’s good if the voltage can be adjusted smoothly – in this case, your makeshift power supply will fit any screwdriver.

Converting it to a power tool is reduced to connecting the input of the electric motor to the power terminals of the charger.

If your tool is not too powerful, you can place the power supply in a handle or case from damaged batteries.

We build in a ready-made power supply

To do this, you need to purchase a ready-made block with suitable characteristics and dimensions. There is enough of such stuff on the radio markets.

Take the body with you and go to the fitting. When the required power source is purchased, we carefully separate it from the case. 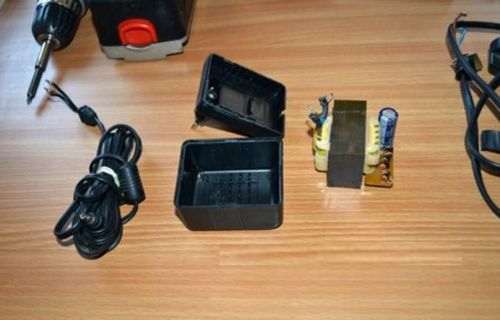 We place the screwdriver in the battery box. All components must be securely fastened.

If necessary, extend the wires between the control board and the transformer. If the circuit touches the metal parts of the transformer during operation, a short circuit will occur.

Since the space in the case allows – separate the board and the transformer for better cooling. Whichever quality power supply you choose, the load will be high and overheating is possible.

It will not be superfluous to fix additional radiators on the power control microcircuits. Operate the screwdriver for a long time, disconnect it from the mains and touch the radio components on the control board.

You yourself will understand which elements need heat dissipation. Holes for air circulation can be made in the housing.

Redesigning the power supply unit with your own hands will not take much time, and the cost of the purchased module is incomparable with restoring the battery’s performance.