All vibration units have additional devices that make work easier or provide additional protection. In order to move the machine to a new place of work, the presence of wheels and a folding handle will make this task easy to carry out. 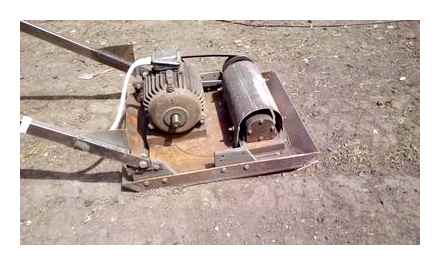 Various covers will protect the machine from the ingress of particles of the compacted surface. The plate wetting system is effective when rolling hot asphalt. Without it, it will stick to the top layer.

Strengthening the bottom in trenches or compacting the soil in narrow places is almost impossible without providing reverse motion.

How to make a gasoline vibrating plate with your own hands

In early spring, when the temperature rises above zero, summer cottages and backyards begin to come to life. Someone is engaged in garden work and preparation for planting, and some have started repairs or construction. As a rule, it is impossible to do without earthwork: either tamp the track under the tiles, then strengthen the bottom in the ditch. Here, a vibrating plate made by yourself and according to your own drawing will come to the rescue.

The main element of the vibrating plate, from which the creation of the installation begins, is a metal base.

There are steel and cast iron samples, however, at home, the use of cast iron is impractical.

It is capable of cracking, does not lend itself to welding, is fragile.

Usually a steel sheet with a thickness of 8 mm or more is used. Additional elements are installed on the surface of the base to increase the mass.

They also serve as the basis for installing the engine and vibration mechanism. In most cases, this is a conventional shaft mounted on two bearings, on which a load is attached in the longitudinal direction. The rotation of the shaft creates a driving force, which, due to its own weight and inertial force, generates frequent short-term loads on the ground.

The efficiency of the vibratory plate depends on the weight, the area of ​​the base and the mode of rotation of the eccentric shaft. A slab that is too spacious is not capable of creating a lot of pressure, since the weight of the installation is distributed over the area and reduces the specific pressure.

A small base gives more efficiency, but it works too selectively, pointwise. This mode does not allow to obtain uniform soil compaction over the entire area of ​​the site. The rotation of the eccentric shaft creates a significant load on all structural elements. Too intense vibration can destroy the vibrating plate, have a negative effect on the operation of the engine, and negatively affect the well-being of the employee.

To understand how a vibratory plate works, you first need to consider its circuit and device. The structure of the unit with a vibration shaft consists of the following components:

Then the vibrational impulses go to the plate itself, which thereby seals the surfaces. Either electric motors or gasoline engines are used as a driving mechanism of a vibrating machine for soil compaction. Typical models are distinguished by such important indicators as the rated power of the engine, the vibration force it develops, as well as the mass of the unit.

The vibration mechanism of the vibrating plate, or vibration exciter, can have two design options:

Read more:  What Oil Should Be Poured Into The Tiller

Plate Compactor. WHY RENT?? BUILD YOUR OWN!!!

The eccentric rotor is mechanically connected to the motor via a drive belt. For this, pulleys are installed on both elements, which are in the same vertical plane. With their help, you can adjust the gear ratio, change the vibration frequency of the installation.

In addition to the main characteristics, there are necessary additions to the mechanisms that facilitate the use of the vibrating plate. One of these additions is the presence of a foldable handle and wheels for transport. These functions are not needed in the application and control, but they help a lot when transporting the unit.

The included clutch cover and belt will extend the life of your machine. The cover is necessary to protect the mechanism from the ingress of pieces of soil or a tamped surface during operation.

The ability to move in reverse with a vibrating rammer. This addition will significantly speed up and facilitate the work of the unit in hard-to-reach and oversized areas.

Additional indicators when choosing units include:

These indicators determine the density of the vibratory rammer, as well as ease of control and operation.

Working surface area. this characteristic determines the pressure of your slab on one unit of the surface of the treated soil. At a surface with a small area, this value will be less. This parameter should not exceed 0.3. The highest characteristic is shown by models with a cast iron base, for bases made of other materials this figure is less.

Vibration force is a measure of the vibration power of the base mechanism. For dense coatings and soils, this characteristic should be as high as possible. Since with weak shocks, hard soil will not be compacted to the required density.

Read more:  How To Assemble Cutters On A Tiller

By the type of fuel used, engines are gasoline, electric and diesel. A vibrating plate using a gasoline engine among specialists is the most popular and convenient. The unit with a gasoline engine has a lower price when compared to a diesel unit, and it works in all weather and industrial conditions.

An electrically driven plate compactor has a lower cost than diesel or gasoline, while its performance and power are at the same level. The disadvantage is that there is not always access to the electrical network.

The diesel-driven unit is the most expensive, but the fuel for it is cheaper compared to the gasoline unit. The disadvantage of this type of drive is the high noise level.

The drive power determines the ability of the vibratory plate to move on a slope and on a viscous surface. The higher this characteristic, the easier the unit moves on the surface. The powerful engine moves forward by itself and does not require additional efforts from the employee. At a low power rating, the slab will bury itself in the ground, especially when working on a slope. The exceptions are models from the first type by weight, in which the weight of the plate and the engine power correspond to each other.

First of all, it is necessary to decide the question of which type of fuel to prefer. It can be a 220 V vibrating plate made by hand, but its use will be limited. The diesel engine is too noisy and heavy, so a gasoline engine is preferable. Such a drive will allow compaction of earth, sand, bulk building materials, tiles and asphalt pavements.

A single or twin cylinder engine is suitable to ensure acceptable seal quality. There are many of them on the market. In the more expensive category, the most popular are the models from Honda and Kipor, as well as the cheaper Lifan, DDE and Champion.