Li-ion batteries of 18650 format The Li Ion 18650 battery is a high-tech battery that has a very high current output, low self-discharge and the ability to recharge at any time.

What are the advantages and why are they so good Li-Ion 18650 batteries and what led to such widespread use of elements of this type? Below we list the main features of 18650 batteries, which distinguish them favorably from cells of other types and compositions:

Read more:  Can I Cut Protective Glass For Smartphone

Lithium 18650 batteries differ in chemical composition (according to the material from which the cathode of a li-ion battery is made). Depending on what the cathode is made of, lithium-ion batteries 18650 are divided into: ICR, INR, IMR, NCR, NCO, IFR. These elements differ in their composition and properties. Let’s take a look at their main properties:

ICR 18650 batteries (LCO, lithium-cobalt). Have a cathode made of cobalt oxides (LiCoO2). The main advantage of ICR 18650 batteries is their low price compared to other subtypes of rechargeable cells. Batteries of this type have a low current output (usually about 1C) and cannot be charged with high currents. Basically, ICR 18650 batteries are used in laptop batteries, low-power flashlights, and other similar electronics. Popular ICR 18650 battery models are: 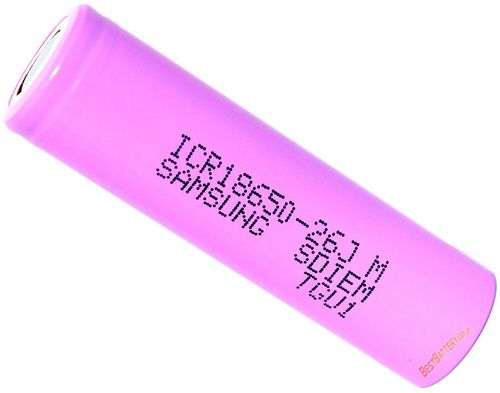 Read more:  How to make a variator on a single axle tractor

NCO batteries 18650 (Lithium Nickel Cobalt Oxide, LiNiCoO2). Batteries with such chemistry are quite rare, they have an average capacity and low current output (6-8A). Representatives of NCO 18650 batteries are:

IFR 18650 batteries (LFP, lithium iron phosphate, LiFePO4). These batteries outperform other 18650 subtypes in several ways. Lithium iron phosphate 18650 batteries can operate at high currents (up to 40C) while maintaining a high capacity, they are durable. They have a large number of charge / discharge cycles (1000-2000 cycles), and they can also work well at low and negative temperatures. But along with the advantages, the 18650 LiFePO4 batteries have several significant disadvantages: a low nominal voltage of 3.2V (other Li-Ion batteries have 3.7V), a rather high self-discharge compared to other lithium-ion batteries. LiFePO4 18650 representatives:

Separately, in a nutshell, I would like to say about 18650 batteries with and without protection:

Major manufacturers make standard 18650 lithium batteries without protection board. This controller, made in the form of an electronic circuit, is installed on top of the housing, slightly lengthening it. The board is located in front of the negative terminal, protects the battery from short circuit, overcharge, overdischarge. Protection is going in China. There are devices of good quality, there is an outright swindle, inaccurate information, the capacity is 9,000A / h. After installing the protection, the body is placed in a shrink film with inscriptions. Due to the additional design, the body becomes longer and thicker, it may not fit into the intended slot. Its standard size can be 18700, increase due to additional actions. If an 18650 battery is used to create a 12V battery that has a common charge controller, breakers on separate Li.Ion cells are not needed.

Read more:  The Principle Of Operation Of A 4-Stroke Engine.

The purpose of the protection is to ensure that the energy source operates within the specified parameters. When charging with a simple charger, the protection will not allow overcharging and turn off the power in time if the 18650 lithium battery sat down to a voltage of 2.7 V.

Lithium-ion battery manufacturing based on company sites Sanyo, Sony, Panasonic, LG Chem, Samsung SDI, Skme, Moli, BAK, Lishen, ATL, HYB. Other firms buy items, repackage them, claiming to be their own. They also write false information about the product on the shrink wrap. There are currently no 18650 Li-ion batteries with a capacity higher than 3600mAh.

The main difference between batteries and batteries is the possibility of multiple recharging. All batteries are designed for a voltage of 1.5 V, the output of a li-ion product is 3.7 V. The 18650 form factor means a lithium battery 65 mm long, 18 mm in diameter.

Battery capacity is measured in ampere hours (Ah) or milliampere hours (mAh). This characteristic determines the duration of operation at normal load until the capacitance drops to zero. These batteries have a reduced memory effect (capacity drop when restoring a partially discharged battery).

Due to the presence of the controller, Li-ion batteries do not allow a complete discharge, which destroys the cell. The overvoltage during charging is also limited, so there is no drop in capacity. Excessive voltage by 4% reduces the capacity by half. Subsequent charge twice more.

These batteries have the largest charge capacity. Their disadvantages are as follows: cannot be used in devices with a large load, cannot be used for quick recharging, the elements can overheat and even ignite.

18650 batteries which is better

The main ones are as follows: