From the Oregon equipment, we can recommend the professional model 519789. The powerful bed and high lift of the abrasive disc allow you to perform work of any complexity. The weight of the unit is 6 kg, the power consumption of the electric motor is 214 W. The range of sharpening of the front corner is from 0-40 о, lateral 0-10 о. The machine is designed for heavy loads, so even after sharpening several hundred chains, the positioning accuracy remains unchanged. 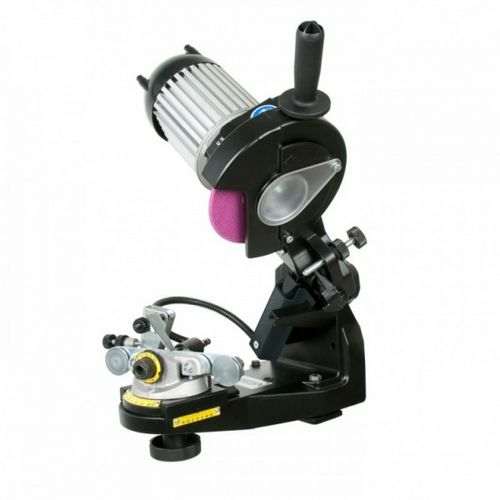 A simpler and cheaper model of the Sadko SCS-85 PRO machine allows you to sharpen most sizes of chains of gasoline saws with a rake angle of up to 30 °. The unit weighs only 2.5kg. Unlike the previous model, it is more compact than professional model, but in its class Sadko is not inferior to products of other companies.

Both models are equipped with an automatic chain centering device when clamping it in a vice.

The efficiency of the chainsaw, how powerfully the tool chooses wood in the cut, depends on the power of the throttle response of the motor and the sharpness of the cutting edge of the tooth. Even the highest quality chains for chainsaws sooner or later lose their sharpness, so about every 2-3 hours of work, you have to sharpen chains for chainsaws with your own hands. If you have the skill and an accurate understanding of the process, you can restore the sharpness of the edge of the tooth on a regular table in the country, using a mini-machine, or using a file for sharpening chainsaw chains.

At first glance, attachments for sharpening chain teeth are not much different from manual turning with a file. The base of the mini-machine is a clamp and two screw adjusters. The device is installed directly on the tire, and with the help of screws the values ​​of the front and side sharpening angles are set. All that remains is to insert the sharpening file into the steady rest and sharpen the teeth one by one.

For chains with hook teeth, a special device is produced that allows you to sharpen using a sector abrasive bar laid inside a plastic case.

In chainsaw hook chains, unlike conventional chains, the cutting edge is located horizontally on the upper plane or back of the tooth. Such edges can be sharpened using a bit or a regular flat file. To sharpen with a nozzle, you just need to put the body on the tire, slam it, close it with a latch, start the chainsaw and press the side lever at the end.

Standard saw chains are manufactured from high quality chrome-nickel steel. For heavy and frozen wood, carbide link chains are recommended. A significant drawback of such models is the increased cost and the need to use special grinding equipment with corundum nozzles.

The main range of saw chains with a 25-35 point angle is designed for standard cross-cutting of wood. Models for longitudinal sawing on the domestic market are present in a minimum quantity.

If necessary, the problem of shortage is simply solved by changing the sharpening angle of standard chains to 5-15. The tire in this version is operated without changing the design.

All information provided is valid for Chinese chainsaws and their accessories. Most of the Chinese chainsaw range are more or less successful copies of the leading European developers, so all the standards are almost identical.

Taking into account the step size, at the moment the chains are divided into several subtypes:

As you can see from the table, the chain pitch is denoted as a regular number (3/4) and a decimal 0.375. This separation is due to the similarity between the decimal values ​​0.325 and 0.375, since the difference of one digit created confusion when choosing a saw. Therefore, at one time it was decided to establish two different designations: decimal and ordinary fractions.

The pitch is stamped in the area of ​​the special cut depth stop on each tooth.

The pluses of chains with a large pitch include:

But it should be borne in mind that a wide cut requires the use of a more powerful motor, which in turn significantly increases resistance.

The advantages of small pitch chains are:

The advantages are achieved due to the large number of teeth and the small distance between them.

All known classification of circuits is based on the peculiarities of their marking, depending on the step, which is designed for specific needs and is produced for a specific power of electrical equipment. For a better understanding of each step type, they should be considered separately.

Read more:  What Oil To Use To Lubricate The Chainsaw Chain

In some situations, owners of chainsaws may experience some confusion in understanding all the chain markings for these tools. As a result, this leads to unsuccessful purchases. The choice of chainsaws is often determined by just a few basic criteria, one of which is the chain pitch. This indicator helps to highlight the future capabilities of the tool, including its cutting speed, and also, according to the norms, must correspond to the level of engine power. How are chains marked? Let’s figure it out!

Step and its dimensions

Where, L is the step length, which in chainsaws characterizes the degree of remoteness of two teeth in relation to each other;

S is the distance between the two outer rivets of the three.

The step size can also be equal to the length of the distance between two adjacent shanks.

Regularity: the greater the distance between the cutting teeth, the deeper they will enter the material being cut

By increasing the chain pitch, it becomes possible to increase the performance of the chainsaw. However, in such a case, the amount of force applied to rotate the drive sprocket changes. And the higher the chain pitch, the greater the power of the motors must be and the more physical forces are expended to pull it when cutting materials.