The throttle valve is installed in the carburetor body and is responsible for increasing the supply of the fuel mixture directly to the engine cylinder. At the moment of pressing the gas, the throttle valve opens slightly, thereby increasing the throughput of the channel and fuel from the carburetor cavity, rushes into the cylinder in a larger volume.

Combustion of a larger volume of fuel increases the amount of generated energy, which affects the power and speed of the processes. The damper is installed on the shaft passing through the entire carburetor body. At the exit of the shaft from the housing, a mount for the gas cable is installed, next to it is a cone-shaped adjusting screw responsible for adjusting the idle speed. By tightening the screw, you can slightly adjust the position of the shaft and the damper installed on it, thereby increasing or decreasing the idle speed, slightly opening or vice versa closing the damper.

Sticking injector valve. frequent breakdown and how to avoid it?

A common cause of carburetor failure on a STIHL chainsaw is a sticking valve in the injector. The reason for sticking is a violation of the storage of the chainsaw, or rather the instructions of the manufacturer STIHL 180 for proper preparation for storage.

As follows from the instructions, before long-term storage, it is necessary to drain the fuel from the tank, then start the saw and burn the gasoline from the carburetor. Failure to comply with this elementary rule entails the following consequences. The forsknui valve, being in direct contact with the fuel, sticks to the body, since the gasoline evaporates little by little and only sticky oil remains. It is impossible to replace the nozzle, since they are not in the repair kit, you can only try to knock it out and rinse it, which is not always possible to do without damaging the nozzle.

How to adjust with your own hands, the nuances of the setting

The carburetor of the STIHL 180 chainsaw, indiscriminately, can only be adjusted for the number of idle revolutions. It is impossible to increase or decrease the fuel supply in different modes using special screws. The manufacturer restricts access to adjustments and does not install these screws. How to adjust the carburetor to the correct idle speed is described in great detail in the manufacturer’s instructions.

In the event of certain malfunctions, and with experience, it is possible to increase or decrease the fuel supply by increasing the clearance when opening the needle valve.

To increase the flow, the rocker arm of the needle valve in the distribution chamber must be bent up, and to decrease, down. This regulates the stroke of the needle and, accordingly, the throughput of the valve.

You should not carry out the adjustment yourself, since this must be done very accurately and in case of an error it is almost impossible to return the initial position of the rocker arm.

Read more:  Which chain is better Oregon or STIHL?

The carburetor choke is installed on the opposite side of the throttle and is responsible for starting a cold engine, it is controlled by the engine control lever. For a cold start, the air damper is completely closed, for normal operation, open.

In the photo, there is a hole in the center, and there is a washer in the middle. this is the air damper

So, the carburetor is designed and manufactured by a STIHL subsidiary called Zama. Original carburetors, on their body have a company logo that guarantees product quality.

The appearance of the Zama carburetor

The STIHL MS 180 chainsaws are designed to make their use as easy as possible for inexperienced users. For this, some of the settings available on more powerful saws have been abolished in the saw carburetor. But the ability to customize is still there, and repair, as well as adjustment with your own hands, is possible.

The STIHL 180 chainsaw (aka STIHL MS 180) is the most popular and recognizable model of the German brand. This chainsaw is simple and reliable in operation. The only component that requires close attention is the carburetor. This article will discuss carburetor adjustment, repair and maintenance. 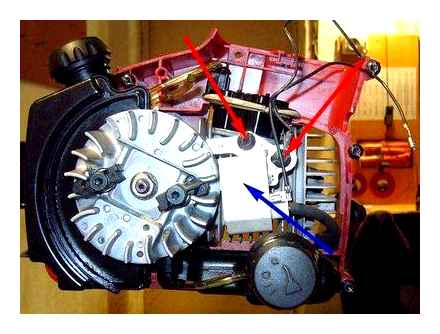 What carburetor is used on the STIHL 180 chainsaw

The STIHL 180 chainsaw is equipped with a Japanese membrane-type Zama carburetor. Some users are confused by the China inscription on the carburetor. Yes, indeed they are going to China. But the plant is owned by STIHL (STIHL) and the quality remains high. However, there are also Chinese copies of the chainsaw with the corresponding carburetors. But these saws are usually cheaper than the original.

The main malfunctions of the carburetor of the STIHL 180 chainsaw include the following.

Read more:  How to start a Stihl chainsaw ms 180

A common problem due to which the STIHL 180 is unstable is the loss of a retaining ring on the throttle shaft, as a result, it begins to wobble and play, which in turn leads to interruptions in operation.

So, you’ve decided to remove the carburetor and diagnose it. The withdrawal procedure is as follows:

A more detailed and visual algorithm for dismantling the carburetor from the chainsaw is presented in the video.

As for disassembling the carburetor of the STIHL 180 chainsaw, everything is simple. 1 bolt is unscrewed on the fuel pump cover and 4 bolts on the main chamber cover. This is enough to change all the necessary components from the repair kit.

After disassembly, the carburetor must be rinsed in gasoline, and the channels and nozzles must be blown out with compressed air. Under no circumstances should the carburetor be blown out under high pressure and in the assembled state. Otherwise, you can stretch the membrane or diaphragm. Carburetor stops working properly.

In order to assess the condition of the filter mesh and membrane, you need to perform the following sequence of actions: 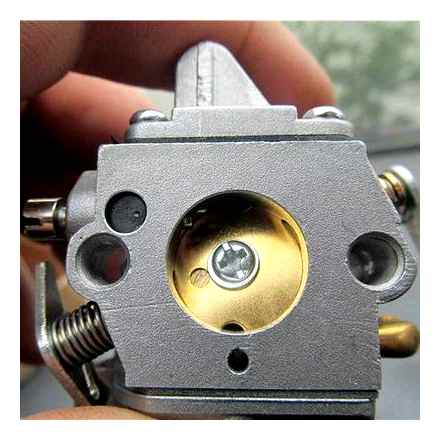 As for the STIHL 180 carburetor repair kit, it includes a set of gaskets for covers, a diaphragm and a membrane, a needle valve, a rocker arm with an axle and a spring.

Zama carburettors are very reliable and easy to operate. Specifically, a carburetor is installed on the STIHL 180 chainsaw, on which there are no screws for adjusting the quality and amount of the mixture, as we are used to. One screw greatly simplifies adjustment.

The diaphragm carburetor has no significant drawbacks. With such a carburetor, the chainsaw works in any position. For side sawing, vertical, etc.

Despite the aforementioned advantages, the carburetor is sensitive to fuel quality. In addition to clean air from the air filter, the carburetor needs to be supplied with clean fuel from the gas tank. But this is not always possible, therefore, at least once every six months, it must be cleaned and blown through.

Read more:  How To Properly Start A Champion Chainsaw

How to adjust carburetor of chainsaw STIHL MS 180

Adjusting the carburetor of the STIHL 180 chainsaw

Usually, special screws are responsible for the quantity and quality of the fuel entering the diffuser, by adjusting which we change the cross-section of the fuel channel. But on the used carburetor of the STIHL 180 chainsaw, to facilitate the operation of the saw, these two screws are missing.

The channels are designed in such a way that the optimal amount of fuel enters the diffuser at all engine speeds. And here the LD screw is responsible for the adjustment, the rotation of which regulates the air supply to the idle jet. How does the engine speed change?

So, to adjust the carburetor of the STIHL 180 chainsaw, you need a regular flathead screwdriver and an electronic tachometer (optional). The adjustment algorithm is as follows:

HOW TO ADJUST IDLE SPEED on STIHL MS 170 180C Chainsaw

If, after all manipulations with the carburetor settings, the chain continues to spin at idle speed, the saw must be returned to the dealer for a service center.

The video below shows a detailed adjustment of the carburetor of the STIHL 180 chainsaw using an electronic tachometer.

How the STIHL 180 carburetor works: device, principle of operation

The main components of the STIHL 180 chainsaw carburetor are the following:

The principle of operation is as follows. The chainsaw crankcase is connected to the fuel pump in the carburetor by a special channel. Due to the alternating piston stroke, a vacuum is created in the engine crankcase. Due to this, the diaphragm in the fuel pump rises and the valve opens to supply fuel to the carburetor.

Further, the fuel passes the filter element (mesh) and through a special channel enters the main chamber. A control diaphragm is installed in this chamber, which regulates the fuel supply by pressing the rocker arm, which in turn lowers the needle valve.

The vacuum generated in the carburetor diffuser by turning the air throttle valves is responsible for raising the control diaphragm. As soon as the engine starts, the mixture must be leaner. We lower the air damper, the vacuum in the diffuser is minimal, the membrane falls into place.

How much does a new carburetor cost

STIHL 180 chainsaws are in great demand in Russia, primarily due to their reliability. The carburetor is no exception and is also quite reliable and unpretentious. Adjustment or repair of the carburetor is required only after long-term operation, not less than 5-7 years (at average workload). The tuning process itself is simplified as much as possible by STIHL engineers, this is the first chainsaw in which only one screw is provided for adjustment.