As Shakespeare said: "Nothing lasts forever under the moon." Household appliances, alas, are no exception. It happens that even the most reliable mechanism fails. And one must be prepared to meet this fact without panic, with firm confidence that there are no hopeless situations. How is the angle grinder arranged, what kind of malfunctions can be, how to check the motor armature, determine the cause of the breakdown and troubleshoot? Knowing the design of the main components of the power tool will allow the master to conduct diagnostics and repair of the angle grinder.

In almost all electrical appliances used in everyday life, an asynchronous electric motor is used. An important advantage of this type of motor is that when the load on it changes, the speed does not change. This means that if, for example, you cut a stone for a long time and without stopping a household angle grinder, there will be no noticeable external signs of engine overload. The speed of rotation of the disk will be constant, the sound is monophonic. Only the temperature will change, but this may not be noticed if the hands are wearing gloves.

With an inattentive attitude, an advantage can turn into a disadvantage. Asynchronous motors are very sensitive to overheating, a significant excess of the operating temperature entails a melting of insulation on the rotor windings. At first, the motor will work intermittently, and then. when an inter-turn short circuit occurs. the engine will stop completely. It is necessary to overheat the engine several times with an angle grinder and, most likely, the anchor will melt. In addition, contacts connecting the wires of the primary winding to the collector are soldered from high temperature, which leads to an interruption in the supply of electric current.

How to determine the malfunction of an anchor angle grinder

Signs of an anchor breakdown in an angle grinder are: increased sparking of brushes on the motor manifold, vibration of the motor at low speeds, rotation of the working shaft in different directions. If such symptoms are present, work with the tool should be stopped. this is dangerous. Suspicions are easy to verify with simple tests.

Visual inspection from the outside

Troubleshooting should begin with a visual inspection of the angle grinder:

Inspection of the device from the inside

If everything is in order with power, but the angle grinder does not work, you will have to open the case to gain access to the motor. As a rule, disassembly is not difficult. But you need to adhere to simple rules that will avoid troubles during the reverse assembly: 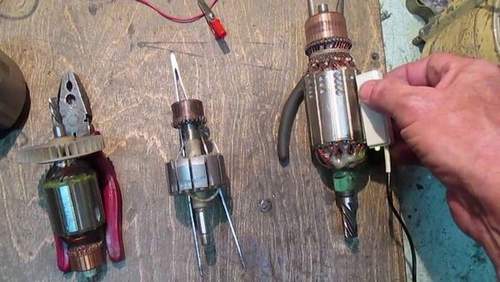 Inspecting the motor is best done under bright light, so that all the small details are clearly visible. The anchor should rotate freely around its axis, properly working bearings should not make a sound during operation. There should be no traces of melted wiring at the anchor, the circuit windings must be intact, without breaks. You can smell the rotor. During interturn closure, the insulating varnish burns and emits a stable specific odor. But for such a diagnosis, some experience is needed.

If a visual examination does not give obvious results, it is recommended to continue the examination with a multimeter. Having set the mode switching toggle switch to the ohmmeter position (range 200 Ohms), it is necessary to “ring” two adjacent anchor lamellas with two probes. If the resistance on all turns is the same, it means that the windings are working. If on some pairs the tester shows a different resistance or an open circuit, there is a malfunction in this coil.

Rupture of the wiring may occur between the winding and the core. It is necessary to carefully examine the junction of the coils with the collector lamellas in the lower part of the armature, visually check the soldering of contacts.

Video: How to Check Anchor Angle Grinder with a Multimeter

Checking contacts with a light bulb

If there is no tester, you can get out of the situation with a simple 12 volt bulb. Power can be any, optimally 30–40 watts. The voltage from the battery 12 volts must be fed to the plug angle grinder, inserting a light bulb into the gap of one wire. With a working anchor, if you rotate the spindle by hand, the bulb should light up without changing the brightness. If the glow changes, this is a sure sign of an inter-turn short circuit.

If the light does not light, then this may indicate the following:

There are other diagnostic methods, but they require more sophisticated equipment, which is usually not used at home. An experienced master will determine the failure with a high degree of accuracy using a “punch” or a simple transformer with a cut toroidal core and one primary winding.

Read more:  How to remove paint from wood with an angle grinder

If damage to the armature is established with guaranteed accuracy, the part must be removed from the electric motor. The motor must be disassembled with special care, after removing the brushes and disconnecting the power terminals. The rotor is removed along with the thrust bearings and the cooling wheel of the motor, they form a whole with it.

If most of the wiring is damaged in the anchor and the balance is disturbed as a result of overheating, it is better to replace it entirely. An imbalance is indicated by increased vibration and an uneven hum during the operation of the mechanism.

How to rewind an anchor. step by step instructions

If the balancing of the armature is not broken, and the problem is only in damaged windings, then such an armature can be restored independently by rewinding the coils. Rewinding a rotor at home requires a lot of patience and accuracy.

The master must have skills in working with a soldering iron and devices for diagnosing electrical circuits. If you are unsure of your abilities, it is better to take the engine for repair to the workshop or replace the entire anchor yourself.

For independent rewinding of the anchor you will need:

Before rewinding, it is important to count the number of turns of wire in the winding and wind the same amount of new conductor onto the coils.

The rewinding process consists of the following steps:

Replacing the anchor yourself at home

Practice shows that if it is decided to replace the anchor with an angle grinder, then it is best to change it together with the thrust bearings and the cooling wheel of the engine.

To replace you will need:

How to remove the anchor

Replacing the anchor begins with the disassembly of the angle grinder. The following steps are taken:

The brush nodes are twisted with a screwdriver on both sides. Brushes are removed.

How to anchor in place

To reinstall the new anchor, the angle grinder should take a new part, and then assemble the tool in the reverse order. The sequence of actions is as follows:

After performing these steps, the angle grinder is ready for use. Replacement of the anchor made.

Video: how to check the angle grinder

Ancient Sufi wisdom says: “The person who is able to get out of a difficult situation with dignity is smart. But wise is he who does not fall into such a situation. ” Observing the rules for operating household appliances, preventing the motor from overheating, you can avoid breakdowns and troubles in the work of an angle grinder. Keeping the instrument clean and dry will prevent its mechanisms from contaminating and oxidizing current-carrying elements. Timely maintenance of the tool is guaranteed to relieve unpleasant surprises during operation.