Some people think that you don’t even need to make any markings here, especially if you are holding a large angle grinder with a large cutting disc. However, afterwards, when aligning pipes cut without marking, problems may arise. In order to avoid them, you can use ordinary electrical tape or masking tape, which is glued around the pipe. At the same time, its edges at the starting and ending points should ideally coincide. If everything is done correctly, after cutting, the two pipes will be combined, forming a perfectly flat line, without unnecessary gaps. 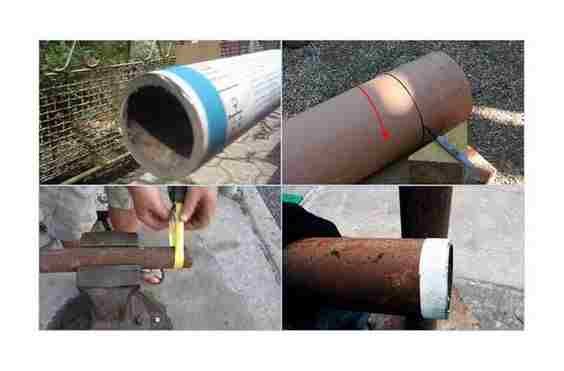 With the help of electrical tape, marking is quite simple.

How to cut thin-walled pipes

Another type of pipes are thin-walled products. They are usually made from non-ferrous metals such as aluminum or copper. Cutting thin-walled pipes is more difficult, since there is a high probability of element deformation. In this case, you can use some kind of filler, such as sifted sand. As a tool, you can use an angle grinder, a hacksaw for metal or a special machine. It all depends on the specific situation.

Cutting metal pipes is a rather laborious, but do-it-yourself process. At the same time, work with round pipes does not fundamentally differ from cutting a profile pipe. The main thing to remember is that when performing work, you must follow safety rules.

Searching for records using a filter:

Some tips for cutting pipes

Households sometimes require cutting to connect the pipeline at different angles or axially. The main tool for these works is a universal angle grinder and discs for metal.

Thanks to this video, you will learn how to cut a pipe at an angle of 45 or 90 degrees using a computer program:

When dealing with construction or plumbing tasks, you need to know how to cut the pipe straight from an angle grinder. In the article, we will consider quick and easy ways of how to properly cut an angle grinder pipe so that the result is perfect.

Using a container with water

What if we are dealing with a small diameter pipe, and it is necessary to cut the pipe at an angle somewhere near the edge? A deep container filled with water will come to the rescue. Before starting work, it is necessary to calculate the angle of inclination and make a mark on the container. Next, we just have to carefully lower the edge of the pipe into the water and tilt it towards the mark on the container. We take out the pipe, mark the line of contact with the water, and boldly cut along the markings. This method is good for marking a large number of pipes. A ready-made template from a container of water will speed up the process of our work.

Read more:  How to Cut Tempered Glass at Home

Do not think that an angle grinder with a cutting disc is a tool used exclusively for dismantling metal structures and does not require accuracy in work. Rather, the opposite is true. The angle grinder requires the utmost concentration of attention and accuracy in work. This is a rather traumatic tool, and therefore, when working with it, one should not forget not only about the correct marking, but also about the safety requirements.

HouseChief hopes that the methods described in today’s article will help novice craftsmen in performing various repairs. All questions that have arisen during the reading process can be asked in the comments below. In the same place, please describe your experience in cutting pipes, which may be useful to other readers.

Finally, we suggest watching a short video that will tell you a little more about the working methods of the angle grinder.

Techniques for cutting pipes at an angle

Considering the methods of work. cutting straight or at an angle. one should take into account the different material of the products being processed. So, sleeves made of polypropylene or thin copper are easier and easier to cut than thick-walled steel pipes.

Small diameter plastic products are cut at the desired angle using special scissors. At the same time, you can control the angle with an ordinary protractor.

It is very often necessary to cut pipes in the process of working with these installation elements. A popular tool for such cases is the so-called angle grinder. Cuts straight and at an angle with this tool

The most frequent need for installation is cutting plumbing or other pipes at an angle of 45º. Let’s find out what devices can be used to cut at this and another angle.

There is a simple tool, often used in everyday life, mainly for working with wood. It is called. miter box. So, the same device is suitable for cutting pipes, and at different angles. The miter box is commercially available, but if you wish, you can always make it yourself and adjust the structure to the required pipe diameter:

In this way, a template for cutting at an angle of 45º is made. But with the help of a protractor, you can mark almost any angle and make cuts for a pipe cut for a specific angle. The advantage of the miter box is that the tool is suitable for repeated use. Working with the tool is permissible until the walls of the slots are worn to such an extent that they can provide high cutting accuracy. It is recommended to make the walls of the tool from a material of higher strength than wood.

Read more:  Motoblocks neva which one to choose which is better

This looks like a possible design of a miter box. a device thanks to which it is also possible to cut pipes at different angles.

However, a miter box, as a rule, is convenient to use for cutting pipes of small diameters and with a small wall thickness.

The advantages of the method are obvious. simplicity, ease of making a tool (miter box), cost-effectiveness, versatility.

The disadvantages of working with this type of equipment are the need to adjust the dimensions of the miter box to the pipe diameter, provided that an accurate cut is made. That is, for each pipe you will have to make your own instrument.

Also, using a miter box, you can only cut a pipe with a hacksaw for metal or pruning shears (for plastic products). This tool is not suitable for working with thick-walled metal pipes for cutting an angle grinder.

The video shows the calculations and shows a workshop for cutting a pipe at angles of 45º and 90º:

For each individual installation case, you can choose the most convenient and less costly cutting method. The specific choice depends on the material of the pipe, its diameter, wall thickness.

Using simple marking methods, you can get a fairly accurate angle at which you want to cut the workpiece. At the same time, referring to a complex calculation technique, it is possible to cut at non-standard angles with high accuracy.

Do you have any useful article information? Do you have any questions while reading the material or find controversial points? Please write your comments in the block below.

The article was helpful?

How to cook beautiful seams for novice welders

Using the template is not very convenient. you have to make a cut along the mowing line, keeping the angle grinder suspended, which leads to large errors. If you have a welding machine, you can make a simple miter box. guides for the disc of an angle grinder, which do not allow it to go to the side.

For this, a previously made template is used, in the side of which a hole is drilled and a nut is welded. When working, a homemade miter box is put on the profile, a bolt is screwed into its nut and the device is pressed against the profile surface.

an angle grinder with a disc for metal makes a cut, slightly pressing the disc to the side surface of the device. It is clear that with prolonged work, the edges in the miter box are gradually grinded, and although the process occurs simultaneously on all edges, over time, some errors will appear.

To perform a relatively accurate cut, you can use a simple technique, where a regular sheet of paper acts as a kind of pattern. For example, A4 printer paper is well suited for creating patterns.

Previously, the sheet is marked out under a square using a ruler. The size of the diagonal of the square must be equal to the circumference of the pipe to be cut. The excess parts of the sheet are cut off.

Read more:  How To Cut Skirting Boards On The Ceiling With A Miter Box

The easiest way to get a mowing line marking on a pipe is to make a 45 degree cut. A regular sheet of paper is used, which is superimposed on the pipe body in the cutting area

Then the following steps:

This way it is quite convenient to mark and cut pipes at an angle of 45º in the range of diameters from 32 to 63 mm. For better markup convenience, it is recommended to use thick, but soft paper. Paronite and similar materials can also be used.

How to correctly choose a pipe cutter for plastic pipes and how to use it in practice is described in detail in our article.

Competently made patterns for true shape cutting of pipes allow you to make cuts with extremely high accuracy. In this case, the gap between the prepared workpieces is still not excluded. In the connection of metal pipes, it is “closed” with a welded seam, when connecting plastic parts, a specialized cord for soldering is used.

To cut straight across a round pipeline or a rectangular metal profile, use a sheet of plain paper. They wrap the workpiece in such a way that the edges of the paper sheet coincide, after which it is fixed on the part with tape or glue. an angle grinder is held next to the edge of the paper sheet with a thin line, after which it is gradually deepened until it is completely cut.

A metal profile or a round pipe can be cut using a template, putting on them an evenly cut element with a large inner diameter.

The following tools are used for cutting steel pipes in the household:

Manual pipe cutters. Allows you to cut round parts with an even right angle cut due to the cutting edges of the rollers. There are several types of products of this type, consisting of single rollers or a series of them attached to a chain. In everyday life, such devices are quite rare and are more suitable for professional work.

Using a container with water

What if we are dealing with a small-diameter pipe, and we need to cut the pipe at an angle somewhere near the edge? A deep container filled with water will come to the rescue. Before starting work, you need to calculate the angle of inclination and make a mark on the container. Then we just have to carefully lower the edge of the pipe into the water and tilt it towards the mark on the container. We remove the pipe, mark the line of contact with the water, and boldly cut along the markings. This method is optimal when marking a huge number of pipes. A ready-made template from a container of water will speed up the process of our work.