A modern chainsaw consists of many moving mechanisms, which during their direct work are in constant friction. This leads to increased wear of the elements and, as a result, a quick breakdown of the chain tool. To prevent this and significantly extend the life of the used chainsaw, it is necessary to use lubricants. Different oils are used for the factory engine and cutting headset, which vary in composition, viscosity and shelf life. In order to avoid mistakes when choosing a lubricant, a novice gardener needs to carefully study the properties of oils and the features of their introduction into the design of a chainsaw used in the economy.

What gasoline to fill in a chainsaw?

The principle of stable operation of any engine is based on the consumption of fuel. In the case of gasoline saws, this is gasoline of the brand AI-92. It is used for all power units, whose operation scheme initially consists of 2 consecutive clock cycles. 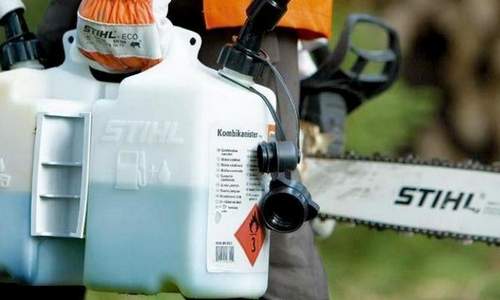 Nowadays it is almost impossible to meet outdated fuel in its characteristics and composition. Nevertheless, Soviet chainsaws continue to work hard on 92nd gasoline, showing no less high efficiency and productivity in the processing of any wood.

Is it possible to pour 95 gasoline into a chainsaw?

Today, in addition to the 92nd gasoline, AI-95 grade fuel is found at gas stations. It is often used by beginning gardeners, believing that the higher the initial octane number of fuel, the better its quality. over, some manufacturers of predominantly Chinese chainsaws allow the possibility of refueling their equipment with this gasoline.

In fact, you cannot use fuel of this brand. It is proved that in the countries of the former Soviet Union the octane number of gasoline is achieved by adding various chemical compounds and additives to its composition, which not only do not increase the quality of gasoline, but also to some extent worsen it.

During the operation of the factory 2-stroke internal combustion engine on the 95th gasoline, most of its additives evaporate, leaving thick tarry deposits on the surface of the CPG and the walls of the muffler. Their accumulation interferes with the stable operation of the engine and the normal outflow of exhaust gases. Because of this, the chainsaw begins to make extraneous sounds, and the vibration during its operation increases markedly.

To prevent this from happening initially, only the 92nd gasoline should be regularly used to refuel the chainsaw used in the household. Even if the brand manufacturer of the tool allows the possibility of using a fuel grade AI-95.

Modern garden chainsaws can be pre-equipped with 2- and 4-stroke power units. The engines of these two types differ slightly in the principle of operation and the scheme of use of the added lubricant. In powerful felling chainsaws with 4-stroke internal combustion engines, the crank group of the engine is lubricated with oil, which is located in the crankcase of the factory engine during the active operation of the gas tool. In a 2-stroke factory ICE, lubricant flows directly from gasoline to the cavity located under the standard piston. this is where the crank group is located, equipped with a pair of bushings and bearings that require continuous lubrication. That is why it is necessary to add engine oil to the gasoline used for refueling for a 2-stroke factory engine.

In order to accurately select a specific lubricant for continuously rubbing ICE parts of a chainsaw, its owner must study the most important material properties:

When developing lubricants to support 2-stroke engines, manufacturers focus on 2 standards: 2T and TC-W3. The second type of oil is used for operation in standard engines equipped with liquid cooling. such as internal combustion engines are equipped with jet skis and boat motors. 2T standard oils are mainly used for the lubrication of engines with constant air cooling. chainsaws, trimmers and other types of household appliances.

Video: How to Dilute Oil Into a Chainsaw

The most popular oils among experienced gardeners and fellers on the market are oils of the following brands:

Read more:  How to Sharpen a Chainsaw Chain Right

When choosing oil for 2-stroke chainsaw engines, it is important to pay attention to its expiration dates. Gardeners should be wary of the manufacturer’s marks that the terms of use of his lubricant can be 3-5 years or more. After all, the additives contained in the oil have a tendency to evaporate and lose their basic working properties. As a rule, well-known brands advise using their lubricant products for 6-12 months, since after this time the oil becomes unusable.

How to dilute gasoline with chainsaw oil?

To prepare a mixture of gasoline with oil, the gardener will need a small container, a measuring cup and a watering can. As a rule, manufacturers of gardening equipment complete their chainsaws with branded cans or canisters made primarily of plastic. However, it is best to use metal cans for fuel preparation. they do not react with oil additives and gasoline components, ensuring the safety of the operator and the environment. In addition, metal cans can stand longer in direct sunlight, while plastic containers begin to melt in hot weather.

The ratio of oil and gasoline for chainsaws

To refuel a 2-stroke power unit, the operator must breed petrol for a chainsaw with properly balanced engine oil. The fuel used must initially be unleaded and have an octane rating of at least 90.

An important role in fuel dilution is played by the proportion of oil and gasoline for the chainsaw. In most cases, the recommended ratio of the components is 1:50. This means that in 5 liters of fuel you will need to dilute 100 ml of oil, or 20 ml of lubricant should be taken per 1 liter of gasoline.

If the operator must refuel and run in a new chainsaw, the proportion changes in the direction of increasing the amount of engine oil used. In these cases, the ratio of fuel to lubricant should be approximately 1:40. It is necessary to prepare the mixture in such a ratio during the break-in, that is, during the procedure you will need to use 2-3 full tanks of oil-saturated fuel. At the same time, if the gasoline mixture is oversaturated with engine oil, and its proportion is 1:30, this will lead to the rapid appearance of a thick layer of carbon deposits on the surface of the cylinder and the piston walls. The result will be a serious breakdown of the crank mechanism.

For more powerful Chinese chainsaws, you need to use more engine oil. over, you need to prepare such a mixture throughout the entire period of operation of chain tools. Since gardening equipment from China has initially increased power, its moving parts lend themselves to more intense friction. To prevent their overheating and premature wear, you need to regularly refuel the saws with a mixture prepared in a 1:25 ratio.

Read more:  How should the chain be tensioned on a chainsaw

How to use chainsaw chain oil?

Many beginner inexperienced gardeners do not give the right value to the choice of oil for continuous chain lubrication. Some initially believe that almost any factory oil, including waste liquid, is suitable for maintaining the operation of the installed saw set. However, such a statement is fundamentally wrong, and to make sure of this, you need to consider the principle of operation of a standard chainsaw lubrication system.

Her work scheme is based on the interaction of the built-in crankshaft and the factory oil pump. When the engine is running, these elements are in continuous kinematic connection. Rotating at medium and high speeds, the crankshaft drives an oil pump, which pumps lubricating fluid from a separate oil tank. Under pressure, the pump delivers oil to lubricate the chainsaw chain to the integrated grooves provided in the guide. Of these, the grease gradually flows onto the driven metal teeth located on the chain. Thus, the used factory oil is responsible for the continuous lubrication of the integrated front needle bearing, the heated surface of the tire and the cutting chain.

Chain oil for a chainsaw must necessarily have high adhesion. This property is responsible for retaining fluid on the tire surface. Oil that does not meet this parameter does not have time to lubricate all the elements of the cutting headset and simply flows out. As a result, only a certain part of the tire and chain lends itself to lubrication, while the rest of the parts remain under high load almost dry.

Experienced loggers and gardeners are advised to regularly use the following oils to lubricate the cutting organs:

Well-known manufacturers of gasoline garden equipment do not recommend the use of oils such as Litol. All additives in these lubricants are lost during short-term operation of gasoline-powered tools at higher speeds. This leads to rapid heating of the cutting headset elements, their regular jamming and failure.