How to disassemble a Makita 2450 Peorator Barrel

You have reached the steel ball with a diameter of 7mm.20.

Now you can remove the mechanical housing It is black. Use an electric screwdriver to remove the four screws from the end of the housing.

With your right hand on the black housing, press with your thumb on the end of the shaft from which you dismantled the chuck. The plastic case can be easily removed.

To disconnect the mechanical end from the electrical end, first remove the brushes.Remember! In the lower part of the body, the rotor is held by electric brushes that must be removed.

Once you have checked that the electric brushes are disconnected from the lamellae of the rotor, use a screwdriver to pry open the metal body of the rotor at the border of the green plastic body. 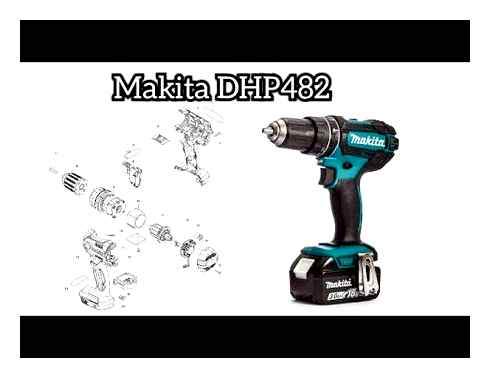 You’ll get a mountain of clean parts like this. Now carefully go through the parts, discard the rubber rings and get new ones.

Mechanical malfunctions on the Makita 2450 and Makita 2470

Repair of the torch chuck to replace the dust cap and rubber ring, as well as the conical spring and the steel ball that provides clamping of the working tool (auger). This is indicated by the fact that the working tool? the auger is not properly held in the chuck.

The main cause is wear on the steel ball 7.0 pos.20, art. 216022-2. Ball wear is caused by contamination of the barrel bore due to dust and dirt entering the bore.

The general view and design of the Makita chuck is shown in the photo below.

Repairing a Makita 2450 with your own hands is easy. Disassemble the chuck, free it from the old grease, discard the rubber parts, replace the defective parts.

complex faults require knowledge of the mechanics of the Makita 2450.

Once you have determined the nature of the malfunction in your Makita rotary tool, start disassembling the mechanics, called the gearbox.

Disassemble the mechanical part according to the attached video. Remove the old grease. Carefully inspect all parts, their integrity, level of wear and tear. All rubber products must be replaced during any disassembly.

Let’s look at the repair of the perforator barrel. Let’s disassemble the mechanism completely. Video disassembly, lubrication, and reassembly of the Makita Peorator

Remember! The rotor is held in the bottom of the housing by electric brushes, which you must be sure to remove.

The next step is to detach the rotor from the removed mechanism. The rotor is separated from the mechanism simply by pulling it out, as it is held in place by the friction of the two helical gears.

Now we have to separate the shaft of the striker.

The rubber rings wear out the most often, the barrel pos. 24, compressor spring pos.18. and cylinder parts. Here’s how the barrel parts wear out and deteriorate if the tool is not used properly.

Let’s look at the most difficult malfunction, the failure of the percussion mechanism. The characteristic signs of failure of the impact mechanism are absence of impact and an unpleasant noise of the operating peorator in the “Impact” mode.

This fault is most common on machines that have been subjected to excessive pressure while in use.

After disassembling the gearbox, remove debris and pieces of foreign objects. Find the faulty part and clean everything from the old grease.

Discard the damaged parts, replace them with new ones, cover them with a thin layer of grease. Parts are ready for reassembly. But we’ll talk about that in the next article.

How to find electrical problems

Checking electrical continuity on your Makita torch. To repair a Makita 2450 or Makita 2470 peorator with your own hands, you need to arm yourself with tools and appliances. Any tester, screwdriver set, wrenches, hammer, and a wooden trivet will do. It is good to have a screwdriver with a built-in phase indicator. 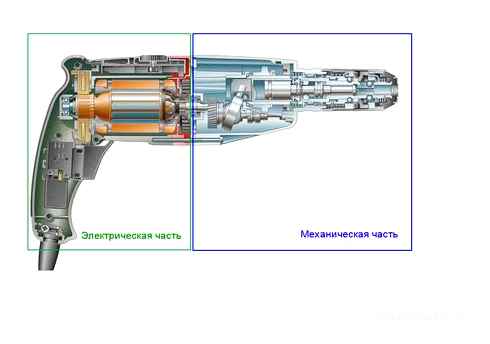 The back cover (usually black) of the torch is easy to remove, you just need to unscrew the three screws with an electric screwdriver or a screwdriver.

Remove the cover and use a screwdriver to disconnect the wire ends from the electric brushes. Using a tester or a homemade device, popularly called “arcashka”, determine the integrity of the wires and the proper operation of the switch.

A few words about a simple control device called a “harness”. The device consists of an LED or a bulb from a lamp, a thumbtack battery and two pieces of wire. The entire electrical circuit of the control device is a series of connected parts. Connect the battery to one end of the LED or light bulb, connect wires to the free ends of the LED and the battery. You have a versatile device for checking the integrity of electrical circuits.

Replace brushes when brushes are worn out or have poor contact. Can be detected by brushing the points on the brushes.

Failure to start the machine could be caused by abrasion on the reversing switch. Fixing such a malfunction is very simple.

The disassembly process is not complicated, it is important to follow the whole sequence step by step, so that you can then properly put everything back in place:

When this process is complete, continue disassembling the mechanical unit of the percussion unit: it is necessary to remove a pair of bolts located in the housing. Then the intermediate shaft must be disassembled. To do this, the following parts are pulled out sequentially according to the scheme:

Read more:  How to Disassemble a Coil on a Trimmer Video

After dismantling the electric parts, the stator, the switch, the rotor, the carbon brushes and the brush holder are removed.

Important! Before you disassemble the Makita hr 24 50 peorator, experts recommend preparing additional tools that may be required during the procedure.

The assembly of the device is carried out in the opposite order of strictly according to the list. It is recommended to apply fresh lubricant to all parts beforehand, clean the body with gasoline. If necessary all defective parts are replaced with new ones.

The structure of a Makita torch

Among users, the Makita peorator has established itself as a tool with the greatest functionality. It is durable and requires no special skills to use, lightweight and comfortable during operation.

A special protective system has been designed to limit the spread of dust. When cleaned and replaced on time, the tool will operate accurately for the life of the tool.

Makita found widespread use among people who prefer to do repairs themselves. The tool is easy to use, the financial cost of maintenance is minimal, it is inexpensive.

To ensure that the torch will last and not break down in six months because of excessive loads, it is recommended to choose equipment with regard to its performance parameters

There are the main points to pay attention to

Impact force of the drill

This is the main performance parameter of the equipment. This parameter is measured in joules. What is meant here is not the pressure on the handle, but the features of the device, with what force it will hit the concrete or other surfaces. material. One of the parameters that is responsible for the depth of drilling. 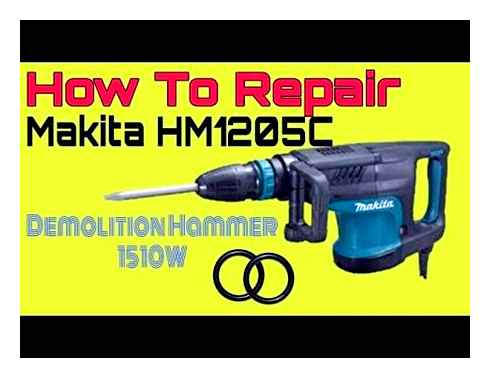 Shock frequency is the second important operating parameter of the rotary drilling machine. If the impact force is large, but the frequency of impact is low, then the work will go slowly.

Drilling depth is affected by the impact force and frequency. And the power and rotation speed of the drill chuck is an important parameter on which the speed of processing thick surfaces depends. Powerful motor is needed for fast rotation speed.

When selecting power parameters it is worth paying attention to the diameter of the drill. High rotational speed is justified if a thin drill is used in the work. And a thick drill at high revolutions will wear out quickly

A thick drill bit will wear out quickly at high RPM.

Each torch model has several operating modes. This is a feature of the tool. If the model has two modes of operation, rotation and rotation with impact. Three-mode modifications can work only on impact.

Shape and weight of the body

Equipment of this type is used in work in different conditions, so the shape and weight of the body depends on the productivity and rapid fatigue of the worker. Lighter models have a horizontal motor. They are the best option for installing a suspended ceiling.

Peorators with an upright motor have more weight, but their housing is more compact. They are more productive for wall drilling. The heaviest T-gear models have been developed for pavement work.

When choosing a battery-powered gator you need to look at the battery capacity. The duration of operation of the equipment depends on it. For frequent use, it is worth paying attention to models with a battery capacity of 3-4 A

Read more:  How To Cut Plexiglass At Home

The next steps are as follows:

For the last operation use a wooden mallet or a hammer with a rubber mallet. By tapping lightly on the housing, it is necessary to force the stator to extend beyond the edge of the housing. As soon as there is a part that can be held with the fingers, the hammer can be set aside. Next the stator can be easily removed by hand.

Be aware that damage to the rotor and stator is considered a serious problem. Trying to do this yourself without the proper expertise can only lead to more disastrous results. If desired, you can perform a diagnosis with a multimeter. And service maintenance is better to entrust to an experienced master.

Is it worth to repair the device yourself or turn to a service center? This question many people are interested in. If you want, you can easily cope with the problems at home, replacing the necessary parts. Not always the service specialists will fix the error quickly, and you will have to pay a lot.

In some cases, the services carry out a replacement only for licensed parts, which also cost a lot, so you have to “splurge”. It is best to check the device completely by yourself at first, and only if you can’t do everything with your own hands, visit the service center.

Makita Peorator. a great device for working at home. If necessary, you can cope with the arising problems yourself, disassemble it and replace the necessary parts.

Master of Architecture, graduated from Samara State University of Architecture and Civil Engineering. 11 years of experience in design and construction.

Appropriate care and periodic cleaning will greatly extend the life of the tool. To reduce the risk of malfunction, it is important that you observe a few rules of operation.

How to troubleshoot a Makita torch. the following video.

Remove dirt from the brush holder grooves and install the brushes by securing them with clips.

Now it’s time to test the performance of the torch. Connect the plug to the socket, switch on the drill for a short while and check the fitment of the speed regulator button. Once you are sure the tool is working properly, turn it off. Move the selector switch to the “kick” position. Do not insert the tool. Check that the tool works in this position. At the same time you have checked the operation of the mode switch.

Now you can check the placement of the speed regulator button, make sure the pins are securely fastened, and then install the cover plate.

The cover is fastened with three self-tapping screws M×4 of different lengths.

Connect the unit to the 220Β mains and check in all modes. Your Makita 2450 or 2470 is assembled and working properly!