Converting a Makita screwdriver to a lithium battery

There is a Makita screwdriver with a 1.3 A / h battery and a voltage of 9.6 V. To change the power source to a lithium-ion one, you will need 3 18650 components. Alteration will give the old tool new opportunities: power, as the operating voltage rises to 10.8 V.

The design will require the use of a BMS, a control controller that maintains the lithium cell operating mode within operating limits. With this breaker, each cell will be charged evenly without exceeding 4.2V, lower voltage 2.7V. A built-in balancer is used here.

The parameters of the controller should accompany the operation of the instrument when the operating current rises to 10-20 A. The Sony VTC4 30 A board, designed for a capacity of 2100 A / h, can ensure operation without shutdown. Of the 20 amperes, the Sanyo UR18650NSX accepting energies of 2600A / h is suitable. The board is needed for 3 elements, which is marked in the 3S classification. In this case, the board must have 2 contacts, plus and minus. If the conclusions are designated with the letters P-, P, C-, they are intended for later models of screwdrivers.

A step-by-step instruction on how to convert a Makita screwdriver to lithium batteries looks like this. 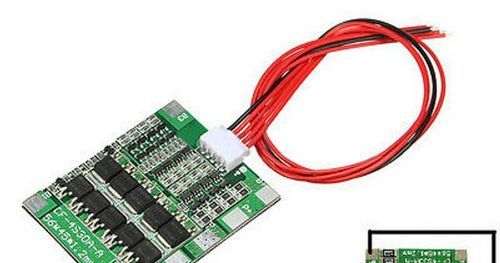 In a screwdriver with an old DC9710 charger, after charging the 18650 lithium battery, the red LED on the panel will turn off. The built-in controller monitors the charge level.

The Makita DC1414 T charger is used to charge 7.2-14.4 V power sources. While charging, the red light is on. But when charging a lithium battery, its voltage does not fit into the standards of salt products, and after 12 V, the charger will flash red and green. But the required charging is already there. The screwdriver is ready for use.

To unscrew the module, select a screwdriver that is suitable in shape and length. It is very easy to disassemble the unit, for this you need to unscrew the screws and detach the case. It is necessary to remember from which holes the screws were unscrewed in order to screw them into place during assembly.

The battery case is fastened to the device in 3 ways:

Some models use several combinations of fasteners with different types of fasteners: for example, screws and glue.

How to disassemble a screwdriver battery

To understand how to disassemble the battery of a screwdriver and not damage it, you should adhere to some simple rules. The battery is disassembled in order to replace the batteries or transfer it to another type of nutritional element: for example, change the nickel batteries to lithium ones. Disassembly operations must be accurate, accurate to avoid damage to other important elements of the screwdriver and to ensure proper operation of the tool in the future.

Replacing batteries in a screwdriver with lithium

Also, more lithium cells will give more capacity. This means more operating time of the screwdriver.

And the last preparatory stage is choosing a controller. According to its characteristics, it must correspond to the rated voltage and discharge current. That is, if you decide to assemble a 14.4 volt battery, then choose a controller with this voltage. The working discharge current is usually chosen to be two times less than the maximum permissible current.

First you should think about whether I need this alteration? After all, it will be a frank self-propeller and in some cases can lead to failure of both the battery and the screwdriver itself. Therefore, let’s consider all the pros and cons of this procedure. It is possible that after that some of you will decide to abandon the conversion of the Ni─Cd battery for a screwdriver to lithium cells.

Battery appearance. Looks like the original, glossy plastic, high quality casting. If not for the new species, I would have thought it was the original. Well done. The only thing that catches your eye is another sticker that is not branded. And under the sticker there are screws, the original is more difficult to disassemble

Compare with the original sticker (original: 1222 cadmium 2.0Ah) The old battery is already well-worn, has worked well, the sticker will not rub off or wash. The black cross on it seems to hint))))

Battery marking: 3.0Ah, NiMH. The old one was at 2.0Ah and NiCd. This is a big plus, I hope it will be positive in my work. By the way, the old one has been working for 15 minutes, then back to the base.

Read more:  What Is The Difference Between A Screwdriver And A Cordless Screwdriver

Disassembly.
Like any Chinese device, it is better to disassemble it before turning it on. So to speak, beware of possible problems.
To disassemble, peel off the sticker and unscrew three four screws. This photo has already been.

Gently pull out the case, the cells and contacts of the battery open.

The battery assembly makes a positive impression, the package of cells is monolithic. Above is a plastic contact holder.

Here is the labeling of the cells used Ni-MH SCI2017-B.

By the way, the cells are welded with a tape qualitatively, the block seems to be monolithic, does not dangle, drips, traces of rust, no flux.

Satisfied in principle. Plus and minus in place, as shown by the tester. I still trust him)))).
The verdict can be included.
And that’s what has been done.
Two batteries side by side. Weathered and new (left dirty old, right shiny new)

I screwed a couple of self-tapping screws very well, good torque. The battery is fresh, and asks for work. By the way, it was almost fully charged.

I drove a little screwdriver until the battery was discharged. A total of about 4 hours of OSB / plywood sheathing work. For comparison, the old battery lasted 18 minutes, the second battery from the kit no longer pulls such work.

P.S. I have been using the battery for over a month now. So far, no minuses have been identified. After a while I will try to do the capacity test again and compare. And I will try to sort out one old battery for lithium cells. It turned out all the same cheaper than offline.

The reasons for the absence or weak level of charge, as well as ways to eliminate the malfunction, are different:

There is one more reason for the lack of charge, but it is characteristic only for nickel-cadmium batteries, the memory effect has worked, and the battery does not charge, although its resource has not yet been exhausted. In order not to bring it to this, it is important to carry out the charging correctly.

What to do if the screwdriver battery does not charge

Cordless screwdrivers are more convenient to use than mains. They are distinguished by their mobility, independence from the presence of an outlet at hand, the length of the cord. The only drawback is that you need to monitor the charge level for timely recharging. But not all types of batteries allow you to do this, and at the most inopportune moment the screwdriver stops working. And, unfortunately, there comes a time when the battery stops charging.

There are three types of tool batteries: