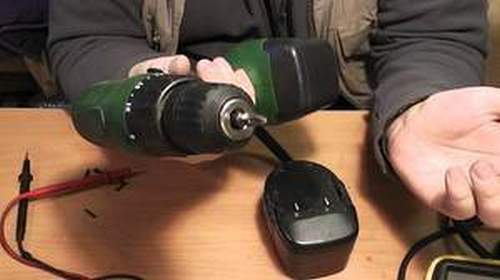 A dead battery for a screwdriver can be charged. But if the discharge occurs more often, and the power decreases, these are signs of a battery malfunction. Usually, the owners immediately try to change the damaged block to a new one. But by comparing how much a single battery for a Bosch screwdriver costs with the price of a new tool with two batteries, they often choose a new kit.

The situation is not as sad as it seems at first glance. Sometimes it is possible to repair the battery of a screwdriver with your own hands without financial costs or with small expenses. To know how to repair the battery pack at home, you should get a voltmeter, soldering kit, screwdriver, penknife, get familiar with the types and properties of the elements used in the battery.

The principles of operation of energy-accumulating elements are the same for capacitors and for batteries. A thin layer of dielectric, electrolyte in the case of batteries, separates the two layers of metal foil, which accumulate bipolar charges. When consumers of electricity are connected between the contacts of the layers, the flow of charges moves through it to the opposite layer, doing the job. Thus, the main characteristic of a battery is the amount of accumulated charge, expressed in ampere hours. The common abbreviation A / h or A / h is applied to any battery.

A charge between the plates generates a static electrical voltage. If a charge is allowed to significantly exceed the rated voltage for which the battery is designed, the electrolyte layer will be broken, which will completely destroy this cell. A lower voltage of the charger will reduce the power stored in it. The second parameter of the battery is voltage. One element, depending on the type, keeps the voltage in the range from tenths to several units of volts.

Characteristics of their types

The difference in the chemical composition of the plates and the electrolyte, dimensions, and the relative positions of the components determine for the batteries not only performance, but also cost. As always: the better the more expensive. For screwdrivers, the optimal price-performance ratio is inherent in three types of metal plates. Two are based on nickel with the addition of cadmium (Ni-Cd) or metal hydride (Ni-Mh), one type uses lithium and is designated Li-Ion (lithium-ion battery). Each type has its own characteristics and characteristic malfunctions.

Nickel-metal hydride batteries are more expensive, but they have lower self-discharge, can withstand more charge-discharge cycles, low-charge memory is not so strong, environmentally friendly production. The charge of the can is 1.25 V. In terms of frost resistance it is softer than cadmium and the shelf life is shorter.

Lithium-ion devices are priced above nickel-metal hydride. They have a high voltage of 3.6 V. The technology pluses. there is no self-discharge and low-charge memory, the capacity is higher than that of other types, the largest number of charging cycles. Cons. the shortest shelf life, the elements are environmentally harmful when disposed of.

Video: How to Find a Faulty Battery in a Screwdriver

The plastic case hermetically seals the contents of the battery with the exception of sockets, metal terminals or contact pins designed for operating charge-discharge currents and, if there are more than two contacts, for charge control.

Since the battery does not work, to repair the battery of a screwdriver, disassembly with opening the plastic case is necessary. If there are screws, they must be unscrewed. In the sealed case, you should deeply scratch the gluing line with a knife and cut or gently drill a shallow hole in it. Then, screwing the conical screw, it is necessary to achieve the appearance of a gap and, helping with a knife or a screwdriver, expand it to the full perimeter of gluing. When assembling after repair, epoxy will seal the gap no worse than before.

Read more:  How Long Does a Screwdriver Battery Charge

The screwdriver battery device is visible when opening the case:

However, it is worth starting the diagnosis before opening the case.

For diagnosis, you need a tester or a DC voltmeter, a charger and a little time. It is better to start the search by measuring the battery voltage of the batteries before and after fully charging. The voltage value of the charged elements must be compared with that indicated on the case and measured before charging. The options for the results of voltage measurements will tell How to fix a screwdriver battery:

Now the defective item for repair is purposefully determined.

A screwdriver battery can be restored by a design feature. a serial connection of identical elements. Such a circuit does not allow the simultaneous failure of all battery cans. So, you need to find one or more faulty elements.

Old batteries lose their capacity from drying out the electrolyte. In a critical situation, when it is impossible to replace the can, the hope of a temporary restoration will be given by heating the can to 60–70 degrees or light compression of the case with pliers.

A battery with a restored or replaced battery will not be superfluous, and from two identical faulty batteries, due to the interchangeability of the elements, one working battery can be assembled and you can wait until the purchase of a new tool.