Features of the screwdriver

A screwdriver means the same drill, but it has a lower rotation speed of the chuck and the ability to adjust the twisting force. Many hours of twisting and untwisting with their own hands have never given pleasure to anyone. The screwdriver will help you to quickly and efficiently tighten and unscrew the fasteners. Also, using this device, you can make holes in materials of different densities, metal, wood and stone. The power of the screwdriver comes from the mains or battery.

The construction device is divided into the following types:

How to insert a drill into a screwdriver?

An indispensable power tool in everyday life with a self-explanatory name, the screwdriver is actively used in construction work. The most common procedure with such a device is to replace the drill. Sometimes it seems that this process is very difficult and practically impossible. However, in fact, replacing a drill in a screwdriver will not be difficult, the main thing is to follow the instructions step by step and pay attention to the details.

The tail of the screwdriver drill is fixed in the chuck. It comes in different sizes, just like the attachments. If the cutting tool is incorrectly installed, the screwdriver can damage the work process and harm your health. For example, the wrong drill may result in holes of different sizes with a damaged surface. The sharp element will cause serious injury if it leaves the cartridge.

Most modern screwdrivers have chucks. They consist of a cylindrical body, sleeve and cams. When the sleeve rotates clockwise, the cams simultaneously press on the drill.

The process of its replacement is simple, but it has a number of individual characteristics. The whole process can be described as follows:

It is not difficult to change the drill, but first you need to pull out the previous one. There are the following options for the development of the situation:

If the screwdriver is working properly, problems should not arise when replacing its working tool the operation is elementary. To do this, you need to take the key, which is designed to loosen the cartridge, and insert it into the recess. Twist counterclockwise. The unwinding is carried out due to special teeth that are on the objects. There is also another option for removing the drill. To do this, turn on the reverse rotation mode on the screwdriver, hold the outer case of the cartridge and press the start button. This way, the drill is easily released.

If you do not have a special key, the drill can be removed using a Phillips screwdriver or a nail. It must be inserted into the recess on the chuck and half of it fixed. We twist the opposite part of the cartridge by hand. However, if such untwisting does not work, then we take a gas wrench or a vice, these tools will help to increase the turning of the cartridge. If the previous options for pulling out the drill failed, then you should resort to heavy artillery. In some cases, external damage makes it difficult to get the drill. In this situation, it is necessary to relax the cams with the help of gas keys and a vice. We completely clamp the cartridge with keys and rotate (unscrew).

Read more:  How to Get a Drill Out of a Drill with a Key

A radical option in the most hopeless situation would be to twist the chuck from the screwdriver. To do this, it is necessary to squeeze it in a vise and forcefully knock out the cutting tool from the inside using a punch. Naturally, after such a procedure, the screwdriver should be taken to the repair. Summing up, it is worth noting that the procedure for inserting a drill into a screwdriver is quite simple and even someone who has never done this can handle it. The main thing in this process is to follow the recommendations. 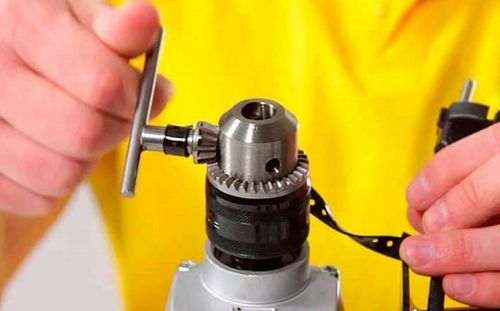 How to insert a drill into a hammer drill, screwdriver and drill

How to correctly insert and pull the drill into a hammer drill, screwdriver and drill

The popularity of the question of how to insert a drill into a hammer drill or an electric drill is explained quite simply: such devices are actively used both in industrial and domestic conditions.

The cartridges are different, as well as the attachments fixed in them.

An incorrectly installed drill can lead to a number of problem situations:

Despite the fact that it is not so difficult to insert a drill into a hammer drill or drill, this issue should be approached responsibly.

Installing the working tool on the hammer drill

As mentioned above, the hammer drill must be checked for operability before installing the drill. To perform this check, the hammer drill is set to drill without knocking. If, after pressing the start button of the device, you hear and feel that its engine is running smoothly and without jolts, then the hammer drill can be used for its intended purpose, having previously inserted a drill or drill into it.

To mount a drill with a cylindrical shank in a hammer drill, use an adapter with a jaw-type chuck

Before inserting the drill into the hammer drill, it is necessary to treat the shank of the working tool with a special grease that will protect it from corrosion. The very procedure for installing a drill into a hammer drill is as follows.

Press until it clicks, then pull the drill, if everything is not removed well

Considering the fact that the chucks on modern rock drills differ in a fairly simple principle of operation, there are usually no questions about how to get the drill out of the hammer drill.

Having removed the used tool from the punch in order to replace it with another, it is advisable to immediately clean its shank from grease and construction dust. The shank of the drill that you are going to insert must also be cleaned and pre-lubricated. A tool replaced in this way will not damage the clamping mechanism of the hammer drill and will last much longer.

Using a perforator, you can not only get a drilled structural element, but also perform processing using a special chisel. You can also install a mixer as a working element of such a device.

DIYers often also have questions about how to insert a drill into a screwdriver or how to change a chuck on a hammer drill. It is quite simple to solve the first question, since the design of the screwdriver uses cartridges of the same design as on drills and hammer drills. But the question of how to properly replace a cartridge on a perforator should be approached competently: it is not easy to perform such a procedure without having certain knowledge and skills.

Correct installation of the drill in the drill chuck

When the sleeve is rotated clockwise, the cams simultaneously approach each other, thereby reliably clamping the shank of the drill to be installed. Accordingly, the question of how to pull the drill out of the drill is not difficult to solve: it is enough to start rotating the sleeve counterclockwise. This will cause the jaws to open, making it easy to remove the drill from the drill. It should be borne in mind that before installing the drill, the cams should be released with a margin, in which case the tool can be easily inserted.

The convenience of using cam-type chucks lies not only in the promptness and high reliability of the tool installation, but also in the fact that drills of almost any diameter can be inserted into them. When using such chucks, there is usually no difficulty in changing the drill bit in the drill. Correctly inserted tools are held securely in these chucks and allow a precise hole to be drilled.

If you begin to notice slippage of the teeth while tightening the chuck, replace the worn-out wrench with a new one

Jaw chucks are used in both industrial and household drilling tools. Clamping devices for household drills are available in two drill diameters: 0.8 to 10 and 1.5 to 13 mm.

In the first case, the sleeve is activated using a special key, on the tapered working part of which there are teeth. The key to activate the clamping mechanism must be inserted into the holes on the side of the chuck body and rotated. There may even be three such holes in some models. Accordingly, in order to loosen or tighten the cams, the key must be inserted into each of them and start rotating counterclockwise or along it.

After loosening the cams with a key, it is necessary to turn counterclockwise the chuck itself, which will increase the distance between the cams to the required value. The inserted tool is fixed in the reverse order: first, the chuck itself is clamped (when it is rotated clockwise), and then the sockets are clamped with a key.

Removing and installing drills is much easier and faster when using the keyless chuck. In it, the sleeve is driven by hand rotation. To limit the retraction force of the cams, they are often equipped with locking elements.

Before inserting the drill, first make sure the drill is in working order and disconnect the power supply. Only then can you start installing the drill.

The screwdriver is used for various construction and repair work, but its main function is to quickly screw in and tighten fasteners: self-tapping screws, screws, bolts, screws.

It helps you tackle a large volume of tasks in significantly less time than using a screwdriver.

Budget screwdrivers of low and medium power are used in the assembly, installation and dismantling of furniture, equipment, the construction of frame structures (partitions, walls, suspended ceilings) and other objects. Powerful hammering tool handles hole drilling.

In addition to the standard operations listed in the instructions for the screwdriver, it can be used for other tasks. With the help of a mixer attachment, they are kneaded with thin solutions. Through a special adapter, the device is connected to an ice auger in order to quickly make holes.

The body of most screwdrivers is made of plastic, which reduces the overall weight of the tool. Inside the case are located:

On the case there is a control panel with a power button, a speed switch. To work in the unscrewing mode, reverse is used. Additionally, the screwdriver can have a backlight, a fuse.

Tips on how to use a screwdriver correctly

A screwdriver is a tool designed to tighten fasteners. With drills and special attachments, it can also be used to perform some other operations.

To work effectively with a screwdriver, you need to set the correct torque. When working with soft materials (drywall), switch it to the minimum mode, when drilling or screwing fasteners into hard surfaces, to the maximum. Before changing the mode, turn off the device and wait until the engine stops completely.

To prevent dust from flying into your eyes when drilling into the ceiling, you can put a plastic or paper cup on the drill. All dirt will collect in it, and it will be easier to control the progress of work.