How to set up a plow on a tiller correctly

In this article, I invite you to familiarize yourself with how to set up a plow on a tiller. As you know, the tiller technique is universal. It can be used for various agricultural work. Tiller, or rather attachments for him on the site "Moe Podvorie" is devoted to a number of articles that you can read if you wish. You can also find out what is the difference between a tiller and a cultivator. A plow on a tiller, like on a tractor, is used for plowing the land. Before starting this type of work, you need to prepare a tiller. To do this, first of all, lugs are installed, with the help of which adhesion to the ground is improved, the plow itself is also installed. The lugs provide the required tractive effort. Note that their weight should be as large as possible. If the tiller is lightweight, then it will slip when plowing. Alternatively, we recommend installing additional weight on the tiller. The optimal plowing width on the tiller is 55-60 cm.

Next, you need to install and configure the plow for the tiller. Adjustments are made to the plowing width, depth and angle of the plow. Let’s consider these settings in more detail. To set the plow in width, the edge of the plow share serves as a reference. In order for the soil to cut through better and the dump of the earth to be lighter, the edge of the share must be level with the inner side of the lug. Setting the plowing depth is performed after installing the tiller on supports with a height of about 10-15 cm. Next, we adjust the plow and make sure that it is located above the ground and at the same time touches it with the base of the share. The correct plow angle during the adjustment process is selected so that the plow base is on the ground.

If plowing with a tiller is done for the first time, then to facilitate the work, you should stretch a rope that will serve as a guide. The straightness of the first furrow is very important. Also, as a tip, you can make the depth of the first furrow less than 10 cm, which will be enough. The support wheel is useful as an assistant. It is located slightly to the left of the center of the plow and moves on uncultivated soil. The wheel will prevent the plow from sinking too deeply into the soil and thus adjusting the plowing depth.

If you figured out how to set up a plow on a tiller, now useful tips for plowing the land will not be superfluous:

Here are all the tips for plowing the land, as well as everything I wanted to say about how to set up the plow on the tiller. I hope this article was helpful to you.

How to set up a plow on a tiller, the main steps before plowing, photos and

Most homeowners take care of themselves and make their job easier by purchasing a tiller. This agricultural technique allows plowing, planting and harvesting, mowing grass and even removing snow. To do this, it is enough to purchase additional weights for the tiller. But acquiring such equipment, not all summer residents know how to plow with a tiller. It’s actually not that difficult. The main thing is to properly set up the technique before doing the work. If you don’t have a plow, you can do it yourself.

The first thing to do is to measure the size of the area to be plowed and the power of the acquired tiller. All these units are divided into types:

When the tiller is selected, you need to correctly configure this technique, and if there were no attachments included, then we will help you choose (see the overview of plows for tillers)

You should start plowing by choosing a strip. We determine visually the middle of the upcoming first page. The rows need to be parallel. We pass the first trial run at a slow speed. At the same time, we observe the plow. It should be perpendicular to the strip of ground. If this does not happen, adjust the plow again.

The depth of plowing with a plow should be from 15-20 cm. Look, if your output is less, then the plow needs to be lowered by one more adjustment hole.

When the first strip is plowed, we unfold the tiller and place it with the right wheel in front of this test strip. It is necessary to plow along the edge of the right furrow, since this way the soil will lie flat with ridges. This type of plowing is also called dump. When plowing, you do not need to push the equipment additionally, but you need to keep it at an angle of 10 degrees to the plow.

Read more:  How to Adjust a Husqvarna Carburetor 137

When you already get an even strip, and also, you have learned how to hold the tiller correctly, you need to increase the speed. This will result in a stronger dump, which means you will have smoother plowing.

For a clearer and more comprehensive explanation of how to make the first plowing, we present you with a thematic one.

Every time before starting the engine, the oil level is checked and the amount of fuel, the lack of both can damage the engine. The diesel engine is fueled with seasonal diesel fuel (for warm or cold seasons). Before starting, check the operation of the clutch, steering wheel. Movements in systems occur with a certain effort.

To start the engine, you need to free the tubes from air with an electric starter, which will subsequently be filled with diesel fuel. During manual start, it is necessary to give access to fuel, to produce gas and a certain amount of rocking by the starter. The decompressor returns to its original state and the engine starts.

For two-stroke engines, gasoline is used (the proportions of dilution with oil are indicated in the instructions). To start the tiller, open the gas tank, direct the handle to start, move the starter several times without turning on the ignition. And only then turn on the ignition to start the engine. Further, the handle should be at the Work mark.

Before the start of the summer season, you will need to adjust the tiller for plowing. Before plowing, rubber wheels must be replaced with metal lug wheels. This must be done so that the unit does not slip during excavation work. The choice of wheels should be taken seriously, otherwise it will not work to plow the soil compacted after winter.

Firstly, their diameter must be at least 55 cm, and secondly, the width of the wheel is selected within 20 cm, otherwise, if the wheels are too narrow, the tiller will lose stability and will swing in different directions. If the diameter is too small, the gearbox will catch on the ground and may become unusable, and it is known to be the heart of the tiller.

For wheels, a monolithic rim is suitable so that the ground does not clog in the lugs. Working with wheels is done by placing the tiller on special stands. The height of the hill directly depends on the depth of the future plowing: for working with ordinary soil 20 cm, with frozen 25 cm. 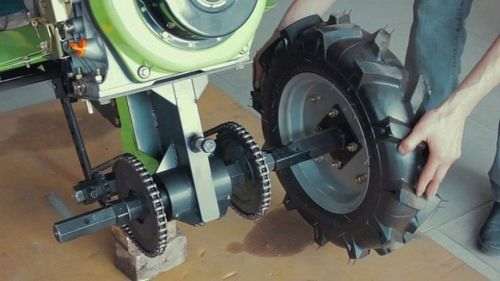 Let’s dwell on such issues of working with a tiller as:

Preparing the tiller for plowing

In photo 4, we can see the device of a standard tiller plow. In some cases, plows have some differences, but in general, most tiller plows have just such a device.

Read more:  What Kind Of Oil To Pour Into The Vibrating Plate

Note:
You can use bricks or blocks as coasters.

After the previous steps have been completed, it is time to make the final adjustment so that subsequent furrowing is easy. To do this, the tiller is placed at the edge of the plot, the plow is driven into the ground and the first furrow is passed. It is important to keep the line straight at this stage so that subsequent passes are also straight. A thread stretched on pegs or some other landmark can help here.

Then, with one wheel, the tiller is placed in the furrow and the plow is oriented so that it is perpendicular to the ground, to do this accurately, use a square. If you are uncomfortable doing this in the ground, place the tiller on a flat surface with a support under one wheel that matches the depth of the furrow. After that, the plow setting is considered complete and you can proceed to the second, third furrow.

Plowing depth and how to adjust it

The plowing depth is the distance the plow goes into the ground while working. You need to set the depth at the distance that the shovel bayonet takes. Otherwise, the following effects may result:

Therefore, it is necessary to adhere to the golden mean.

The depth is adjusted using the bolts that hold the plow shank and the lock together. Accordingly, by moving the plow up and down, this setting is carried out.

Installing the plow on the tiller through the coupling

The hitch is where the plow is attached to the trailer’s hitch. They exist of two types: universal and stationary. Universal is more preferable for work, as it allows you to make some more precise settings.

The plow attachment is a fairly simple hitch for the tiller, which takes its place on the hitch and is fixed with one bolt.

Many people think that by screwing the plow securely onto the tiller, the work will go easier and faster. In fact, the opposite is true. Due to the fact that during plowing the plow is acted upon by forces directed perpendicular to the plane of the blade, there is resistance, which strives to divert the entire unit to the side. With a rigid attachment, the worker has to make an effort, literally pushing the tiller into the ground. Therefore, it is necessary to leave a horizontal clearance of about 5 degrees.