Everything you need to know about chainsaw pitch for efficient operation
Chainsaw chain pitch. What is and what does it affect. How to find out what pitch your saw head and sprocket have. Table with the characteristics of the saw headset.

Pitch is half the distance between adjacent shanks or between three adjacent rivets. 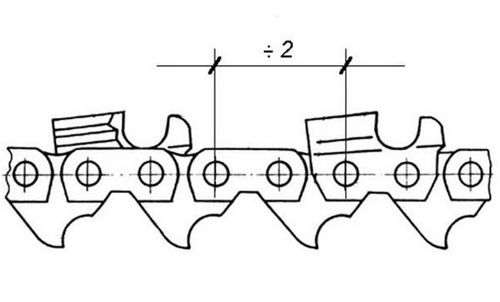 Pitch is a parameter that is available not only in the headset, but also in the sprockets of the tire and chainsaw.

In the case when it is necessary to choose the optimal chain pitch for the chainsaw, it is best to take into account the manufacturer’s recommendations and, based on them, choose the type of saw headset.

If the manufacturer’s recommendations are not known, then you need to choose according to engine power. We have provided the recommended values ​​corresponding to a certain step just above.

It is also worth choosing the thickness of the link, the type of cutting tooth, the number of links. Performance is largely dependent on the angle of sharpening, depth of cut and the shape of the stop teeth. The sharper the restraining tooth, the higher the cutting speed and the lower its quality.

What does the distance between the teeth affect?

In a saw chain, the distance between the cutting teeth directly affects its performance. The more, the deeper the cutting edge can cut into wood, provided the stop is sharpened correctly.

Accordingly, on more powerful chainsaws, it is permissible to install a headset with a large distance between adjacent links and vice versa.

If you put a ¼ ”saw headset on a powerful chainsaw, the performance will drop significantly, and the load on the engine will increase, because the saw will run out of gear and exceed the maximum permissible speed, which can ultimately lead to overheating and seizure of the CPG.

And vice versa, installing a chain with a large pitch on a weak chainsaw will lead to the fact that the saw power will not be enough for normal cutting, of course, this will not entail serious consequences, as in the first case, but it is not comfortable to work with such a tool.

Also, the quality and accuracy of the cut depends on the distance between the links. The further apart adjacent cutting teeth are, the stronger the vibration during work and the lower the cutting accuracy. For a more accurate cut, choose a saw head with a smaller pitch. This factor should be taken into account by those who are engaged in curly carving of a chainsaw on wood.

The chain pitch has a great influence on the so-called "rebound". The greater the distance between the teeth, the greater the likelihood that the chainsaw will bounce.

When choosing a chain, the rule is that the pitch (distance between the teeth) is proportional to the power, but the cutting accuracy is inversely related, i.E. The greater the distance, the lower the accuracy.

Some Important Points When Choosing Chains or Chainsaws

There are other indicators that affect the performance of the tool and the specifics of the work.

Recommended values ​​to take note of:

The cutting profile is of two types: chisel and chipper. The first option has a straight work surface and is more productive. The second type has a crescent shape and reduced productivity. In maintenance, the chipper chain is easier, since it is easier to sharpen, strict observance of sharpening angles is not required. Chisel options are more commonly used in 3/8 and 0.404 ”spacing.

The number of cutting teeth is always determined by their ratio to the number of guides included in the saw bar. That is, the cutter link has two guide links. If such a combination is not observed, this means that the chain is of dubious production.

The concept of a step and its meaning

There is a well-founded rule that the greater the distance between the cutting teeth of the chain, the deeper they enter the material being cut. By increasing the chain pitch of the chainsaw, you can increase its performance. In this case, the force for the rotation of the drive sprocket changes accordingly. It is required to understand that the higher the step, the more force you need to apply to pull it while cutting the material and the more the engine power should be.

Read more:  Stretched Chain On Chainsaw What To Do

Modern manufacturers of gasoline saws use three main types of saw chains with the following pitch values, measured in inches:

The quality and accuracy of the created cut in the material depends on the chain pitch. If the quality of cutting when working with a chainsaw is not globally important, then the accuracy of the cut is sometimes important when breaking up logs or boards, for this you need to take into account the dependence of the saw pitch on breaking wood according to the given markings.

The position of the file when sharpening the chainsaw.

The higher the distance between the teeth, the more vibrations and parasitic forces arise that tend to displace its working tire in different directions, and the rougher the cut created due to breaks in the wood fibers. Accordingly, the effort to hold the saw in the hands is increased.

The choice of gasoline saws is determined by several criteria. One of them is the chain pitch of the chainsaw. This parameter determines the capabilities of the equipment, the speed of cutting materials and must correspond to the engine power, only in this case it will be possible to extend the service life of the tool and reduce the specific consumption of fuels and lubricants.

Step and its dimensions

Where, L is the step length, which in chainsaws characterizes the degree of distance between two teeth in relation to each other;

S – the value of the gap between the two extreme rivets of the three.

The step size can also be equal to the length of the distance between two adjacent shanks.

Regularity: the greater the distance between the cutting teeth, the deeper they will enter the material being cut

By increasing the chain pitch, it becomes possible to increase the performance of the chainsaw. However, in such a case, the amount of force applied to rotate the drive sprocket changes. And the higher the chain pitch, the greater the power of the motors must be and the more physical forces are expended to pull it when cutting materials.

In some situations, owners of chainsaws may experience some confusion in understanding all the chain markings for these tools. As a result, this leads to unsuccessful purchases. The choice of chainsaws is often determined by just a few basic criteria, one of which is the chain pitch. This indicator helps to highlight the future capabilities of the tool, including its cutting speed, and also, according to the norms, must correspond to the level of engine power. How are chains marked? Let’s figure it out!

Taking into account the step size, at the moment the chains are divided into several subtypes:

As you can see from the table, the chain pitch is designated as a regular number (3/4) and decimal – "0.375". This division is due to the similarity of the decimal values ​​- "0.325" and "0.375", since the difference of one digit created confusion when choosing a saw. Therefore, at one time it was decided to establish two different designations: decimal and ordinary fractions.

The pitch is stamped in the area of ​​the special cut depth stop on each tooth.

The pluses of chains with a large pitch include:

But it should be borne in mind that a wide cut requires the use of a more powerful motor, which in turn significantly increases resistance.

The advantages of small pitch chains are:

The advantages are achieved due to the large number of teeth and the small distance between them.

All known classification of circuits is based on the peculiarities of their marking, depending on the step, which is designed for specific needs and is produced for a specific power of electrical equipment. For a better understanding of each step type, they should be considered separately.