The rated power of the internal combustion engine (ICE) is achieved with an optimal fuel mixture. For the quality of the latter is responsible for the carburetor of a motoblock. a metering device (DU), which mixes gasoline with the air entering the cylinder. The amount of torque on the motor output shaft, the amount of exhaust depends on the adjustment. The step-by-step guide and a description of how the fuel system works will help you adjust and tune it correctly.

The fuel system is a component of an internal combustion engine. It is necessary for an uninterrupted supply of fuel to the engine. The system consists of the gas tank, fuel line, filters, and carburetor. The last one doses petrol to keep the crankshaft at a pre-set rpm depending on the tiller’s operating mode. The gas tank is needed to store the reserve fuel. Fuel lines connect all components to each other, and filters clean the fuel from impurities. 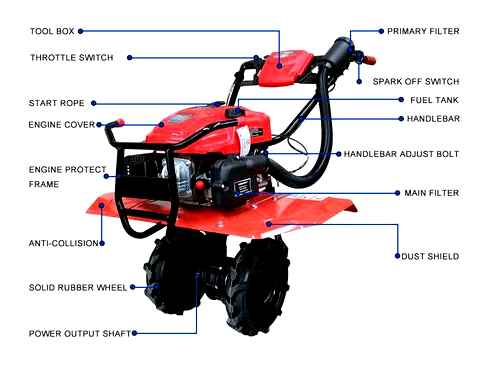 The most complex and critical part in an internal combustion engine is the dosing unit. The device of the carburetor, installed on the motor block, allows the user to adjust the quality of the fuel mixture entering the engine. In general, the DU consists of the following:

The throttle valve is fitted with additional components depending on the trimmer’s manufacturer and application. But, regardless of this, all the nodes work on the same principle.

Before proceeding to the adjustment procedure, it is definitely not superfluous to learn about the peculiarities of the carburetor engine, installed on motor blocks.

Understanding the design will make it faster and easier to understand the intricacies of tuning the internal combustion engine.

Yes, different manufacturers and models of power tillers can be equipped with additional components. But this does not affect the principle of operation.

The key element is considered to be the float. It is the one that is responsible for adjusting the volume of fuel required for the correct operation of the device. The fuel is in the float chamber. When the volume drops, the built-in valve opens. Through it, the missing fuel flows back into the chamber, the float gradually rises, and the valve closes again.

There is an outlet channel in the float chamber of the carburetor. In order for the fuel system to function properly, the amount of fuel fluid in the chamber must always be at the same level. It is literally a few centimeters lower than the outlet channel.

The atomizer originally functions as a fuel distributor. The latter comes from the float chamber into a special mixing tank (also a chamber). It is needed to enrich the fuel with oxygen.

Frequent malfunctions in the power unit of a power tiller are indicative of clogging inside its carburetor. This fuel assembly is constantly interacting with engine oil, gasoline and air. They contain solids, tar and small debris, which can be deposited on the walls of carburetor chambers and inside the fuel channels. Therefore, the carburetor needs to be cleaned regularly, especially if low-quality fuel is used to fill the machine.

Before the direct flushing of the carburetor of the used motoblock you need to dismantle the regular air filter and thoroughly wash it in clean gasoline. After that, the part will need to dry. The operator should also inspect and clean the spark plug. If a thick layer of soot has formed on its cap, it is an indication that oil is leaking.

The further procedure should be as follows:

Immediately after installing the fuel assembly, the operator must make its adjustment and smoothly start the engine of the motor block. Next, the user will need to check the operation of the assembly. If the carburetor is running very smoothly and doesn’t make any unusual noises, it means that the carburetor was properly cleaned and tuned.

Automechanic, specializing in C /A equipment

At the moment mankind uses various special-purpose machines when working on the ground. Here are a variety of devices of varying complexity

Particular attention should be paid to power tillers, as this series of equipment is used everywhere from agriculture to personal gardening. This option of equipment is not complicated, but the owners of equipment need to understand how to adjust the carburetor and fuel supply of a motoblock Agro, but also other common models of equipment in practice

This version is not distinguished by anything remarkable. Standard materials and technology are used in production here. The only thing you can say is the noticeable quality of the Japanese component in comparison with Russian equivalents or similar carburetors from other manufacturers. The device is equipped with a traditional throat, a special flap, and in addition a fuel tap for pumping an enriched mixture. In addition, the design has the necessary elements for adjusting the position of the damper.

Types and methods of adjustment of carburetors

As you know, a single-axle tractor, like many other units of this type, works with the help of an engine. Due to the fact that the engine cannot ignite without oxygen supply, there is a need to use a carburetor. Two types of carburetors are used for the power block. One of them is rotary, the other is plunger. Naturally, each of the mentioned types has its own advantages and disadvantages, the choice depends on the motoblock, its performance and the type of work performed.

There are cases when the carburetor malfunctions (the process is unstable). In this situation the carburetor needs adjustment. How to adjust the carburetor on a power tiller? You can do it with your own hands, following a certain sequence of actions.

Following such instructions, you can adjust the carburetor of a motorblock by yourself.

Features of the structure of the carburetor of the power tiller

The single-axle tractor is a powerful mini power pack with additional equipment for a variety of applications. Often based on a gasoline engine, but less often on a diesel or electric motor. The carburetor is used to ignite the fuel.

Read more:  How to adjust the clutch on a power tiller

There are two main types of carburetors:

The carburetor is made by the following parts: piston, fuel tank, Venuri tube, fitting (acts as a connector), high and low RPM needles.

The piston moves upward, creating a vacuum. The carburetor begins to absorb air, which moves along the venturi tube. The vacuum created allows the fuel to flow from the tank to the engine through the connection fitting. Fuel then travels around the main needle and through the inlet seat into the venturi tube.

Low-rev needle allows gasoline to flow while the throttle trigger is depressed and then only the main needle controls fuel flow.

Demanded farm equipment “Neva”, “Agro”, “Ugra”, “Oka” is in demand due to its configuration. When it comes to the carburetor of the “Neva” K-45 motor-block, it is a reliable device, distinguished by quality and durability. KMB-5. an older model of the carburetor in “Neva” machines. Before buying, it is worth clarifying this nuance in order to buy a really professional helper. Powerful motors on motor blocks MTZ (Belarus-09-N) and “Neva” MB-2 are supported by the work of reliable carburetors, allowing to withstand heavy loads. On the technique “Kadvi” MB-1, “Cascade” and motocultivator “Pchelka” lightweight models of carburetors to optimize the functionality of the engine.

Cleaning the carburetor of a power tiller

Instability in the work of the carburetor of a power tiller most often occurs due to a low level of fuel in the tank, because of low-quality fuel, contamination of the filter on the fuel tap or clogging of internal parts of the carburetor. To clean the motoblock carburetor to remove debris from the filter screen and nipple disassembly should be carried out according to this scheme:

In order to properly assemble the part after disassembly, we recommend that you read

How to adjust the carburetor on a power tiller?

In the technique of different manufacturers, the adjustment of the carburetor of the motoblock is made differently. Below we will consider how to properly and accurately adjust the fuel assemblies in agrichemozaggregates of different brands.

Most Cascade brand models are equipped with KMB-5 carburetors.

To adjust this fuel assembly, you need to:

As a result, the user will eliminate slack in the engine operation and reduce the fuel consumption.

Most often, the factory design of MB-1 and MB-2 models of Neva brand provides carburetors K-45 or their modifications. The order of their adjustment will be the same.

For factory fuel units of K-45P type adjustment should be performed as follows:

Read more:  How to properly adjust the carburetor on a Husqvarna trimmer

If numerous manipulations with the adjustment screw and full throttle setting have not yielded the desired result, it will be necessary to remove and inspect the carburetor. If necessary, you need to repair it or clean it thoroughly.

To adjust the regular fuel unit in the design of models of this brand need:

Adjust the carburetor of a power tiller Agro if there is any extraneous noise from the engine, as well as an increase in the volume of fuel consumed and exhaust gases produced. Timely adjustment of the node with their own hands will improve the quality of fuel, which will lead to an increase in power and efficiency of the power unit.

Adjust the carburetor of the trimmer of the trimmer brand Belarus in the case when its engine does not gain or maintain the required revolutions. It is necessary to adjust the fuel node before the start of the season.

The order of actions should be as follows:

A standard small throttle adjustment screw is initially required by the operator to adjust and set the maximum created revolutions of the working engine during its idle run. Manipulation with this bolt allows the operator to set the built-in throttle directly into the position at which the gasoline power unit will work as stably as possible, consuming the amount of fuel set by the manufacturer.

The need for urgent adjustment of the built-in carburetor of a brand motoblock Bee prompt problems with starting his engine, as well as a significant increase in the amount of fuel consumed by him. Before adjusting the fuel unit, you must remove and clean the air filter of the machine, inspect and, if necessary, purge the fuel supply channels and clean the spark plug.

While carrying out their own adjustment of the carburetor of the existing motobloc necessary:

Actions on the adjustment and maintenance of the carburetor of a motor-block Agros (Agro) is quite simple. Everyone is able to perform them.

It is important to comply with elementary rules, that is, all work should be done in a clean room, do not allow foreign objects and dirt to get inside the device. When tightening screws and bolts, do not apply excessive force so as not to damage the threads, otherwise additional carburetor repairs will be necessary.

In addition to the elements of the power system, you should also clean other parts of the cultivator: