Principle design of a gas cutter

It’s the most popular model by design. The name “two-pipe” comes from the separation of process oxygen into two streams. This is done to functionally separate the work of oxygen.

A second flow of oxygen goes directly to the injector. The procedure in the injector chamber is as follows: oxygen enters the chamber at high pressure and high velocity, as a result of which a rarefied pressure zone is formed in this space. In this case the oxygen is injected.

At the next stage, the formed gas mixture enters the tip. first into its head and then exits through the nozzle between the mouthpieces and forms the very flame in the form of a torch, which heats the metal to its burning temperature. All gas flows are controlled by dedicated valves on the outside of the body. for oxygen supply and separately for fuel gas supply to the injector.

The non-injected or three-pipe gas torch

In this case the construction of the gas cutter is more complicated. Oxygen enters it through two tubes, the third tube is rightfully occupied by combustible gas. In this welding torch, the gases are mixed inside the head, there is no chamber. This system is safer than the dual-chamber model.

This model has a significantly higher cost. In addition to this drawback, the three-tube torch has another nuance: it requires a very high pressure of flammable gas. higher than with the injector device.

How to cut metal with a gas cutter: equipment

On a professional level, an angle grinder and engraver are not always sufficient. For larger amounts of ferrous metal, metal cutting with a gas cutter is already necessary. And about its advantages and how to use it. read this article.

The principle of operation and types of torches

Regardless of the size of the autogenous torch and the variety of heated gas mixture, cutting can be performed by the process of metal combustion in a stream of pure mixture oxygen, injected through a special nozzle in the head of the working area.

The main and principal feature of gas cutting is the combustion temperature, which should be not less than the melting point. Otherwise, the metal, not having time to ignite, will melt all the time and flow down. Low-carbon steels must meet these conditions, but base metals and cast iron do not.

A large number of alloyed steels will also not be amenable to the process of gas cutting. there are significant restrictions on the maximum rate and the allowable doses of alloying components, carbon, impurities, above which the burning process inside oxygen will be the most unstable or even cease to flow.

Read more:  How to cut aluminum profile at 45 degrees

The cutting itself should be divided into two stages:

If we begin to consider the classification of only hand torches, this value will have the following features:

Type of fuel, power and method of obtaining a mixture of gases for the heating flame.

How to choose a better torch?

How a gas torch works. Here is a block of useful information that will help you get oriented better in specifications and technical characteristics of torches in advance: 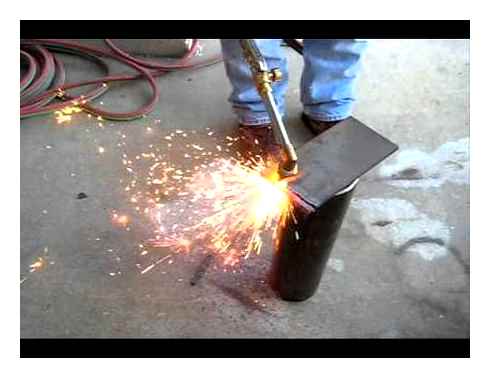 Gas torches for metal are divided according to different criteria. For example, there is a classification according to the gas used, size, type of cutting, design, method of mixing consumables.

It is a metal cutter, which is used for cutting metal parts of great thickness. Acetylene equipment is equipped with additional valves, which allows you to set a high gas flow rate. There are industrial and portable models of torches. Acetylene provides maximum flame temperature. It results in great depth of cut of metal.

Read more:  How to properly cut thick metal with a torch

Propane-fueled equipment is used for cutting alloys, non-ferrous and ferrous metals. Maximum cutting thickness of 300 mm. Propane torches are more reliable, which leads to their durability during active use. Masters pay attention to the safety of such devices. They are often used for do-it-yourself work in private workshops.

You can buy a device for stand-alone operation. Mini torches fit in the palm of your hand. Are a metal cylinder with gas, on which a nozzle with a system of combustible substance supply is screwed on. You can compare a handheld unit to a turbo lighter. With matches, lighter or installed ignition system, the gas is ignited, passes through special nozzles, nozzle, which form a thin jet of high temperature flame. It does not blow out in strong winds, making it easy to use the handheld torch outdoors. To fill a small cylinder, you can use a special nipple for refilling or buy a new full container.

Principle of operation and classification of gas torches

Can the metal be deformed??

Cutting with gas involves a thermal impact on the material, as a result of this deformation changes can not always be avoided. Deformation includes lengthening, shortening, or bending. The cut part can be turned inward or outward.

There are factors that contribute to the deformation of metal:

It is necessary to exclude the action of these factors, otherwise you will have to correct the received defect. There are a few simple methods that allow you to return the workpiece to its correct shape: use roasting or tempering, steel straightening on the rolls.

Deformation can be avoided by pre-fixing and preheating the workpiece, observing the gas mixture feed rate, and adhering to the correct cutting technique. It is important to carry out all stages consistently, and choose a cutting mode based on the thickness and type of material. Do not start cutting at high cutting speeds.

If you do not have much experience, you should start with small billets, and not with cutting products from solid sheets.

Gas equipment used in metal cutting, namely, an oxyacetylene torch, is classified as explosive and flammable. So before you use a gas cutter, you should follow all the mandatory safety recommendations.

For this purpose, the workplace should be equipped with: 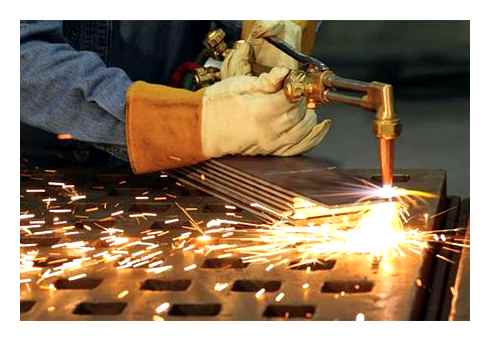 No articles of clothing made of synthetic or other readily flammable fabrics shall be worn when working with the torch, nor shall they fit snugly against the body or have badly worn edges. All of these things can lead to fire, and consequently, to danger to health and life.

Only different grades and types of unalloyed carbon steel can be cut with gas. Stainless steel, nonferrous metals, and various alloys cannot be cut with a propane torch.

Welding with a welding torch and gas.

All standard measurements regarding gas torches are specified in GOST 5191-79. Naturally, the weight and size of the units are directly related to their power. Weight, for example, there are only two values: torches models P1 and P2 weigh 1.0 kg, and a high-power model P3 weighs 1.3 kg and not a gram more or less.

Read more:  How to rebuild the battery of Hitachi electric screwdriver

By the way, type of combustible gas is also related to power and size. If high-powered P3 torches can work only with a mixture of oxygen and propane, the smaller P1 and P2 torches can work with any gas type.

How to properly use an oxygen acetylene torch for cutting

Besides classic models with different power there is a separate category. the so called plug gas torches with a special marking PW. According to GOST they are called very strange: the tips to a gas torch for metal cutting. In general, they differ from traditional torches: mixing of combustible mixture and oxygen is carried out in the tip itself.

The weight of these devices is much lighter than torches. The PB1 weighs 0.6 kg, but the PB2 and PB3 weigh only 0.7 kg each. But do not let this apparent elegance mislead you. Let’s not forget that these are tips to the torch, complete with which they will weigh no less than conventional torches. What is the advantage then?

They can be added to your existing torch and thus you can save some money. And the compactness of the whole set, packed in a special case. And one more important detail, which concerns the nature of the combustible gas. The fact that acetylene is much more expensive than propane.

But for welding metal much more preferably just acetylene: torch with it gives the flame with the temperature higher by 400 ° C than the same with a mixture of oxygen and propane.

Portable models: to a small ship. a small voyage

The structure of the torch.

The market now offers many portable versions of autogenerators. this is how they are positioned. They are sold as an attachment to a compact collet gas bottle. But in their essence and principle of operation, these are torches. Most of them have a torch temperature of less than 1300°C.

There are, of course, and portable models “professional” range. collet torches that give a temperature above. up to 2000. 2500 ° C, which is generally close in performance to the classical oxypropane torch. But physics is physics: even these models don’t have the main component that cuts the metal. oxygen jet, which oxidizes this very metal.

Where a portable gas torch is good? When cutting easily fusible metals or alloys like tin, brass, bronze, copper. But even these “kids” versions don’t cut, they melt. So the compact torch tips are used more for soldering or welding small non-ferrous workpieces. It can be parts of household appliances like refrigerators or air conditioners. Welding, not cutting, in a word.

In any case be careful when choosing such models not always their suggested “portability” in the end is justified.

Advantages and disadvantages of the technology

if the technician has little experience, he should not take on precise operations, since skills and knowledge are required to perform them;