The tooth of the chain planes the wood like a planer, and the thickness of the chips is controlled by the height of the limiter.

Intensive work of the saw leads to a rapid blunting of the chain. Several sharpenings may be required within one day. The problem is aggravated by the fact that the tooth quickly becomes dull when it encounters the ground. It is enough to hook the soil once or twice, and the work can be stopped. the chips become shallow, and the saw ceases to go deeper into the tree.

The earlier the blunted teeth are sharpened, the less material needs to be removed during sharpening, as a result, the service life of the saw chain is longer. Determining the moment when sharpening is already required is quite simple. An important feature is the feed force. A properly sharpened chain retracts into the cut even with a slight pressure. If on the contrary, a chainsaw is forced to saw with an increased feed force, then the teeth become dull. A dull chain can also be recognized if, instead of a large thick chip, only small chips fly out of the cut.

In this situation, the chainsaw should be sharpened urgently. Do not saw with a blunt or defective saw chain. the result is a strong tension in the body, a large cyclic load, and poor cutting results. In addition, this means a decrease in productivity, high fuel consumption and increased wear on all nodes of the chainsaw.

To achieve optimal cutting properties, certain angles are attached to the tooth blades. The tooth back that slopes at an angle back forms the posterior angle of the upper blade. This angle is needed for cutting the upper blade into the wood.

The tapering back of the tooth blade forms the posterior angle of the end blade. This angle is needed for side cutting chips.

The edge of the end blade forms a rake angle with the sliding surface of the cutting link. The front angles of different types of chains vary from 60 to 85 °.

Read more:  How To Properly Start A Champion Chainsaw

The grinding angle or the angle in the plan is obtained by measuring from the upper cutting edge at a right angle to the guide rail.

The rake angle, the angle of sharpening and the angle of the upper blade change when sharpening. These angles have a decisive influence on the cutting ability of the chain. Be sure to follow the prescribed values.

Video: How to Sharpen a Chainsaw Chain Manually

Read more:  How to Stretch a Chain on a Chainsaw Partner

There are lines on the round file holder that allow it to be correctly positioned relative to the chain. The holder is mounted on the sharpened tooth in accordance with the orientation lines. In this case, the plate itself rests on the upper edge of the tooth and the depth gauge, and the file is located under the cutting edge.

Using a toolholder ensures that the file adheres to the tooth at the correct height. There are various tool holders for different steps of the saw chain. The right choice of tool holder in combination with the correct file diameter ensures that the file protrudes 1/5 of its diameter above the tooth back. Use only special files for sharpening chains.

Before sharpening the chain of the chainsaw, it is advisable to fix the tire. When sharpening, it is necessary, while maintaining the position of the holder and pressing the file against the edge to be sharpened, to make several (2-3) turning movements away from you. No need to try to press the file too hard, the movements should be smooth and measured. Turn the file regularly to avoid one-sided wear. All other teeth are ground in the same way. It is more convenient to first sharpen the teeth of one direction, then change position and do the same with the teeth of another direction.

After several sharpening of the cutting teeth, the depth gauge grinds. To do this, a template is superimposed on it so that the limiter falls into the slot, and the tip protruding from the slot is ground with a flat file.

Read more:  What Oil To Add To Gasoline For A Chainsaw

The principle of using a different set for sharpening chains of chainsaws does not differ from the first, although its design has differences.

A round file is also used to sharpen the cutting tooth, and a flat file to sharpen the depth gauge. A special template provides sharpening parameters for both cutting teeth and limiters. In the first case, it is superimposed on the chain so that it falls into its slots. A file overlaid on the template and brought under the cutting edge rests on the guide rollers. The direction of file movement should be parallel to the side edges of the template.

When grinding the limiter, the template is superimposed so that the limiter falls into the slot next to which SOFT (for soft wood) or HARD (for hard wood) is written. As in the case of the first fixture, grinding is performed by smooth smooth movements of the flat file away from you.

Stihl manufactures two modifications of hand-held machines. stationary FG 2 and mobile FG 1, mounted directly on the bus. There are analogues of lesser-known companies, comparable in price with the simpler devices described above, for example this.

The working part of these devices is structurally reminiscent of a beam saw, into which a round long file is inserted instead of a saw blade. FG 1 and FG 2 not only sharpen the chains, but also straighten them, adjusting the length of the upper edge of all the teeth to the same size. on the smallest tooth, which is taken as the control. A rather complicated configuration mechanism allows you to set all the necessary parameters. Sharpening is performed in 2-3 movements, after which they proceed to the next tooth, saving for it all the settings that were made for the control tooth. This ensures the same grinding parameters for all teeth. When grinding the limiter, the round file changes to a flat one.

Simple and easy to use electric grinding machine for chainsaw chains. It has a tuning system that allows you to set the chain at the right angle and bring the disc exactly to the edge to be sharpened. There are machines that automatically clamp the vise when lowering the disc onto the chain. 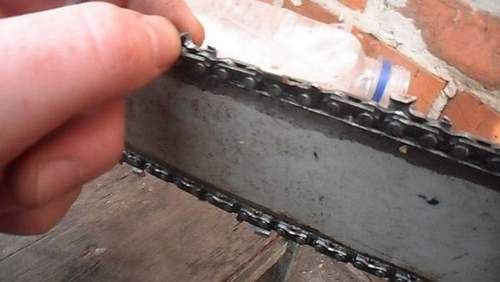