Most of the cordless screwdrivers are equipped with a standard set of batteries. If there are no complaints about a sufficiently reliable and durable tool, then its battery cells should be looked at more carefully, since this is a rather weak point of the device. It’s no secret that without proper maintenance of the batteries, you can simply go broke buying new batteries, the cost of which can reach up to 50% of the nominal price of the tool itself. 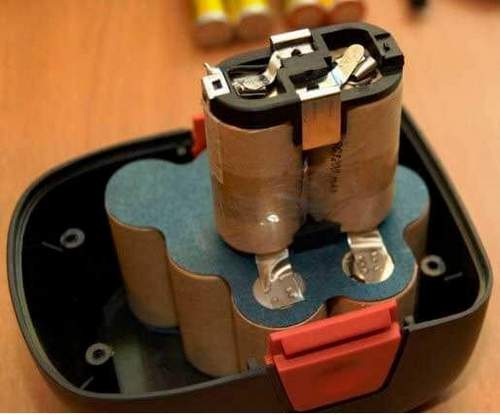 It is reasonable to assume that if there is some option for restoring batteries for a screwdriver, then you need to use it, while saving a significant part of your material budget. Let’s understand what methods allow you to reanimate batteries with minimal labor, to test them for performance.

1. Methodology for determining the malfunction of the screwdriver battery (Video)

If you disassemble the battery case of a screwdriver, then inside you can find serially connected power elements. In most situations, the operating voltage of the electric motor is 18 volts, which consist of 15 can batteries in the battery case. As a rule, no external signs of damage are detected. Therefore, the master faces the task of correctly determining the link in the existing circuit, which has lost its energy intensity.

The performance of the entire battery will lose its effectiveness even in that situation if the system has at least one element that has lost its capacity. However, all the power elements cannot fail. Therefore, by correctly detecting inefficient elements, they can either be replaced or the used batteries returned to working condition. In other words, there are methods to revitalize batteries.

As a rule, in order to accurately determine the malfunction of the battery, two main methods have found practical application:

Consider how these methods work in practice.

Since the batteries have a serial connection circuit, it is important to know that when the batteries are in a charged state, their voltage tested with a multimeter should be identical. To correctly identify the faulty link, you should switch the tester to the DC current change mode and measure each battery (bank) in the system.

If ni cd batteries are used in your case, then the nominal voltage of each unit should be approximately 1.2 V. In the situation of using Li Ion batteries, the voltage indicator should be around 3.6 V.

In general, in order to properly initiate a malfunction, the entire battery pack is first subjected to maximum charge for 6 hours. Then, the corresponding measurement with a multimeter is made, based on the above readings for different types of batteries. If at this stage no distortion is detected, then the battery is connected to the load, in order to completely discharge it.

After making sure that the battery pack is dead, you must again measure with a multimeter each supply battery in the system. This will make it possible to detect unsuitable “banks” with a high degree of probability. The readings of the multimeter in such blocks will be below 0.5-0.7 V. If you have available battery packs for replacement, then resuscitation of the entire circuit is eliminated by banal soldering, removing the old elements with replacing them with new ones.

Video: How to Test a Screwdriver Battery Tester

This method involves the use of several light bulbs or small electric motors that are connected to each power element in a screwdriver battery system.

First, the entire battery is fully recharged. Then, one 3-4 V bulb or low-power “motor” is connected to each “bank”. The method allows without measuring devices to identify inoperative elements in the system that will lose their charge under load the first. Blocks that have lost capacity will certainly reveal themselves.

Read more:  Alteration of the Hitachi 12v Screwdriver to Lithium

If we are talking about ni cd batteries, then for them there is such a thing as “memory effect”. This "painful symptom" is defined quite simply. When the battery quickly discharges after a full charge cycle, and after a short pause continues to function again, this is the correct diagnosis, which can be cured with proper dexterity.

What needs to be done to heal the “memory effect"?

First, the battery is fully charged (preferably at low currents). Then a small load is applied to it in order to achieve complete discharge. This simple trick allows you to activate the internal plates of the battery as fully as possible. As an example of a successful load, you can use a conventional 220 V incandescent lamp at a power of 60 watts. The process of slow charging and discharging should be repeated at least 4-5 times. The result of these measures will be the return of the original battery capacity by 80%.

By the way, if you work on a disassembled battery, where "weakened" batteries are already known, then shock exposure with high current can return them to service. If electrolyte is present in the battery, then you can always restore the battery using this method.

It should be noted right away that not all batteries are subject to the ability to recover. In particular, the “banks” with the typical ni cd insignia can be reanimated with the best success. These batteries are now equipped with most of the typical models of screwdrivers. Of course, in the tool market you can find Makita or hitachi or bosch screwdrivers whose battery is built on a lithium base, but there are not many of these models yet.

In general, if we talk about the serviceability of the battery pack and methods for its restoration, in any case, you need to pay attention not only to the batteries inside the case, but also to make sure that the charger is working. It is likely that the functionality of the power supply has lost the ability to provide the required current when charging.

Read more:  How To Choose The Right Cordless Screwdriver For Home

Many craftsmen, faced with the repair of nickel-cadmium power elements in practice, restore them by adding electrolyte. The battery in the process begins to lose electrolyte, since it evaporates.

Correct the situation helps the physical impact on the battery "can" with a drill. A small hole must be made in the battery body (diameter 0.8-1 mm). Armed with a medical syringe with a needle, a couple drops of distilled water should be injected into the battery. Then the hole is reliably filled with epoxy. This series of measures will extend the operation of the supply element for a few more charge / discharge operations.

Of course, the simplest and most obvious way to reanimate the battery pack for a screwdriver is to physically replace the failed unit with a workable one. Here, even the help of a specialist may turn out to be inappropriate, since even the person who at least once used a soldering iron and was holding a screwdriver could easily perform the operation. The main thing here is to show a little dexterity to prevent overheating of the cans at the time of soldering / desoldering.

Of course, there are quite a few ways to reanimate batteries, but not every one of them is accessible to the common user. If you yourself are not able to extend the life of your screwdriver with a standard battery, then seek the help of qualified specialists. They will make error-free diagnostics and “figure out” how to restore the tool’s battery with minimal labor.