When pruning, you can sometimes do without a miter box. In some cases, this method is even more effective, since the miter box is designed for high evenness of the walls and ceiling. In fact, this is not always true.

Trim the inner corner of the product

First you need to attach the piece to the ceiling. This is done to measure the desired fillet length. After taking all measurements, you can install the skirting board in a previously prepared miter box. Try to install it so that the fillet location is exactly the same as on the ceiling. Hold the skirting board with your left hand and make sure that the fillet rests firmly against the farther side of the tool. The part that is intended to be attached to the ceiling should be on top, and the bottom should be firmly pressed against the bottom of the miter box.

The hacksaw blade should be turned at 45 degrees. Check if this is the case and start cropping. In this case, the hacksaw should be as close to the left hand as possible. Do not press hard on the tool when cutting.

After the part is cut off, proceed with the processing of the adjacent skirting board. It must be cut in the same way as the previous one, only on the contrary, in a “mirror image”.

Attention! When working with fillets made of PVC or expanded polystyrene, start work from the front of the product. Then the final result will be more accurate and aesthetic.

How to cut the skirting board in the inner corners: action plan step by step

Begin installing the skirting boards in one of the corners. If this is your first experience, choose the part of the room where something will stand. Not always, it’s over, the first pancake is lumpy, but it’s still better to insure yourself. To make the corner on the baseboard neatly, work slowly. One was sawed off, checked, adjusted. Let’s move on to the next one. It is better to fix it after the two adjacent corners are assembled. But you should not postpone the assembly too much. 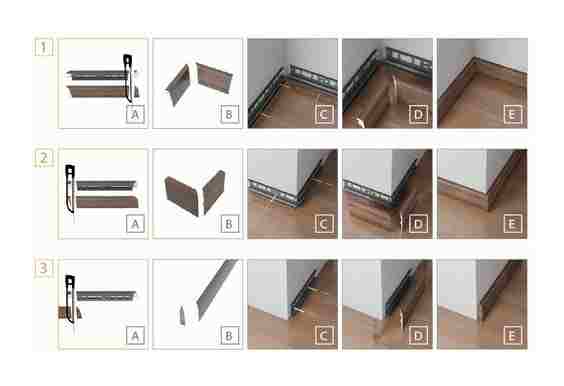 Trimming skirting boards in corners requires some skill. But by making several joints yourself, you can beautifully design complex corners.

How to use a miter box to cut skirting boards? Place the device in front of you, preferably on a table, but also on the floor. It doesn’t matter which side to turn it, it is symmetrical. Insert the bar into the profile, turn it so that it will stand against the wall. When washing down a floor plinth in a miter box, the “wall” is the wall that is farther from you. Once again: press the plinth strip firmly against the back wall in the position in which it will be installed. Insert a hacksaw into the desired slots. You can start sawing.

How to properly cut a corner on a ceiling plinth

Most often, in dwellings, you have to deal with cutting at 45 degrees. You can cut corners on ceiling plinths in several different ways.

If it is not possible to use a miter box in work, you must first properly prepare for work without it. It is best to practice on the fillet ceiling dummy. Skirting boards left over from previous work are also suitable.

Installing baseboard: caulking an inside corner

It should be noted that the method of trimming the skirting board without a miter box is more accurate, as it is possible to more accurately and correctly mark the angle for cutting. This way it is more convenient to cut the inner corners of the skirting boards. True, there are also disadvantages of manual trimming. a fillet made of wood or polyurethane is difficult to keep suspended during measurement work.

If, after all the work done, you notice that the skirting boards are unevenly installed, there are gaps, cracks or other errors in the work. do not rush to despair and redo everything again. Putty or other sealant will help you out. With them, you can accurately fill the voids that have formed, without damaging the skirting boards and their appearance. Fast and convenient, and most importantly. beautiful.

How to cut corners of skirting boards?

To find out, we recommend reading this article. You may also be interested in the material on how to repair stretch ceilings after a cut.

How to dock in corners

If the installation of the first corner is completed, we can assume that you have already learned almost everything. “Almost”, because you still need to learn how to join the corners and cut the planks to length. When some part is already glued and there is a small distance to the corner, how not to be mistaken with the length? The answer is simple: leave stock.

At first, you can cut a piece 10-15 cm longer: it will be possible to redo it several times if something does not work out right away. Then you make a corner in the way described above, try it on dry, adjust everything so that the result suits you. Only then can you attach the already cut strip to the corner and mark the place to which it can be shortened. You need to trim at exactly 90 °. It is not necessary to use a miter box. Just try to put the knife (hacksaw) perpendicular to the surface.

Sometimes the unevenness of the walls or ceiling prevents you from gluing the plinth along its entire length, tightly pressed against the wall or ceiling, or you made a little mistake when cutting the inner corner, and you have a gap. To eliminate these defects, a white acrylic finishing putty is perfect. It can be painted well after drying, and with its help you can gently putty the joints. This putty is sold in a ready-made form, you do not need to stir it yourself with water and worry about non-compliance with the proportions, depending on the manufacturer. If you want to make everything aesthetically pleasing, then spare the money and buy a small jar. According to personal observations, 0.5 kg cans of ready-made putty will be enough for you both for all the flaws in the joints of the ceiling plinth, and for eliminating other minor errors during the repair.

And also for easier trimming of corners, you can use a clerical triangle, it will give you the ability to accurately cut a 45-degree angle.

One of the important factors to consider is the material from which the skirting board is made. Now they are made from PVC. polyvinyl chloride, expanded polystyrene (foam), wood and polyurethane. Depending on the material, glue and baguette trimmer should be selected.

For information on how to make a corner undercut in a ceiling plinth without a miter box, see the next video.

How to Cut & Install Skirting Board, Baseboard Internal Corners

Procedure in the absence of a miter box

How to cut off a fillet corner if you don’t have a special tool. a miter box? And is it possible?

Maybe. To do this, you need to go one of the two options below:

The algorithm of actions is as follows:

For those who are doing this procedure for the first time, experts recommend practicing on trimming skirting boards.

Before gluing baguettes in the corners without a miter box, you need to properly cut the corners:

Important! The cut should go inside the fillet.

You can cut the ceiling plinth in the corners without a miter box, following this algorithm:

Important! Do not make great efforts when cutting the strip, as it will still deform under the influence of the glue.

Ceiling plinth. what is it?

Ceiling plinth (or fillet, in a scientific way) is made from a variety of materials. It can be polyvinyl chloride (PVC), polyurethane, expanded polystyrene or wood.

The highest quality of all of these are polyurethane fillets. They are durable, elastic and moisture resistant.

Styrofoam skirting boards are very similar in quality to polyurethane skirting boards. True, they are not very durable and, under mechanical stress, they can break.

The cheapest option is PVC fillets. However, they are not very elastic and not electrostatic, which is a clear disadvantage.

Ceiling skirting boards come in different sizes and shapes, and can also have a relief surface texture. At the junction of the ceiling with the wall, they are attached, as a rule, with glue.

Important advice! In low rooms, you should not use wide ceiling plinths, but in high rooms, on the contrary, narrow ones. For standard rooms with a height of 2.75 m, fillets are usually chosen, the width of which is 45 mm.

As a rule, special corners are sold along with the plinth, which can be internal or external. If you decide to abandon the use of such accessories and dock the skirting boards on the corners of the room manually, then just knowing how to cut the corner of the ceiling skirting board will come in handy.

So that there are no cracks in the corners of your room, you need to be able to correctly cut the corner of the fillet. This can be done using the following tools:

What is a miter box? This tool looks like a tray with slots made at certain angles. For trimming plastic skirting boards, a miter box with angles of 45 and 90 degrees is used.