Chainsaw fakes can be divided into two types: those that tried to make them look like the original and others that weren’t particularly concerned about the similarities with the original. This story will be about the second.

There are several models of chainsaws that are mass produced by our Chinese friends. We are only interested in three, which can conditionally be called "ChainSaw 4500", "ChainSaw 5200" and "ChainSaw 6300". These chainsaws have parameters, performance and a fairly recognizable appearance. You can see these chainsaws at people who will soon trade in fakes at street intersections and Internet flea markets.

The fake production technology is as follows:

The similarity of a fake to a model indicated on a piece of paper and the fact of the existence of a model indicated on a piece of paper does not play a role. Absolutely. Yes, absolutely! Yes, "it doesn’t happen"but that’s the point. When all this bacchanalia began about 5 years ago, Husqvarna 5200 or Husqvarna 4500 was written on pieces of paper. However, Husqvarna didn’t have such models at all, and the authors of the fakes had to modernize the production. they began to print more plausible labels. So the Husqvarna 365XP and Husqvarna 372XP chainsaws appeared on the market. If you follow the links given, you will find that the fakes not only do not look like real models of Husqvarna chainsaws, but also do not have any logic in the marking. You can stand two different saws with stickers. "Husqvarna 372XP-20" or two absolutely identical saws with different stickers. The top of skill, I consider this fake:

Read more:  Stihl Oil How To Distinguish A Fake 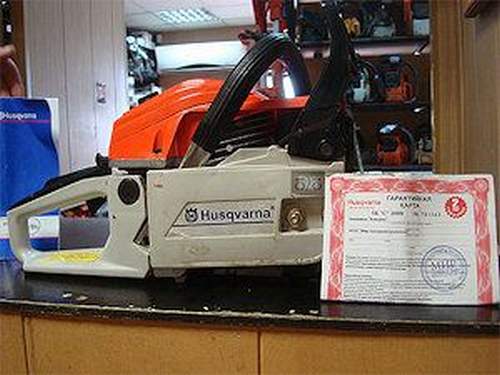 On the chainsaw that was supposed to be a fake Stihl chainsaw (white bottom, yellow top), the Husqvarna label was glued. Yes, this is crazy, but it really works like that. fake sellers do not even care about the credibility of their appearance.

For reference, this is what a real Husqvarna 372XP chainsaw looks like.

This story will be about the person who most often signed "Yuri" and indicated the place of residence of the vicinity of the Moscow metro station "Vykhino". Yuri started like everyone else, with chainsaws "Husqvarna 365XP" and "Husqvarna 372XP", but unlike his street colleagues, he worked in a place of increased danger. the Internet. In the fight against the blackening of his products, Yuri brings to the market chainsaws "Husqvarna 365HP" and "Husqvarna 372HP". All 4 models are exhibited on the Internet with the same photos.

Video: Husqvarna 142 How To Distinguish A Fake

Apparently, our hero was little embarrassed by the fact that the name is read in the photographs "Husqvarna 372XP". This chainsaw was offered at a price of 2500 to 3000 rubles. Same photos, address "Moscow, Vykhino", description and one of the two phones 8-916-016- or 8-915-353- (the ads have all the numbers, I just don’t show everything. pryavashi, however.)

recently, in 2013, I expressed the idea that all ads "Husqvarna 372HP chainsaw" dedicated to fakes and outrage was met "and the examination was carried out?". But Yuri from Vykhino already in 2010 realized that fake is rushing from photographs and works ahead of the curve.

I confess, for the first time during a quick look I bought, and only then I realized what it was. This chainsaw was offered at the previous price from 2500 to 3000 rubles. And again, the photos, name, address, description and phone number indicated that the seller is the same in all lots, and this is our hero again.

Read more:  How You Can Cut Laminate At Home

However, Yuri wants to sit on two chairs and puts both versions of chainsaws on the same classified sites, with the same contact information under the same name "Husqvarna 372HP". Fawn!

NEW! Husqvarna 372HP chainsaw (with a plus sign in the name)

This is undoubted marketing success! Yuri is now not just pushing bullshit. he is the seller of the line of chainsaws and the exclusive distributor of Husqvarna chainsaws. HP (do not forget that he still has the Husqvarna 365HP). And it doesn’t matter what is written on all his chainsaws "Husqvarna 372XP".

And again, our hero does not stand still. The Husqvarna 372HP chainsaw has outlines similar to the real Husqvarna 372XP chainsaw (after all, I found somewhere, the bastard, such air filter and starter covers). Yuri again expands the product line.

But the market did not appreciate such innovation. Apparently, buyers were slightly less idiots than anticipated. Without any expertise, it is clear to customers that the Husqvarna 372XP-d is far from the same as the Husqvarna 372XP. At the beginning of 2012, Yuri from Vykhino removed this chainsaw from the assortment.

Read more:  Stihl 180 No Oil Supply To The Chain

However, I am doing easier. I check if this is bullshit "not a real Husqvarna chainsaw", and whether it is one of those three saws that were mentioned at the beginning. And just look at the characteristic details present in "ChainSaw 4500", "ChainSaw 5200" and "ChainSaw 6300".

Raise your hand to someone who is not able to calculate the number of traffic jams and see a protruding metal edge without conducting an examination?

In addition, the examination of falsity is powerless here. If you prove that the Husqvarna 372HP is a fake, they will stick another label. They have a VERY MUCH DIFFERENT LABELS which, without a twinge of conscience, STICK ON ONE AND THE SAME MODELS. I can easily name the heels of the most popular Husqvarna stickers and the same number of Stihl stickers.