Rolling of frame saws is made with the aim of eliminating the marriage resulting from sawing, and improving the quality of cut.

Saws roll on milling machines, passing them along the length between two rotating rolls. The middle part of the saw blade is subjected to rolling at a distance of 20-25 mm from the line of depressions and the trailing edge. First, the middle is rolled, then from it gradually go to the edges. As a result of this treatment, the middle part of the saw lengthens somewhat, creating the initial tension in the cutting and trailing edges, necessary to increase the stability of the blade. An indicator of the saw blade blade rolling is its transverse warping when the saw is bent; this warping is detected if a straight pattern is applied across the saw blade.

Edit used frame saws in order to remove local defects: bulges, slack, distortions obtained by the saw during operation from heating, cutting forces, lateral bends, etc. Defects of the saw are detected with the help of a straightening plate and a straight template ; defective places are corrected by forging them on a special anvil with straightening hammers.

The frame saws are installed in the saw frame strictly parallel to the directions of movement of the log and the saw frame with the angle of inclination of the saws required for the given conditions. The correctness of the angle of inclination is checked by a special device. an inclinometer, and parallelism. by a straightening line with a square. The fastening of the saws in the frame should be rigid and reliable.

Forging a circular saw is done to give initial tension to the peripheral ring of the disk, necessary to ensure stability of the cutting edge of the saw during sawing. The initial weakening of the middle part of the disk is achieved by forging it with a straightening hammer on the anvil.

Editing a circular saw usually has the character of correcting mainly various “burns” obtained during sawing from friction of a rapidly rotating saw blade against wood.

The correctness of the circular saw is made with long and short rulers. A long ruler is applied across the entire diameter of the disc (through 20 °). Local curvature of the disk is investigated using a short ruler by sequentially turning it not only in the direction of the radii, but putting it at an angle to identify the exact boundaries of the depressions.

Sharpening of teeth of saws should provide:

1) the invariance of the tooth profile after each sharpening;

2) a given degree of sharpness of the tooth;

3) the lack of inversion of socks, burrs and blue tops of the teeth;

4) the correct position of the cutting edge of the teeth relative to the middle plane of the saw blade;

The tooth bite is made the same on each side and by a certain amount depending on the sawing conditions and the design of the saw.

The teeth are bred manually or on machines.

The conditioning of the saw teeth is carried out using a manual conditioner or a mechanical apparatus.

Chapter 6 SAWS AND TRAINING THEM TO WORK.
›Joiner›. Sharpening and editing carpentry instruments for wood processing. Edit instruments produced with the help of donkeys.

Training to work whole round drank. Main operations training round drank to work are the trimming and notching of the teeth; editing; rolling (forging); sharpening teeth tooth divorce or flattening; setting drank to the machine.

Blade instrument should be pressed firmly against the grindstone; angle sharpening and the shape of the chamfer should not change during the point.
Training to work drank consists in alignment (jointing), wiring and the point of their teeth.

Training drank to work. At preparing tape drank to work The following operations are performed: marking and trimming the tape along the length; connection of the ends of the tape (6.5); editing and rolling saws; sharpening and tooth divorce (flattening and sharpening teeth); setting drank in. 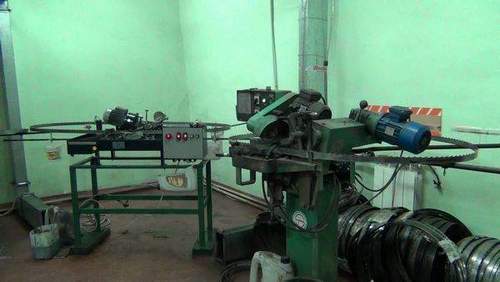