Any tool can break and the Stihl MS 180 chainsaw is no exception. Today we’ll try to understand issues such as: why the chainsaw stalls at an increase in speed, also at idle and at full speed. Let’s consider the options for diagnosing and troubleshooting related to this behavior of the Stihl 180 chainsaw.

Why the chainsaw stalls when you press the gas

Suppose a chainsaw normally idles, but with a sharp pressure on the gas stalls. What could be the reason? It is immediately clear that it is not a matter of ignition (lack of spark), because if the ignition was faulty and there was no spark, the tool would simply not start. So the fuel system remains.

The first thing to check is the fuel filter. 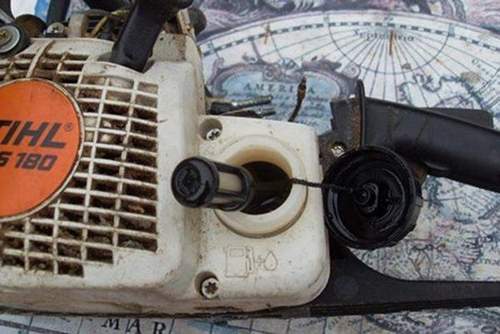 In some cases, a dirt-clogged filter is unable to pass through the fuel mixture in sufficient quantities. Accordingly, there is a fuel shortage in the system, which leads to the fact that when you press the gas chainsaw, the fuel burns out, and a new one does not have time to arrive, as a result of which the Stihl chainsaw stalls. Also, with a clogged fuel filter, a noticeable drop in the power of the chainsaw at maximum speeds may be observed, but this is with little pollution.

On the pages of the World Wide Web, you can find information that the Stihl 180 chainsaw may stall due to severe contamination of the air filter. I would like to refute this not entirely correct information, and to inform that the Stihl MC 180 carburetor is equipped with a compensator, which is designed and installed in order to take the air necessary for the normal operation of the Stihl 180 chainsaw, bypassing the contaminated air filter. Of course, power with a clogged air filter will drop a little, but it certainly will not stall. Also, power may drop due to piston wear, a Stihl MS 180 piston chainsaw repair will already be required.

Read more:  How to Cut Tiles If There Is No Tile Cutter

One of the reasons why the chainsaw does not develop speed when you press the gas, but instead stall, is a carburetor malfunction. Let’s say the Stihl 180 saw worked properly, and then it was put on for a long time and did not use it. After it was started, and at idle it works well, and when you press the gas it can stall. Why does it stall? The reason is a stuck carburetor valve nozzle. Of course, this is not 100%, but the probability of such a malfunction is high. We recommend reading the article about the device and repair of the Stihl 180 carburetor.

It is necessary to remove the fuel hose as carefully as possible, and prepare a plug for it in advance, since fuel should flow from it.

It is necessary to unwind the cover of the main carburetor chamber, this is the one on which the compensator is mounted on top. Then with a bolt of 8 mm and a length of at least 50 mm. We knock out the valve.

It is necessary to knock out the valve by installing the carburetor on a wooden stand, this will ensure its protection against damage to the body.

After the nozzle is removed, it can be purged using a compressor. The valve must allow air to flow in only one direction, if the valve can be blown freely in both directions, it means it is faulty and must be replaced with a new one. Assemble the chainsaw after the valve has been repaired, following the reverse disassembly sequence.

You can see clearly how the carburetor is being repaired, or rather how to knock the valve nozzle out of the carburetor body correctly by watching the video.

Another common reason why the saw may stall with increasing speed, air intake in the carburetor. This can only be checked with a special tool, but it is worth noting that if preventive work with the carburetor has not been carried out for a long time, then a new set of gaskets can be installed in the carburetor. In some cases, this helps to solve the problem with its depressurization.

When disassembling the carburetor to replace the gaskets, you need to carefully examine its needle valve, press the rocker arm and check its lifting. Sometimes, especially after the Stihl chainsaw has stood for a long time with fuel in the carburetor, the needle may burn to the carburetor body and not perform its functions. Simply put, the needle valve will not let the fuel mixture through. In this case, the saw will not work.

The first and most common cause of this malfunction is the incorrect carburetor adjustment. You can adjust the idle speed yourself, for this you need to have a Stihl adjustment screwdriver, which is supplied with the unit. The adjustment hole is located on the right side of the Stihl 180 saw on the handle and is indicated by “-” and “”.

If the Stihl chainsaw does not keep speed and stalls idling, you can be almost 90% sure that it has a violation in the fuel pump system, as a rule, it is the air leaking into the crankcase through the gasket of the sump, or, much more often, through the oil seals crankshaft. Air suction reduces or even completely stops the impulse, which is supplied through special channels to the fuel pump of the chainsaw. As a result of this, the Stihl 180 chainsaw does not receive the required amount of fuel and stalls at idle.

Diagnostics can be done using a special device called a vacuum gauge.

The second way to check the efficiency of the oil seals is to pour gasoline into the engine crankcase and look at them if the oil seals pass gasoline, which means they cannot provide normal pressure in the crankcase, which will make idling impossible. And when working at high speeds, with leaky seals, there is a possibility of jamming of the crankshaft bearings.

The algorithm for checking the crankcase and Stihl 180 oil seals for leaks is as follows:

Read more:  No Idling On Chainsaw

Having disassembled the Stihl MS 180 chainsaw, you can see the seals, after that it is necessary to fill the crankcase with gasoline and to check the leakage. It is possible to fill the crankcase through the fuel window in the cylinder; for this, the piston must be raised as high as possible. If leaks are found, defective oil seals must be replaced, or the pan re-sealed. Stihl 180 can be assembled following the reverse sequence of the algorithm.

Why stalls at full speed

You can often hear the question of why the chainsaw stalls at full speed. There may be several reasons. First, you need to consider how exactly the saw stalled. Let’s say the tool worked fine and suddenly, for no apparent reason, it suddenly died out and the starter does not crank. In such a situation, you can be 100% sure that the chainsaw is stuck and you need to proceed with its overhaul.

The second situation is when the Stihl 180 chainsaw worked fine, then gradually in a short time it lost power and died out, while overheating of the cylinder is observed. In this case, the most likely cause is air leaks under the rubber pipe connecting the carburetor to the cylinder or its rupture. The mixture was leaner, resulting in overheating. You can eliminate the cause by changing the nozzle.

If the Stihl MC 180 chainsaw stalls at idle, does not gain power when you press the gas or stalls at full speed, it is necessary to diagnose the fuel system and check the crankcase for leaks. You can do it yourself, but you need to have certain skills. If you are not familiar with push-pull saws, it is better to turn to specialists, because this technique is rather capricious and any mistakes are expensive.