Interest in a good tool has always been, both from buyers and from manufacturers of fake products. Chainsaws for a long time remained not interesting for the production of fakes due to the complexity of manufacture, but demand “gave birth” to clandestine production.

In our market you can find a lot of both copies and counterfeits for original Stihl saws. In the article we will analyze all the features and subtleties, how not to run into a fake and whether there are differences in quality.

It is difficult to distinguish the packaging, since the level of printing is high. Fake saws are packaged in exact copies of the original boxes. You can distinguish by the glued information plate. If you have a few drinks before, compare these plates and the numbers on them. At a minimum, they should be different. Each number is unique. 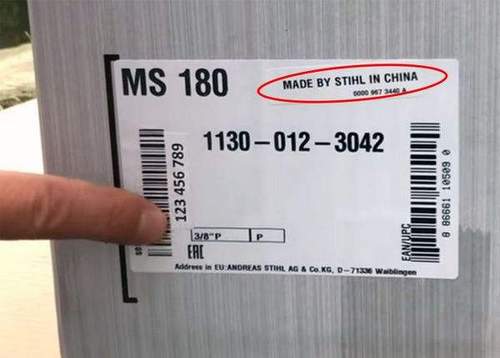 Please note that there is a unique serial number on the box. All saws are made in factories in China.

There is one visual difference between the fake Stihl saw box and the original one. there is no pronounced white strip around the logo and the entire length of the box on the fake.

In the original kit, never put a canister. If you find a plastic canister. fake.

Chain packaging is similar, differences in labeling on the chain itself. There is a company logo on the original product. He is absent on a fake.

The original protective case also has the Stihl logo. There is no logo on the fake, and the shape of the cover is different.

The original tire has no holes on the driven star. Fake give out explicit holes for lubricating the sprocket.

Video: Stihl Ms How To Distinguish A Fake

To the original Stihl saw, from the tool, there is only a screwdriver and a "candle" key, on which there is also an engraving company. The fake is equipped with an expanded set of tools and put it in a special case.

The original saw is twisted with asterisk screws. Fakes in 90% or a flat, or a Phillips screwdriver.

There is a logo on the tank lid. There is no logo on a fake. Also consider the logo on the screws on the back of the tank.

From the side of the muffler / tire, the original must necessarily have an identification plate with a serial number, which must coincide with the number on the box. On a fake plate or not or it is of poor quality and it can be seen that over time the inscription will be erased.

The part number is engraved on the muffler body on the original saw.

Differences in filter elements. Remove the filter cover and compare with the photo: Every Stihl Ms original saw has an article on it, every detail is perfect. On the fakes visible residues from the molds, blemishes in the plastic casting, there are no articles on the details.

Video review of the distinctive features of the original Stihl ms saw:

In the following video, in addition to the differences of the original saw, they show the distinctive features of the chain and tire:

In conclusion, check out how to distinguish Stihl original chains and saw oil.

Saws require timely maintenance. It is advisable to use the original oil and original chains.

Read more:  How to Cut Fillets to the Ceiling

Video review of new Stihl ms saw oil canisters and how to distinguish an original from a fake with examples:

The original chain is more difficult to distinguish from the fake, use the official manufacturer information:

And a small video comparing the original chains with fake ones:

Why buy an original saw if a fake is almost no different? The original saw will last for many years, original spare parts are suitable, there is support and manufacturer’s warranty. But most importantly, all original saws are tested and meet all safety rules.

Due to the huge influx of fakes, it is better to buy Stihl saws from official representatives of the company, the list of sellers can be found on the company’s website. a list of dealers.