How to unscrew the disc (nut) on an angle grinder, if bitten, jammed, does not unscrew

I will say, perhaps, a well-known truth. It bites nuts more often on angle grinders with a disc size of a significant size, say, 150-180 mm or more. The thing is that the resulting torque, in the case of a disk impact at the time of the start of cutting, is much greater than for a disk, say 125 mm. As a result, by inertia, the nut tightens so tightly that it is very difficult to break it in the usual and usual ways. Now about the special methods.

How to unscrew the disc (nut) on an angle grinder, if bitten, jammed, does not unscrew

An angle grinder, or as it is called more popularly and in a popular way, an angle grinder, nowadays an irreplaceable and very useful tool. Without it, neither here nor there! And if it suddenly fails, then you have to dodge in every possible way, look for alternatives and think about restoring the instrument. At the same time, it is impossible to use an angle grinder for its intended purpose because of a kind of simple lining when the disc does not unscrew. Rather, the nut that holds this disc is not unscrewed. Here you can break the wood, namely, bend or break the key, damage the lock button, break the case, but still not unscrew the very unfortunate nut. So, we will immediately warn you, if it is not too late. If you suddenly do not unscrew the nut holding the disc with a key, then you need to change tactics. And it is precisely the cardinal method of unscrewing that our article will be devoted.

So, if there is no way with the key, even if you insert it and hit it lightly with a hammer, then we begin to use something more serious.

The first thing you can try, but again without fanaticism, is to take a rod, insert it into the holes on the nut and, using a hammer, move the nut in the direction of its untwisting. The main thing here is not to break the button and not to rip the holes, as here 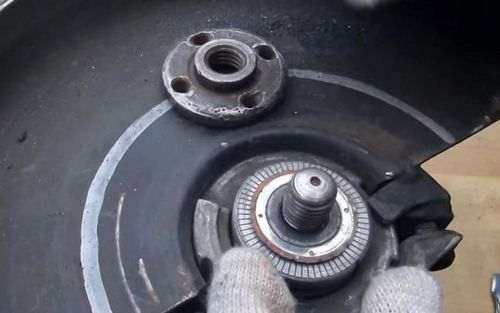 The second thing that many advise is to warm the nut. We warm up the nut. As a result, it is a little, but physically still has to expand. Resizing may or may not help

The third method is the most effective, and oddly enough, one of the safest for the angle grinder itself.
We take and break off the edges of the disc along the nut.

Next, we use a thin metal plate or another disc (thinner), and maybe a second angle grinder with a disc. In this case, the broken disc must be turned either with a plate or a disc. We try to sharpen the disc so as not to damage the nuts holding this disc, because they will still be useful to us. So we sharpen the whole broken circle until we grind it off and the nut is unscrewed.

Read more:  How to cut tiles with an angle grinder without dust

This business is 4-5 minutes, no more.

If you will be using a second disc or metal plate, it is best to insert them in a vise to hold them. Since it is dangerous to hold such objects with your hands. This is the most effective method!

This method is similar to the previous one, only you can use a suitable metal rod or chisel. After fixing the spindle head, tap on the edges of the clamping holes in the direction of the wheel movement. By slightly sliding the lock from a dead center, you can unscrew it by hand. However, the method is not the most harmless for the tool; the bore holes for a standard key are damaged.

Replacing the disc with opposite rotation

This method has several advantages; it can be carried out without a key and with a broken spindle lock. Angle grinder beginners mistakenly believe that if the stopper breaks, it is almost impossible to unscrew the nut. However, this is not the case. You don’t even need keys.

Taking care in advance about the safe operation of the angle grinder, you will save yourself the need to take measures to eliminate the abnormal situation. Such events include:

This is one way to remove a disc from an angle grinder without a key. The lock nut is heated with an industrial hair dryer or gas burner. This will make the flange much easier to unscrew. However, there is a risk of damage to plastic parts of the angle grinder or gearbox.

How to unscrew the nut jammed?

Removing a disc on an angle grinder, if bitten, is not so easy, especially without damaging the cutting element or tool. We will also consider several options for action.

The use of this tool is justified by an increase in the applied torque due to the increased shoulder. Using a gas wrench will make it much easier to unscrew a jammed connection. However, when eliminating biting, it is important to remember that excessive force can damage the spindle lock or jam nut.

How to avoid snacking?

To avoid trouble when changing the angle grinder attachment, it is advisable to prepare in advance for work. To do this, you can insert a small spacer between the disc and the nut. Suitable material is cardboard, a piece of linoleum or plastic.

If the fastener is constantly tightening too tightly, it is advisable to use a circle with a smaller diameter. It is also important to monitor the cleanliness of the tool, timely treat the thread with oil, WD-40.

What are the ways to unscrew a tightened nut on an angle grinder?

An angle grinder, or an angle grinder, is a versatile tool with which you can perform a wide range of actions. It has a simple mechanism of action based on the rotation of the shaft by an electric motor. Essential for cutting metal parts, polishing surfaces and sanding various materials. One of the common problems during operation of an angle grinder is biting the nut that holds the disc. This does not allow replacing the nozzle, and strong impact can damage its threads, break a key or break the body.

How to unscrew if it is delayed?

Remember! Unscrew in the direction of rotation of the disc. Those. If the disc rotates clockwise, then you need to unscrew the nut clockwise.

The easiest way to unscrew the disc mount is to place the wrench and then hit it several times with a moderate hammer.

If that doesn’t work, there are alternative methods for solving the problem:

If a situation arises when you are left without a key, you can cut down the stuck mount with a chisel or grind it off with a second angle grinder with a disc for working on metal. After that, you will have to restore the thread, as well as look for a spare nut. If the circle still does not lend itself, you can try to combine different methods. For example, treat the shaft with machine oil, and then start unscrewing the nozzle using a lever or knocking the mechanism with a hammer.

We take two boards made of thick plywood, chipboard or thicker wood and fasten them with self-tapping screws. For clarity, I drew a circle so as not to get it into the disk. The boards hold the disc so well that it will not be difficult to unscrew the nut using a standard wrench, hammer or gas wrench without damaging anything.

The method is suitable for a circular saw. It does not have a stopper, like an angle grinder, so it is difficult to tighten the screw strongly. The clamping screw tends to loosen during operation, which leads to a stop of the saw blade and severe wear of the seat. After a while, the wear reaches its limit and because of this, you have to buy a new circular. Obviously, this is due to the heating of the disk during operation. Solved the problem of loosening the screw by installing a heat-resistant paronite gasket on the saw blade and tightening the screw, locking the blade with planks.

Read more:  The Bosch Hob Does Not Turn On

Next is another method that will help unscrew the nut of an angle grinder.
: “Victor Do It Yourself”.

Yerlan Selchanin.
Many craftsmen will not escape such a situation when tightening a nut on an angle grinder. The master very often heard stories that it is very difficult to unscrew it. Worked the angle grinder for 3 years, never tightened it. But I tried to change the disk, nothing came of it, since this nut was tightened tightly. I looked at youtube, how others are doing, asked my friends, used the method that this was filmed about.

Nowadays, almost everyone who loves and knows how to tinker has such a tool at home as an angle grinder. The correct name for this tool is angle grinder (angle grinder). The angle grinder is called it because the first mechanisms of this type were brought to the Soviet Union from Bulgaria.

What to do if the nut is stuck?

A common problem when using an angle grinder is a jammed nut. The first thing to do in such a situation is to determine the direction of rotation of the disc. It is recommended to unscrew the jammed nut in the same direction. There are several most effective ways to solve this problem.

And check again by disconnecting the angle grinder from the mains and disassembling the structure on the spindle. It should be something like this:
washer (with splines fixed on the axis and a projection for the disc diameter),
the disc itself (which rests on the washer and is centered by the protrusion),
nut (which presses the disc with the flat part).
Collect all this without effort and try to turn the disc by hand in the direction opposite to its rotation (i.E., simulating its behavior in real rotation), the nut should tighten when rubbing against the disc. If this is so incomprehensible, what and at what moment is unscrewed.

PS And the profile under the gypsum board is more humane and faster to cut with scissors!