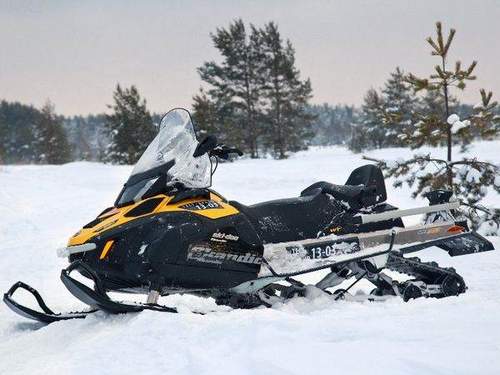 Hello. Let’s look at choosing a Scandic vs Yamaha Viking PDU snowmobile. What to take? How to choose the right snowmobile with a 50 cm track: BRP Ski-Doo Skandic WT 550 or Yamaha Viking 540? What are the pros and cons of these top utility models. I often met with discussions on the forums, which is better, what to look for? But for some reason, I have never met an article in which there will not be 500 pages of the forum, in which I can simply read a short story, build for myself in my head some basis on these two models. Understand all the pros and cons, the important difference for yourself, compare features, and it’s already easy for you to make a choice. If you are also interested, then let’s continue!

To begin, let’s look at each model separately, and at the end we’ll summarize the comparison of the pros and cons.

Model BRP Ski-Doo Skandic WT 550 can be compared with a reliable SUV, ready to conquer any peaks. The snowmobile is stable and safe and is perfect for outdoor activities or hunting. The device is not afraid of either hard work or harsh operating conditions and will be an excellent partner in any situation.

All? Thought the "pluses" ended? But no, it’s impossible not to note the real merits of Yamaha 540 snowmobile. Before the crisis and price increase, it was one of the most popular snowmobiles, after the domestic Buran and Taiga. What did this snowmobile sunk into the souls of those who bought it? First of all, the price, which amounted to 300t.r., when the price of domestic snowmobiles ranged from 150t.r., to 200t.r. But the main buyer of the snowmobile was either a hunter or a fisherman. Therefore, the design requirements were minimal. The people got a nickname for Viking. “Iron”, for some reason, like Buran. The reliability of Yamaha’s two-stroke snowmobile VK540 3 and 4 was at its best, but there were also many questions of quality: the pistons burned out, drive shafts burst in the track (some kind of illness), etc.

They used to take a snowmobile because of the price, but now Yamaha is ruining her advantage. Yes, there are changes in the technical characteristics after decades, let’s consider them.

The engine here is 2-stroke with 535 cubes and 46 hp. Motor. not bad, high-torque, unpretentious, air cooling. But there have been cases that Taiga is a 2-carburetor with 55 hp. laden with a sleigh rode on fresh puff, and VK540 did not have enough power and had to go after Taiga 550.

The 50th caterpillar with a 38 mm lug. finally, Yamaha increased the lug on his snowmobile, because until 2012, it was 25 mm, and then became 32 mm with the advent of VK540 IV. Therefore, the patency of the Viking 540 3 and 4 snowmobile suffered, compared with the Skandik 550, which had a track with a height of 38 mm for a long time.

New, comfortable, high seat at VK 540-5. a direct soft bench! Even Taiga makes seats slightly different in height. Not to mention ATVs and snowmobiles, 90% of all utilitarian models. Because, the driver’s emphasis on the fifth point is not only convenient, but also safe on rough terrain. Previously, there was a proper seat with a step. Apparently decided to save.

Well, the seat was made on a Viking 540-5 snowmobile, but what did the steering wheel not be raised? From personal experience, moving through fields and forests. you regularly have to cross roads. And the snowier the Winter, the higher the parapets across the road. What do we do when we move? We get on the steps and maneuvering with the body, we cross the road. We’re definitely not moving while we are sitting. What am I talking about. Yes! On Scandic, you are completely straight and hold the wheel with my height 175cm. And on Viking you’ll have to overcome any obstacles in the form of a question mark in the form of a question mark, where you need to drive while standing. And at the end of the day, even a 25-year-old guy will feel like an old man, with creaks in his lower back and back. These are personal memories.

In general, Viking itself is not a bad snowmobile. A simple service staff junk that lives quietly in our area. Very maintainable. But unfortunately, its dry weight of 290kg and the power of 46 forces also play a significant role in opposing it.