A little research needs to be done. Device acceleration is initiated. The serviceability of the engine should be assessed during the maximum revolutions. When the engine is functioning correctly, then when you press the accelerator, the speed rises quickly to 15,000 rpm.

If this does not happen or the increase in speed is too slow, it is necessary to use the screw marked with the letter L. It turns counterclockwise. Moderate movements must be observed, since the turn cannot be more than 1/8 of a full circle.

In order for the chainsaw to work properly, you need to carefully perform work on adjusting the carburetor in exact coordination of their sequence. If there are any irregularities in the functioning of the device, it is necessary to completely disassemble it yourself. In most cases, it is necessary to replace any parts that have become unusable.

With constant checking of the quality of carburetor settings and taking timely actions to improve its operation, problems with the chainsaw do not arise.

About which chainsaw to choose. Read here.

The use of gasoline dust is widely used Not only in the professional forestry industry, but also in the household.

Indeed, the mobility and versatility of the tool allows a wide range of work to be carried out at a minimum cost.

A feature of gasoline dust engines is the required frequency of carburetor regulation.

The engine resource, and therefore the tool as a whole, depends on how correctly such a setting is performed.

The principle of operation of the carburetor is as follows:

Air enters the supply pipe at a certain speed, which is regulated by a damper.

When the tube is opened, the float chamber is activated.

The air flow is accelerated by the diffuser and mixed with the fuel coming from the float chamber.

The sprayer sends the prepared mixture into the inlet channel, through which it enters the cylinder.

Fuel suction is achieved by the pressure difference in the float chamber and the delivery pipe.

In this case, the engine speed is directly proportional to the amount of incoming fuel.

The engine starts at medium speed and warms up for about 10 minutes. The screw responsible for adjusting the idle speed must move clockwise. It is released only when the engine comes into stable operation. It is necessary to check that the chain does NOT move during this process.

When adjustment is needed

As already mentioned, the new chainsaw already has standard fuel settings. But for proper break-in, it is recommended to limit the maximum engine speed, and this is done using the adjusting screws located on the carburetor body. Also, after running in, you will need to make a more accurate adjustment of the fuel mixture supply again.

In addition, you will have to adjust the carburetor in the following cases:

The design and principle of operation of the chainsaw carburetor

The chainsaw carburetor also consists of the following main components:

Below is a diagram of a Walbro carburetor, which is very often equipped with chainsaws. Using this scheme, you can study in more detail the internal structure of the chainsaw carburetor.

The carburetor can have 2 or 3 adjusting screws with springs. The adjusting screws are designed so that there are needles (cones) at their ends. The screws have a right-hand thread, that is, they turn clockwise.

The work of the chainsaw carburetor is as follows.

Setting up and troubleshooting a chainsaw carburetor

The functioning of the internal combustion engine (ICE) of the chainsaw is BASED on the combustion of the fuel-air-oil mixture. To mix the gasoline-oil mixture with air, and then feed it in portions into the combustion chamber, a rather complex device is installed on the engines. Carburetor. When buying a new chainsaw, the carburetor already has factory settings, but over time they get lost, and the device that controls the fuel supply needs to be adjusted again. NOT knowing how the carburetor works, and I do not understand the principle of operation of this module, it will be problematic to correctly configure it.

Read more:  How To Change The Starter On A Stihl Chainsaw

You should be aware that the carburetor can only be adjusted correctly if: 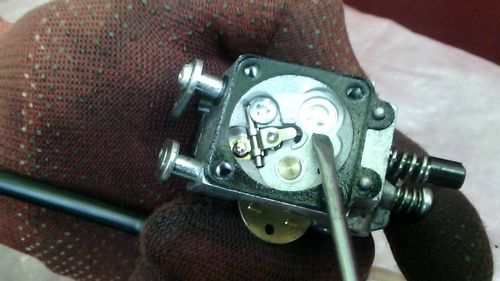 To adjust the carburetor of imported chainsaws, you must adhere to the following rules.

By screw “H” underestimated or overestimated revolutions are compensated for due to the change of the type of fuel, changes in oil concentration or humidity.

Screw “H, not having enough experience it is best NOT to regulate. If the tuning of the carburetor of the chainsaw is carried out by an incompetent person, there is a great danger that a too lean mixture will enter the combustion chamber at high speeds, especially under load. Such engine operation will inevitably lead to rapid wear of its piston system and to a failure in the ignition system.

It is possible to start adjusting high revs if the person who will perform the tuning has the knowledge and skills to adjust carburetor engines. The master-tuner must have a special device at his disposal. Tachometer or multimeter with oscilloscope function.

Setting up the carburetor of a chainsaw, namely, high engine speed, follows a simple scheme.

Read more:  Why The Chainsaw Stalls When It Heats Up

The carburetor of a Chinese chainsaw should be adjusted in the same way as described above. There are holes on its body, into which, in order to adjust the engine speed, you need to insert a flat screwdriver. Each hole is labeled with one of the three letters. As a rule, you can see the letter near the top hole “T”, and near the bottom (shown by arrows). Letters “L” and “H”.

How to troubleshoot a carburetor

The main malfunctions of the chainsaw carburetor may be as follows.

In general, timely adjustment, as well as timely repair of the chainsaw carburetor, can significantly extend the life of the entire piston system of the engine. Therefore, the tuning of this component of the fuel system must be treated with great care.