I want to say right away that a chainsaw should only be in the same hands of one owner. If you lend the saw for use to your neighbor Vasya or a friend Petya, it is better to give them right away, since it is not a fact that they will return it to you in working condition, and you have a long time and money to restore it.

An untrained person is afraid of working with a chainsaw, but in fact it is convenient, easy and simple to handle, the main thing is to observe the precautions described in the instructions.

If on the counter in addition to different brands are the chainsaws Stihl (Stihl) and Husqvarna (Husqvarna), then I advise you to choose Husqvarna, if there is no Husqvarna, then take Stihl. 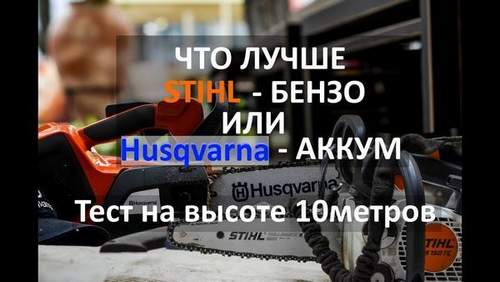 What are the differences, advantages and disadvantages of Stihl and Husqvarna chainsaws? Since I worked with these two brands of chainsaws, now I will describe their difference.

1. Husqvarna chainsaw is lighter than Stihl, which makes the job much easier.

2. Husqvarna has a gasoline suction button, unlike Calm. This is very convenient, since when the gas in the tank ran out as a result of which the saw died out, then when the gas is refilled again using this button on the side, the saw starts again immediately. Press this button no more than six times, otherwise you will fill the candle. For Shtil, this is a difficulty, after pouring gasoline into an empty tank, you first have to shake the trigger with a trigger, then turn the saw in different directions, shake again so that the gas reaches the carburetor. I do not know why manufacturers did not provide this necessary function, maybe in new models there will be. Again, do not get carried away too much, otherwise fill the candle.

3. But on Shtil, the top cover is easily removed quickly, you just need to turn the latch and the cover is removed, unlike Husqvarna where you need to unscrew the screws. This is just one drawback with Husqvarna, because it is not convenient in the case when, for example, you have a candle flooded and you need to quickly remove the cover. But with proper operation, you will not fill the candle. There are times when you remove the cover several times, due to the fact that the chainsaw stalls for various reasons, which I will describe below, so if you took Huskvarna, do not tighten all the screws during operation, tighten one and stop.

4. Huskvarna has a hole on the side, a bolt, let’s say, that regulates the idle speed of the saw. I didn’t find the idle speed regulator in Shtil, maybe I was looking badly :), or maybe just not. In general, I read the instructions for a long time, I don’t remember something.

Read more:  How To Change The Line In The Trimmer And Which One Is Better To Choose?

Actually, in principle, these are all the differences in operation, as you see they are not very significant. As I already said, the saws are both good, which advice I gave above, although decide for yourself, the main thing is to carefully read the instructions.

What to do if a candle is flooded?

1. As I wrote above, do not suck in a lot of gas, then the candle will not be poured and the trigger must not be touched when the saw is off.

2. Place the saw on the ground. Then remove the top cover, turn out the candle, wipe it well, dry it. Next, you need to dry the cylinder, for this, turn on the toggle switch lever on the saw, take a lighter, preferably gasoline in your right hand, set fire and direct the flame inward to where the candle stood, then gently pull the starter with your left hand, it should puff. Do not touch the trigger. You need to do this operation several times. When done, put back the dry candle, close the lid, the saw should start.

Now I would like to talk about chain lubrication. Most people do not care about the operation of the saw, which takes the used oil and poured into the tank. So I want to say that it is absolutely impossible to do this, you will quickly kill the saw.

Video: What is Better Stihl Or Husqvarna

What happens to the saw if the chain is lubricated from used oil?

Firstly, it must be said that used oil is drained from engines because it has lost its adhesive properties. If the oil has lost its adhesive properties, then why reuse it? Many say, like what is it that this is just a chain that lubricates. Such frivolity leads to a breakdown of the chainsaw. After you fill in the working, the saw will work for a while, then you again fill in the working, the saw works, but at one moment you will feel how the saw began to pull poorly, you press harder on the trigger, but there is no power, this is due to the fact that the oil supply channel from the tank to the chain is stuck (working out the same) and the oil stops flowing, the chain stops sliding on the blade since the chain sticks to the blade too (working out), as a result of which all the saw’s power is used to unwind the chain, saw begins to howl strongly. If even after that you did not stop and continued to saw with a howl, then the chain forms a scuff in the place where the chain is inserted into the groove of the blade, as a result of which the chain simply simply throws it out of full. This can be dangerous, since it is not known which way the chain will throw, either up your arms, or down your legs, or where else. Yes, by the way, a chain catcher is provided on the chainsaw, but it’s not a fact that it will save you, although it saved me (because of the bad people who filled the mine), but from time to time it doesn’t have to.

By the way, pouring mining is another reason why the saw may not start. So it’s better not to pour the working off, but to use special oil for the chain, and you don’t have to disassemble the saw in order to clean the oil supply channel to the chain.

Next, I would like to give you advice on how to breed engine oil with gasoline. Actually, the instructions should say how to breed and I recommend that you do as it is written there, but I personally bred by eye, although this is not recommended, but I didn’t smoke. When a chainsaw smokes, it means you have mixed a lot of oil with gasoline. In this case, you need to drain gasoline from the tank and re-dilute, otherwise you will soon need to replace the piston rings. The oil should not be dark red, but light red, closer to pink.

After buying a chainsaw you need to adjust the idle speed, this is another reason why the chainsaw may stall or not start at all.

Most people complain that the saw does not start, I described some reasons above, in general there are a lot of reasons why the saw does not want to start, for example, the contacts on the ignition wire are dirty, or because of soot on the exhaust, in these cases you just need to clean. If the carbon deposit is not cleaned, then the exhaust will have nowhere to go and it will accumulate in the cylinder, in which case you will never start a saw. To do this, first of all, thoroughly clean the carbon deposit, then remove the top cover, turn out the candle, by the way, you can immediately check the spark on the candle at the same time, after the candle is turned out, turn on the toggle switch lever and pull the starter several times, the smoke should come out of the cylinder, then tighten the candle again, the saw should start. Also, the saw may not start due to the fact that it is corny heated, in which case it must be allowed to cool.

Read more:  How to cut corners on a skirting board manually

How to start a chainsaw in the cold?

If this is Stihl, we start according to the same principle, only here is not the tongue, but the lever of the toggle switch, it just needs to be lowered down, pulled by the starter, after the saw snorts, the lever is switched up to ON, we jerk the starter again, the saw should start.

Why the saw stalls / does not start or the basic rules for the chainsaw to serve you for a long time.

2. The exhaust accumulates in the cylinder. Clean the exhaust

3. Warm up corny, let cool, do not bother the saw

4. Do not prime the grease to lubricate the chain.

5. When mixing engine oil with gasoline, make sure that there is not much oil, do as it is written in the instructions.

7. Do not saw on a blunt chain

8. Do not climb into the carburetor yourself

9. When sawing thick trees, do not push the trigger fully

10. Clean the air filter in time

11. Check the operation of the candle

I hope my article was useful to you. Good luck in your work!