The serviceability and effectiveness of household and professional chainsaws largely depend on the degree of wear of their main operating mechanisms. Several factors speak about damage to the working components of a gasoline tool, the main one of which is the speed of the working engine. Their arbitrary increase or decrease can tell the operator about a carburetor breakdown, a misalignment of the clutch and other malfunctions. this will allow to identify any of the breakdowns in time and eliminate it on their own.

Why the chainsaw is not gaining momentum?

In cases in which the used gasoline saw is not able to steadily gain momentum and spontaneously stalls when you press the accelerator, you will need to carefully check the engine crankcase and carburetor. First of all, the operator must carefully inspect the nodes and make sure that they are not sealed. If a large amount of oil was found inside the crankcase or carburetor, then you need to eliminate the leak inside the faulty unit.

The next reason, due to which the chainsaw does not develop revolutions, is a factory defect or mechanical damage to the breather located inside the fuel tank. A vacuum may form in the fuel tank, which leads to a lack of fuel supply to the working cylinder of the power unit. Another cause of this problem may be deposits accumulated on the surface of the fuel cylinder. In this case, you need to remove the filter element and rinse it in clean gasoline. If after this the chainsaw continues to stall under load, then you need to perform the following procedure: turn off the power unit of the chainsaw, remove the fuel tank cap and tighten it again. If after this the motor of the gasoline tool starts to gain momentum and after 5 minutes of operation stalls again, then the cause of the breakdown is a faulty breather. 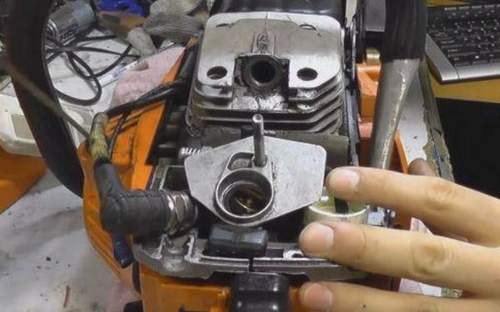 Another common reason for the lack of revolutions of the saw motor can be a thick layer of soot on the walls of the factory muffler. Resinous deposits and ash will impede the release of exhaust gases, which will lead to their return to the engine compartment. As a result, the engine will start to make extraneous sounds and lose a lot of speed even with a slight pressure on the accelerator.

Chainsaw does not take off – How to find and fix a breakdown?

The most common cause of this frequent breakdown is an incorrectly configured damper. It is necessary for the intake of air, which is required by the carburetor to enrich the fuel mixture with air. To adjust the damper, you need to adjust the carburetor. In this case, special attention should be paid to the operation of the power unit at idle. You can check the engine in idle mode, paying attention to the condition of the circuit immediately after starting the engine. If it rotates, then you need to configure the power unit.

Another cause of this typical malfunction is air leaks. If an air leak occurs in one of the chainsaw mechanisms, the mixture will automatically deplete, which will lead to a spontaneous increase in the engine speed of the chainsaw. In this case, the operator will need to carefully check the entire fuel system, including the carburetor, pipes, working chambers of the unit.

In some cases, the chainsaw does not slow down due to the clamped cable of the accelerator. In this case, the power unit will independently gain momentum to a maximum immediately after its launch. Disassembly of the gas handle and inspection of the entire gas supply mechanism will help to solve the problem. The clamped cable will need to be adjusted or completely replaced.

Video: What To Do If A Chainsaw Gains Turnover

What to do, if the chainsaw itself is gaining momentum?

This malfunction is typical for novice gardeners who ignore the need for timely maintenance of their gas tool. In the case of an arbitrary set of turns by a chainsaw, the cause must be sought in the carburetor. First of all, it will need to be completely disassembled. After making sure that all the built-in parts are working, you can start flushing the fuel assembly. To do this, you need:

Read more:  Why does the chain saw lead to the side

In some cases, the cause of an arbitrary set of turns by a chainsaw may be the loss of sealing of the crankshaft seal. Due to constant contact with the moving shaft, the stuffing box lends itself to increased heat, which leads to the formation of cracks and holes inside it. A damaged gasket cannot be repaired, so it must be replaced.

Often the cause of air leakage, due to which an arbitrary set of revolutions by the motor occurs, is the loss of fixation of bolted joints. In this case, the operator will need to tighten all the bolts and check the operation of the gas tool again.

Chainsaw does not hold idle – search for causes and repair

There may be several reasons for this common failure. Basically, the loss of speed when the engine is idling is associated with engine malfunctions, loss of compression in its full-time cylinder, ignition system, carburetor, and improperly prepared fuel mixture. In search of the exact cause of the breakdown, the operator may encounter such problems:

Read more:  What file is needed to sharpen a chainsaw chain

The stable operation of the chainsaw engine is largely dependent on the quality and proportion in which the fuel mixture is prepared. An excess or lack of oil will lead to a gradual deterioration in the operation of the power unit and over time it will not be able to work even at idle. In order to prevent this, you must strictly adhere to the ratio of gasoline and oil, which is indicated in the instructions for the chainsaw used.