The advent of compact batteries was accompanied by the mass production of mobile handheld power tools. A screwdriver that does not depend on stationary sources of electricity has opened up the possibility of performing complex installation work where it is rather difficult to stretch a power cable. The battery for the screwdriver plays an important role in this.

This is a plastic case in which mini batteries are enclosed, tied together with a contact tape. The ends of the tape are brought out in the form of elongated contact plates. The screwdriver itself has a hole into which the protrusion of the battery case with side terminals enters.

Different manufacturers of hand-held power tools make the battery case detachable or non-separable. With some experience, you can disassemble the permanent connections without harming the battery. Collapsible housings are opened with a screwdriver, with which the fastening screws are unscrewed.

A row of cylindrical rechargeable batteries is placed inside the unit. It can be 8, 10 or 15 batteries. They are usually lined up in 2 tiers. The top row contains 2 or 3 elements.

Batteries for all screwdrivers are tied with nickel metal tape in sequential order (minus to plus). The tape is spot welded to the cans.

The body is usually filled with 18650 lithium batteries. Testing takes place as follows:

Additional Information. Not everyone has spot welding at their side. In this case, ordinary soldering is used. It should be noted, however, that the solder does not hold the nickel strip firmly against the can terminals. It is better to find a workshop with spot welding equipment.

Read more:  Conversion Of A Screwdriver To Lithium 18 Volts

Li-Ion batteries significantly outperform other types of batteries. The advantages of lithium-ion batteries include the following:

It is difficult to say unequivocally which battery is better. Mainly, you must decide for what purpose you are going to purchase a screwdriver. If for home use, which implies infrequent switching on with long interruptions in work, then you need to choose a tool with a nickel-cadmium battery.

Lithium-ion batteries are the professional choice. They are designed for continuous, long-term and uninterrupted operation. The recharge time of the battery is also important for a professional tool. But it is worth remembering one rule: a lithium battery cannot be brought to full discharge.

Replacing NiCd cells with Li-Ion is also not difficult. It is known from the school course that if the batteries are connected in series, then their voltage ratings will be summed up. For example, your screwdriver runs on a battery with a voltage of 14.4 V, which means that it can be replaced with four 3.3 V finger batteries. This voltage will be enough, because the lithium batteries do not “sag too much” when starting the device. 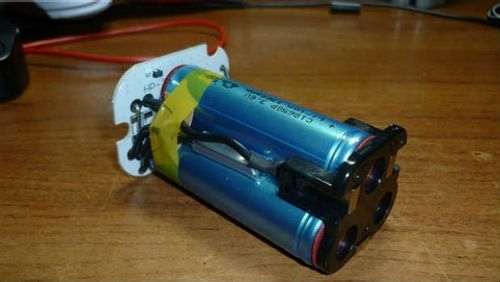 It is recommended to buy batteries from well-known manufacturers, for example, Sistem A123. The LiFePO4 battery of this company has a capacity of 2400 mAh, sufficient for the normal functioning of the screwdriver. If you buy batteries via the Internet, they will cost you less, around 900 rubles for 3 pieces.

You will also need to purchase soldering acid instead of alcohol flux. In this case, overheating of the batteries will be minimized. The soldering iron must have a power within 65 watts.

You can learn more about how batteries are replaced with lithium batteries by looking at this.

How can you replace the "native" battery in a screwdriver

If the batteries in your screwdriver have worn out, they can be easily replaced. There is such a thing as battery interchangeability. For example, under the PowerPlant brand, batteries are produced that are compatible with most popular brands of power tools. They cost much less than the "native" batteries and are quite efficient.

Read more:  Can a Screwdriver Drill a Concrete Wall

But if this option does not suit you, then the batteries themselves in the unit can be replaced with new ones. To do this, you will have to disassemble the battery pack and remove the elements that make up it.

Lithium-ion batteries and their benefits

It is lithium-based batteries that are now constantly heard by many consumers. Partly due to the fact that the lithium compound is used everywhere, in almost any gadget, from a smartphone to a personal laptop. They appeared not so long ago, if we compare the time of their occurrence with nickel-cadmium only in the 90s of the last century.

It is known that in the beginning, lithium-ion batteries had a high degree of explosion hazard due to technological flaws. At the moment, the vast majority of them are equipped controllers charge level and heating, which provides them safety and increased terms of productive use.

What is so remarkable about lithium batteries?

Let’s consider their advantages in comparison with their predecessors:

The high level of capacity ensures the successful use of this particular type of battery in professional technical tools.

For all its benefits, lithium batteries very sensitive to the slightest voltage fluctuations during charging, and to sudden temperature changes. Of course, all chemical current sources are susceptible to this sensitivity to one degree or another. But it is no coincidence that experts in the field of electronics call this type of batteries capricious.

Unlike nickel-cadmium batteries, it makes no sense to purchase lithium batteries with a margin. They lose their capacity over time if left unused for a long time., and their shelf life is no more than two years.

Ni-Cd is the first alkaline battery, the production technique of which was developed at the end of the 19th century. However, due to the fact that for those times the mass production of batteries was very expensive and required certain conditions, it began intensively only in the 50s of the twentieth century.

Despite criticism from numerous fans of more modern batteries, capacity indicators nickel cadmium batteries have not bad. AND heat up during operation much less, than the same nickel metal hydrides, due to endothermic reactions occurring inside. If you recall the school chemistry course, endothermic reaction means nothing more than the absorption of the released heat inside the element, and not its release into the external environment. This is exactly what happens with Ni-MH batteries..

Read more:  How To Assemble A Punch Makita

If we compare the characteristics of batteries for screwdrivers, based on practicality and safety, cadmium batteries will turn out to be much better. It is for this reason that they are still the most popular for household power tools.

In short, all the advantages of nickel-cadmium batteries can be expressed as follows:

In order for Ni Cd batteries for a screwdriver to work out their entire intended service life, there are several effective recommendations for their operation.

Insofar as they are not afraid of deep discharge, work with a screwdriver until the battery pack is completely discharged. Then you can put the batteries to charge without fear that they will lose capacity: when charging, these batteries quickly replenish it. Store them also better discharged in this case, the so-called memory effect will be much less, and during storage they do not need any recharging.

The memory effect that nickel-cadmium screwdriver batteries have is really not too much of a disadvantage. In order for them not to remember the unnecessary charge level, they need to carry out two or three full charge-discharge cycles. Then all of their best performance will quickly recover.

What about Ni-MH batteries, except that they tend to get hot? These batteries are less harmful to the environment. Their memory effect is less pronounced than that of the Ni-Cd predecessors. But they will have to be charged more often, because these batteries have a high percentage of self-discharge. They are inferior in popularity to cadmium.

What is the best lithium or cadmium battery for a screwdriver?