Why does a chainsaw stall under load

In some cases, the chainsaw under load is unable to work normally and simply stalls. A common reason for this behavior is improper carburetor adjustment, or air leaks through the crankshaft oil seals or carburetor gasket. And also this behavior can occur due to leaks in the carburetor.

A saw that is unable to operate under load will also be unsteady at idling. They will swim. Diagnostics begin with a check for leaks in the crankcase and carburetor. If air leaks through the crankshaft oil seals, they must be replaced. If air leakage is detected in the carburetor, the cause can be eliminated by installing a repair kit of gaskets.

Only after the above actions have not yielded results and the engine crankcase with the carburetor is sealed, you can start adjusting the carburetor.

The reason for this algorithm is as follows, if the air leak from the crankcase is not eliminated, but the carburetor was simply adjusted to normal engine operation, then the fuel mixture will contain more fuel than is required with a sealed crankcase, which in turn will significantly increase its consumption. Also, most likely, carbon deposits will appear in the engine, which will also negatively affect the further operation of the chainsaw.

In some models of chainsaws, to ensure the operation of the fuel pump, special hoses are installed that transmit an air impulse from the engine crankcase to the carburetor fuel pump. If this hose is frayed, the saw will idle unevenly and will not operate at all under load.

, which shows how to replace a defective impulse hose with your own hands on a HUSQVARNA 142 chainsaw, can be seen below. In it step by step the process of disassembling the saw is filmed, the impulse hose is shown and the consequences of its malfunctioning HUSQVARNA 142 are discussed.

Algorithm for checking the crankcase for leaks

Why does a chainsaw stall when heated

The situation in which a chainsaw starts up cold, and in the process of heating it can stall, is familiar to many who deal with them. The main reasons for this behavior of the saw are as follows.

Read more:  How to adjust the carburetor on your Carver chain saw

If the chainsaw stalls under load, this may be due to the fuel system or a dirty air filter. Replacing the fuel with the correct gasoline / oil ratio or cleaning the air filter are all universal solutions. An improperly prepared mixture of low-quality gasoline and, for example, machine oil is the main reason for the malfunctioning of a chainsaw, including when it heats up and stalls.

What to do if the chainsaw stalls immediately after starting? First you need to check the presence of fuel in the gas tank. If its level is not enough, then you need to prepare the fuel mixture in strict accordance with the ratio of gasoline and oil prescribed in the operating instructions. Gasoline must have the highest possible octane number, and the required brand of oil, as a rule, is indicated in the data sheet of the chainsaw.

Next, we check the spark plug, as well as the contact of its tip with the high-voltage wire. The gap between them should be no more than 0.5 mm. If necessary, the candle is cleaned of carbon deposits and dried. It is recommended to occasionally change the candle to a completely new one. The reasons for the tool stalling when you press the gas lie in the fuel filter or carburetor jet. Cleaning the gas filter will not take much time and effort, but it is better to entrust the disassembly and cleaning of the carburetor to the specialists of the service center.

Cases are common when the chainsaw stalls at idle. First of all, you need to check the muffler, and, in case of contamination, clean it from exhaust tar deposits. Also on the carburetors of some models, etc., there are bolts with the inscriptions H and L, respectively, rough and fine tuning. By adjusting the bolt L during the operation of the chainsaw so that its speed increases (turn the bolt just half a turn), it is possible to eliminate this problem. Adjusting the carburetor requires an electronic tachometer and is a rather time consuming process. That is why, in such cases, it is better to turn to professionals.

It’s easy to make sure the air filter is dirty. You just need to remove it and start the chainsaw without it, if the saw works fine, then it’s in it and it just needs to be changed or washed, depending on its type. And do not be afraid that the chainsaw will work for a while without dust protection if there is no dust cloud around you, then everything is in order.

So, remove the air filter. To do this, you need to remove the cover from the rear upper part of the chainsaw, which is fastened either with screws, or simply with some kind of latch that you just need to turn or snap off.

If the saw operates normally when the filter is removed after starting up, then it is dirty.

The air filter is either felt or nylon. The first looks like cotton wool or synthetic winterizer, and the second looks like a fine mesh of nylon threads stretched over a plastic case. Felt needs to be changed to a new one, but nylon can be simply washed in soapy water, dried and put back in place.

If the option with an air filter did not suit you, then we try to change the fuel one. It is located in the gas tank and is attached to a hose through which fuel is taken from the tank.

This hose must be gently pryed with something and removed from the gas tank its edge, on which the filter is fixed. Here, the option with work without a filter, as in the case of an air filter, is better not to apply, since you cannot know for sure if there are any unnecessary impurities in the fuel.

Therefore, we simply change the fuel filter to a new one and try to work. If everything is fine, then congratulations you found the reason.

Low oil in the fuel mixture

Let’s look at the most unpleasant case first. Why? Because before manipulating the filters, it is better to make sure that your oil and gasoline are mixed in the correct ratio.

Here, however, it is worth noting that if your saw has already been started many times (for example, ten times), but it continues to start, and then stalls again when the speed increases, then everything is apparently in order with the fuel. Otherwise, she would have simply stopped starting altogether.

But still, I recommend immediately dispelling the slightest doubts about the quality of the fuel, as soon as your saw stalled during a set of revolutions for the first time. Because if the reason is in the fuel, then, as already mentioned above, you can get into an expensive repair. Otherwise, you can still do it. To dispel doubts is to drain the old fuel from the tank and fill in freshly prepared fuel, in which oil and gasoline are mixed in the correct proportion.

The correct ratio is best seen in the instructions for the saw. If you have lost it, then we look at the ratio on the oil package. It is usually 1:50 or 1:40. If the oil is used non-native (well, for example, for Stihl chainsaws, Stihl will also be a little native), then I recommend using a ratio of 1:40, even if the oil packaging says 1:50.

After preparing a new mixture, drain the previous mixture from the tank, in which we are unsure, and fill in the fresh one just prepared.

Now that you have done everything to dispel any doubts about the quality of the fuel, we move on to further actions.

As I wrote above, with a lack of oil on the piston and cylinder walls, scuffs can form, and they are almost always formed. If you are lucky and there are no seizures, then with the new fuel mixture prepared in the correct ratio, the chainsaw should start working normally.

If seizures have appeared, then the saw may start and stall several more times, after which it will stop starting altogether. In such a situation, I sympathize with you, because, most likely, now you will need to replace the piston group, which will be very expensive.

If the saw, as before, starts up and stalls at high speeds, then we manipulate the filters.

The reason that the chainsaw starts to stall when tilted is a lack of fuel mixture entering the system. The fuel pipe is located directly at the bottom of the gas tank, so tilting the tool causes the pipe to simply sit over the fuel mixture. Actually, therefore, when the tool is in operation, it can suddenly stall.

If the chainsaw does not start well and stalls at idle, then the first reason is a clogged muffler. The muffler should be dismantled and then wet cleaned. This is very important as dry cleaning can cause dust to enter the lungs and cause serious respiratory failure. 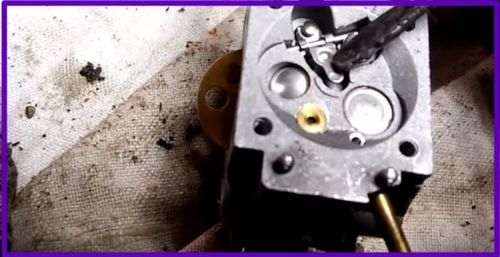 If the chainsaw starts to stall under load, then the reason for this is, first of all, an incorrect carburetor setting. If this reason is eliminated, then in addition to problems with the carburetor, the reason for the inoperability of the tool under load may be damage and wear of the crankshaft oil seals or carburetor gaskets, through which air is sucked into the system.

It is recommended to start troubleshooting by checking the seals and gaskets, and only after that check the correctness of the carburetor setting. Another reason why the chainsaw starts and immediately stalls under load may be the chafing of special hoses, through which impulse is transmitted from the crankcase to the fuel pump. But such hoses are not installed on all models of chainsaws, but only mainly on professional ones. It is recommended that this hose be replaced to rectify the problem. How to do it correctly is discussed in the video:

Why the chainsaw does not start well and stalls

With a poor start of the equipment to a cold, the problem may be the lack of compression, i.E. Rings are worn out due to a long service life, they need to be replaced. Sometimes the reason that the engine does not start well in an unheated state is a problem with the muffler, as well as poor contact between the plug and the wire.

Also, the reasons for a poor start can be wear or damage to the gasket, rubber cuff in the accelerator pump of the carburetor, which causes an additional flow of air, leading to an increase in saw speed.

The reasons why the chainsaw starts and stalls

A chainsaw has long been not a luxury, but a necessary tool for those who have a summer cottage or home ownership. But, like any other technique, this tool tends to fail, despite the simple device.

The classification of the main faults includes:

If the chainsaw does not start at all, the reason may be:

Why does the chainsaw start and stall, what to do in this case? The reasons for this need to be examined in detail.

The chainsaw starts and stalls: the reason

The reason that the chainsaw can stall right after the factory lies in the malfunction of a certain part of the equipment.