Despite the name, even one-hand angle grinders, in which the body is used for the main grip, are equipped with an additional removable handle screwed into two or three fixation points on the gearbox.
Titan PSUM11125E, Proton MSHU-125/1150 Semi-Pro are equipped with more powerful electric motors, for which it was necessary to increase and lengthen the case. With them, the second hand is already not used to clamp the workpiece. Such a tool is held with both hands, but due to a reliable grip, it has become easier to control the position and wiring of the rig. Cooling is also improved, as on one-handed the vents are partially covered by the palm.

The thinner the disc, the faster the workpiece is divided into parts and less motor power is required. For cutting, the weakest but lightest angle grinder is often chosen. The power of small angle grinders can be 720 watts, like Titan BSUM7125, and large 2000 watts, like Einhell TE-AG 230/2000

The requirements for angle grinders for grinding are very different. Grinding wheels 6 mm thick are heavier and require additional watts to unwind. When peeling, many locksmiths increase the pressure, trying to remove a larger layer from the surface in one pass and crush the engine. When pressed, it is more difficult for a low-power motor to spin and it overheats faster.
When cutting workpieces, friction occurs at the end of the disk (1-3 mm), and when grinding, the angle grinder is tilted and the contact width of the wiper blade is several centimeters.

When choosing powerful large grinders for roughing parts, like the Dnepr-M MShK-2700 (2700 watts) or the Titan BSUM26230 (2600 watts), the weight requirement fades into the background. Grinding is performed under the own weight of the tool, and not on the weight, I only control the trajectory of the tooling and slightly presses.
Among the small angle grinders, the leaders in power are: Forte EG 14-125L with 1400 watts, Makita GA5021C with 1450 watts, Svityaz SKSh 15-125 DR with 1500 watts. 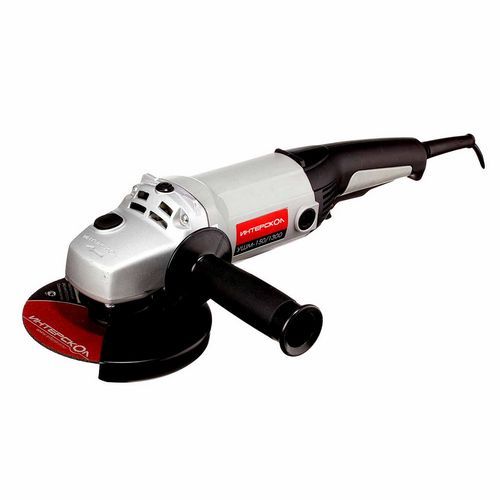