Slate is good for roofing as a cheap, fire-fighting and sound-absorbing material. It is easy to work with, it is easy to replace individual sections, and the only difficulties that arise are the need for cutting. Here, there are just a lot of nuances: the harmful dust that scatters everywhere, the tools quickly dull from the fibers, and the fragility of the sheets themselves.

Asbestos dust is not simple. these are special microscopic fibers, which quickly clog the wool and gear of any tool during the cutting process. Therefore, as builders like to say, for cutting slate, choose the tool that you do not care AL-KO. Asbestos fibers deliver all these problems. They provide anticorrosion resistance and fire-prevention properties to sheets, resistance to any mechanical and temperature influences.

What is a flat slate?

First, answer the following question: how much slate do you need to cut? The fact is that some tools are easiest to use for a small amount of work, and completely different are needed with a different approach.

Secondly, flat slate today is produced in very different widths, composition and even the percentage of asbestos content. All this in turn depends on how long the fibers are, what is their diameter and how evenly they are arranged. All this in production is controlled by GOST18124-95.

The difference between wavy and flat slate is that the latter is much thicker. Have you ever wondered why metal tiles, profiles and other similar roofing materials look exactly like that? Is it really all about decor? In fact, the profiled shape gives the material additional bending stiffness as well as durability. Why the thickness of the sheets themselves can already be made thinner. But the flat slate is already more dense and more fragile.

In general, you can deal with two types of slate:

Typically, the thickness of a flat slate is in the range of 4-5 mm, but one whose parameters are from 8 to 10 mm is considered durable. Flat slate with a thickness of 10 mm is often used in the roof of small outbuildings. It is weatherproof and most affordable.

How to cut slate without any dust

If the wave slate is quite difficult to cut because of its shape, then the flat slate is so simple that it is easier to break. Why so? The fact is that when cutting slate a lot of dust is released, which is harmful not only to the tool, as we just said, but also to your health. Therefore, those who protect both the one and the other find many ways how to do without cutting at all. over, because of the large amount of dust, it is not recommended to cut the slate indoors. it remains only to break it.

Slate really breaks easily. all thanks to its fibrous structure. It is only important to do it smoothly without damaging the corners. And for this there are as many as three ways:

So, the easiest way is to outline the desired cut line, draw it with something sharp, place a bar and gently break the slate:

Or they just cut a 1 mm hole. a flat slate will easily break in this place.

Method number 2. We break the slate with a nail 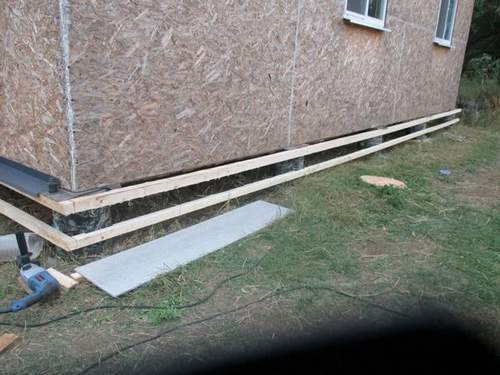 The hacksaw is also suitable for cutting slate on foam concrete.

Method number 4. Cut the slate with a cutter

If you have to cut a flat slate directly in the room. forget about power tools, too much dust and noise. Take a good steel cutter and follow these instructions:

If there is no other equipment at hand, most often flat slate is sawed with a fine-tooth hacksaw. True, from time to time it will have to be sharpened.

How to cut slate with special tools

So, how to cut a flat slate, if you still have to cut it?

We cut the angle grinder: we select a disk

So, to cut a large amount of flat slate, take an angle grinder with a diamond blade. Cutting the slate will be quick, accurate, even and safe. The only negative when working with this tool is a lot of dust. But the relatively cheap angle grinder can easily cope with this task.

When working with an angle grinder, grab it by one handle and drag it towards you. under the own weight of the tool, everything will cut well:

The diamond wheel cuts flat slate easily and quickly. As for the disk revolutions, 2000-3000 allow you to work easily and the tool does not heat up. By the way, with the help of an angle grinder and a diamond disk, you can immediately grind the edges of the slate. Tip: when working with an angle grinder, also put on protective headphones. the sound will not be pleasant.

One of the most affordable and practical options is a stone cutting wheel that can be inserted into the cheapest simple angle grinder.

Another good way that is often practiced today is to make only an incision on a slate using an angle grinder, and then break the sheet.

We cut with a saw: we select a coating and teeth

It perfectly cuts the slate of the saw with a special Teflon coating, which on the one hand protects the saw blade, and on the other, significantly reduces friction with the material. And less friction. less dust and easier work. Such a saw is not much more expensive than usual.

Secondly, you should pay attention to the teeth of the saw: the larger they are, the faster the slate will be sawed. And it’s definitely faster than a simple hacksaw.

We cut with an electric saw and a chisel

This slate is traditionally cut with a chisel and circular electric saw:

Another suitable tool is a chipper. He has a built-in diamond blade, which is able to achieve high speed revolutions. But, because This “toy” is expensive (because it’s professional), but because home craftsmen do something like it themselves: they connect a parquet and a fine-toothed circle on a tree. Cutting slate with this tool is quite convenient.

Cutting with a jigsaw

But the worst is that an ordinary cheap jigsaw can do this. it wears out too quickly. Most suitable for such work is a jigsaw with a HCS saw made of high carbon steel, which is designed to work with soft materials.

It also copes with cutting a flat slate with a jigsaw with a file, on each tooth of which a victory tip is soldered. Such a tool is convenient not only to cut sheets according to certain parameters, but also to make curves and arcs.

Another good option, especially if you have to work with slate often and professionally, is a jigsaw with a BIM saw. When cutting sheets, such a tool will never break even thin corners of a flat slate.

We cut on a home circular

Cutting a flat slate is also not difficult on a regular circular, 2 kW. Put a circle with carbide taps on the tree so that there are more teeth. It turns out everything quickly and without any problems. Wear safety glasses, wide-sleeved clothing, and durable gloves. It is only important that the sheet itself is fixed.

If you use a manual circular, then set the speed in the range of 3500-4000. So the slate will cut evenly and much cleaner than with a maximum turnover of 5500.

How to minimize the amount of asbestos dust?

Opinions about the dangers of inhaled asbestos fibers today are very different, and even completely opposite. Our compatriots, for example, who worked all their lives in factories with slate without any masks, do not have any health problems regarding the respiratory tract.

But British doctors say that it’s worth only once to inhale asbestos dust in order to detect lung cancer in 20 years. over, with one breath, up to 700 thousand harmful fibers enter the body at the same time!

Take one thing into account: asbestos dust is really harmful in the course of active operations with slate. and this, first of all, its sawing.

So, let’s start from the beginning. The most common slate, which has been roofing houses for several decades, consists of the following components:

In addition, some experts believe that only dust from amphibole asbestos, which is mined in Africa and is not used in domestic flat slate, is carcinogenic (only chrysotype asbestos is used here).

For example, amphibole asbestos was banned several years ago in such large countries as Germany and the United States. Billions were spent looking for artificial substitutes and the struggle for markets for new materials has become particularly fierce.

Chrysotile asbestos is another type of roofing slate. Strong and refractory material is produced and used to this day, with 50% of it being exported to other countries. The price for it is low, and therefore it is difficult to talk about competition. Why are the reports of world media about the unexpected carcinogenicity of all materials containing not only amphibole asbestos, but also chrysotile asbestos, most Russian scientists perceive critically. as a regular competitive attack on the international market. Although it is worth noting that the issue of banning the use of this raw material is now raised quite high.

The whole problem is that asbestos fibers tend to irritate lung tissue. and constantly, because of which the body first produces benign tumors in such places, and these can degenerate over time. On the other hand, glass and cement can cause the same problems. Those. almost every person can have micro-tumors in the lungs, but they can degenerate into malignant ones only in people predisposed to cancer. Therefore, be that as it may, the airways must be closed to all participants in the process.

Secret number 1. We use construction tape

Water will significantly reduce the amount of dust. soak the slate before cutting. over, moisture, in turn, will also facilitate the process itself, additionally protecting the instrument used from dullness.

It will be easier for you to do this in stages:

Let’s say this is the most accurate and healthiest way to cut. Wet slate will naturally emit far less asbestos dust than dry. In this case, the dust combines with water and you get such a paste. Believe me, pasta is already better. you can’t inhale it. Be sure to rinse the resulting dirt from water and asbestos dust with water from a hose. both from tools and from sheets. Otherwise, if it hardens, it will not be washed off.

On the other hand, water can damage the angle grinder itself, and therefore it is not worth literally pouring this particular tool. Naturally, when working with electricity included in the outlet, water for the instrument does not need to be poured. just add from the spray gun. Just be careful: sheets from moisture become not only more elastic, but also fragile. And keep in mind that water does not cope with asbestos dust by 100%, and therefore you need to work with a quality respirator and glasses.

An ordinary vacuum cleaner will also help to cope with dust during slate cutting: just ask an assistant to put the pipe near the cut line and move after you.

Another important point: a person with a cutting tool should stand so that the wind lifts dust from him in the opposite direction.

You will be surprised, but it’s easiest to cut flat slate. in winter. The fact is that snow generally likes to attract dust. and now all the harmful particles will remain under the cut, you just need to put sheets of slate on it.

As you can see, Russian masters have already adapted to everything!

CIMFLOK.COM 2023
By continuing to use our site, you accept our use of cookiesOkPrivacy policy