I have in operation a chainsaw Champion 137/142 (as it is written in the instructions). It worked fine, but now it began to spontaneously during sawing up speed (I do not add gas) and stall. They told me to clean the air filter, opened it — it seemed not very dirty, started it — it works without it, but I suspect that while I was driving from the section to the garage, I managed to cool down and the problem did not appear on the cold engine.

It looks more like a lean mixture. either the fuel filter is dirty or the fuel tank-filter-hose-carburetor chain has air leaks. Air suction in the crankcase can also be, although it is extremely unlikely that with it the saw would either start poorly or not start at all.

I bought Champ 138 for work with a chainsaw and faced with this problem: after 5 work, it stalls idling after a gas discharge, starts up hard after that, grabs it several times and immediately stalls. 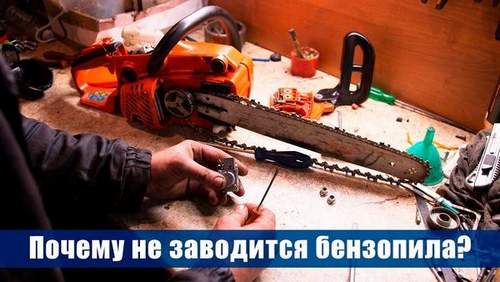 There is a suspicion of a rich mixture, as the cold saw on the choke does not start, I start looking without choke, a candle in black soot. What carburetor screws to twist? The service center is far away. I’ll try to replace the candle, but I doubt that it will help. Which candle is suitable for this model?

Actually, without a special key, the carburetor cannot be adjusted. Screw "L" need to tighten. NHSP LD Bosch Oregon NGK N6 HS8E O-U17 BPMR6F / BM6F, RDJ7Y / DJ8J. These are the candles that stand on this saw.

I have a Champion 138-16 chainsaw in operation. during operation, it died out for no reason, the spark disappeared, the candle changed, the same thing. How to fix?

Most likely, the ignition unit.

I bought and am working as a chainsaw Champion 137 and the problems started on the first day. After 10 minutes of working with a saw (average load), the saw stopped gaining momentum. When progazovka saw chokes. After the diagnosis in with. c. the problem repeated. Idling holds normally. What could be the reason?

Most of all it looks like dirt in the carburetor or manufacturing / assembly defects.

I bought Champion 142 in the fall, it starts very hard when it starts up, it works cleanly and stably. If you drown it, you won’t start it until it becomes cold. I heard about some "easy start" with this saw. is that a function like that? Maybe someone will tell you what to do?

About "lung" launch. each one has his own. Try to start with a syringe. no more than 1 cube. directly into the carburetor, and be sure to hot, if it works, then the carburetor needs to be adjusted.

Prompt for repairing chainsaws Champion 142. Symptoms. during operation can arbitrarily lose power and stall, can gain momentum without power, and can work normally. It is noticed that in the cold, and also when it is cold (0 10g), the chain saw works and starts like a clock, but at 20 and above it starts up, sometimes refuses or grabs and stalls. If you start, the problem begins, as described above. What I corrected: complete cleaning of the carburetor, replacing the spark plug, replacing the gasket on the carburetor. after that, it began to stall even less. The candle is alternately wet or black or white or light brown. that is, the quality of the mixture is clearly wildly floating. The saw almost did not work. 2 trees of everything were sawn. normally it was enough for them only and then not completely. Fuel. 95. Oil. semi-synthetic of well-known brands (for 2t for chainsaws / trimmers). There are no questions to the mixture. because the third year trimmer perfectly plows on it. What else to do, I do not find any obvious signs of malfunction. it remains only to search for the parts by the method of replacement?

I do not like that there is no system in the appearance of a malfunction. and the color of the candle is also a serious indicator of the problem! Do you still have a guarantee? If so, then you need to be in service and, probably, you can demonstrate this problem to them when handing over the chainsaw for repair! When carburetor gaskets were changed. why did they change? What is the condition of the old gaskets. did you notice any traces of tears and suction of extraneous air on them? If the warranty is already over. then I would first try to find a while "substitute" carburetor and have a chainsaw Champion on it!
In my opinion, only a carburetor is supplied in spare parts and in the spare parts for carburetor repair kits for your saw does not happen? I excluded the gas tank plug and the gas hose and gas filter from the cause of the problem even before replacing the carburetor! Then (if you did everything right, as you wrote earlier. it’s about cleaning the carburetor with a complete disassembly), I would remove the carburetor and silencer and make the intake and exhaust plug caps and try "oppress" overpressure of about 1 atm (serviceable oil seals in the crank chamber should "Keep" such excess pressure) the engine to determine the place of extraneous suction of air into the engine! Check gasket between crankcase and cylinder! And only then I would completely dismantle the Champion chainsaw and look at the condition of the main bearings and seals and the gasket of the joint of the two halves of the crankcase! The condition of the piston and cylinder parts can be seen with the carburetor and the chainsaw silencer removed! Of course, such malfunctions are best eliminated under warranty in a service workshop with a warehouse of spare parts or a well-equipped garage, when there is compressed air and all the tools for crimping the engine! The replacement carburetor in the same place is easiest to find! Something seems to me, the ignition system has nothing to do with it! Here’s a plan for troubleshooting!

The problem with the Champion 137-16 chainsaw, gasoline does not enter the hot carburetor. Symptoms. only the air in the fuel supply button (aka nipple) if you start a hot saw, then the saw will work and gas will come. as the tank runs out or the saw stops for a couple of minutes, then again there is no gasoline from the carburetor. In the cold, everything shakes and everything arrives. cleaned all the filters. I checked the fuel supply jet by removing the hose from the carburetor. the jet is good. What could be the problem and how to fix it?

I have never met a situation so that the valves would stop working hot, at least at the carburetor primer, and then resume work after cooling. Bring to the service, according to your description, the fault can not be localized. The primer either shakes or not, there is no other way, there is nothing to break there. self-repair. Or try without a primer at all, turn off the primer, remove the tubes from it, squeeze them. Well, it will be necessary to work more on the cold starter.

Chainsaw Champion 137, for some time now problems with speed. At idle, the chain quietly creeps along the tire, if the gas trigger is pressed for a long time under load, the chain does not even think to stop, it spars at idle as crazy, until I slightly extend the air damper control lever. it helps. Here, too, something has changed. Previously, I started the cold engine according to the instructions: closed the air, pulled the starter, opened the air, turned on. Now, if it is possible to start this way, the Champion chain saw stalls almost immediately, as soon as you pull the trigger of the gas, and sometimes without it. With the shutter closed, it starts without problems, but even when you press the gas, it sometimes chokes and stalls, if you hurry up and do not let it warm up at idle (the chain flies at a furious speed). And she began to consume a lot of oil, more than two tanks of oil go to the tank of the mixture, after work the whole chainsaw is covered with oiled sawdust. Before, it was the other way round, up to half the oil on the tank of the mixture, although before that I used the oil intended for preparing the mixture, now I use the usual cheap for two-stroke engines to lubricate the chain. I can’t imagine how all this can be connected with each other, I simply listed what became alarming. What do you advise?

Carry in service for diagnosis. the reasons may be mass. air leaks, carburetor wear. about the oil, you need to inspect all the holes for the passage of oil and perhaps a dull chain that is not able to give large sawdust rolls a trifle, like a file. Some pumps have an oil flow regulator, as well as the wrong type of oil, more liquid. change the oil.

I have a Champion 138 chainsaw in operation, this is my first saw. Starts up normally if the shutter is clicked down to release one. does not take turns, stalls. Having read it now, I just found out that the chain should be automatically lubricated) it means that it does not lubricate me. Give advice, please, what could be the reason that it is not gaining momentum (stalls) and why the chain is not lubricated?

Remove the muffler and unscrew the spark plug and use the flashlight to look into the engine. If there "furrows" then, in principle, everything is a replacement for the CPG. If everything is good there and there is compression at the same time, check the fuel filter.

After the break, I sawed a chainsaw Champion 142 birch today. Not deaf at idle, start up the first time. It was kept seasoned with oil and filled with mixture in a bag. There was no smell of fuel in the car. Confuses oil consumption for the chain. On a fuel tank. half a bottle of oil. Is it either due to the fact that the fuel during the break-in period is spent more or is it necessary to increase the oil supply?

If you do not saw a dry or burnt tree, then the oil consumption is within the normal range. In addition, carburetors in chainsaws are initially tuned by manufacturers to a slightly richer mixture than necessary. Thus, they are insured against insufficient lubrication of the cylinder during the break-in period. When this period is over and you make the carburetor adjustment of the Champion saw, the fuel consumption will decrease slightly, which, while maintaining the same oil consumption, will make the ratio between them more optimal. It is unlikely that it will be possible to increase the oil supply, if this is not provided by the manufacturer in the design of the pump. Although you can experiment with the oil itself, try using a lower viscosity oil.

For work I use the Champion 137-16 chainsaw. Tell me, what is the point of spraying oil into the cylinder? He is with a chrome finish. This is when the cylinder is uncoated so that the rust rings do not pick it up with oil. With a carburetor, the meaning is also unclear. But you can’t splash it into the channels, but just what gives it to the diffuser?