Hitachi angle grinder is especially popular among Russian builders. There are two reasons: a high degree of reliability and the absence of fakes. In addition, the Japanese brand, founded in 1910, has an affordable price, a lot of innovation, and high reliability.
Hitachi angle grinders (angle grinder) are available in several varieties, depending on power.
The purpose of this article is to offer DIY repair methods for Hitachi grinders. Repair of Hitachi ears is usually carried out under warranty at service centers. But after reading the proposed instructions, you can easily repair a Hitachi angle grinder.

Features of the design of grinders Hitachi

Even in appearance, you can immediately say that in front of you is a Hitachi angle grinder. The upper plastic case of the Hitachi ear is made up of two parts of different colors and has original form linings. 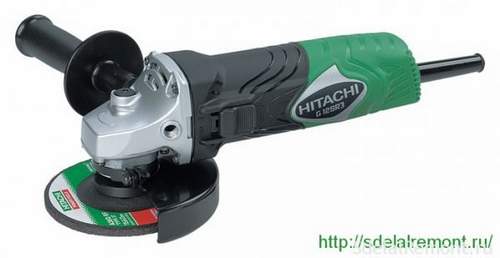 The external contours of the body parts are an angle grinder, a special bright green-black color, an extra handle with the obligatory marking of the model, and the inscription in bright white. these are the main differences in the appearance of the Hitachi angle grinder.

Under the Hitachi brand, several models of grinders are produced. We will single out the most popular ones: G13SE2, G13SR3, G23SEY, G23SRU.

The numbers in the designation indicate the maximum diameter of the cutting wheel used.
Hitachi angle grinder, indicated by the number 13, have power up to 1000 watts. angle grinder with numbers 13 are designed to perform small work with a circle of 125.
For grinders with numbers 23, power is more than 1000 watts. For grinders with designation 23, 230 discs are used and more complex work can be performed.
A feature of the design of Hitachi grinders is the presence of overheat protection and an advanced cooling system.
All Hitachi angle grinders are equipped with an extra handle.
Structurally, the angle grinder of the Hitachi family does not differ from each other. Although minor changes may occur.

Hitachi angle grinder repair is not possible without tools. You must prepare a set of screwdrivers, a device for monitoring short-circuited turns in the windings, a tester, pliers, open-end wrenches. Do not dispense with improvised devices if you want to repair a Hitachi angle grinder with your own hands.

It’s good if you have a screwdriver and interchangeable screwdriver bits, correctly selected according to the slots of the unscrewed screws.

Of the fixtures you will need: bearing puller, press, vise, soft metal extensions.

Pullers will be needed to remove gears and bearings. In a vice it is convenient to clamp separate nodes the angular grinder. The horn nuts unscrew the fixing nuts of the pinion gear.

During the repair can not do without lubricants, flushing, paint.

To wipe, you will need rags or pieces of clean material.

Do not forget about the correct equipment of the workplace. It should be well lit.
All faults The Hitachi angle grinder can be divided into two types: electrical faults and mechanical faults.

Hitachi angle grinder suffer breakdown of switches, carbon brushes, wire breakage of stator windings.
As with all electric tools, the appearance of a good electrical part is largely dependent on the condition of the carbon brushes. In the Hitachi angle grinders, carbon brushes are installed with an integrated device, popularly called a “shot”. The task of such a device is to prevent the inclusion of Hitachi grinders with a high degree of wear of carbon brushes.
The weak point in the design of the electrical part of Hitachi grinders is the location of the input cable. In this place, most often there is a break, a kink, exposure of the cable.

Read more:  How to Choose a Circle for Angle Grinder

A drop in the power of a power tool is connected with an open or short circuit of the rotor windings.

Repair of a rotor of a Hitachi angle grinder is no different from a rotor repair of any angle grinder. Not every consumer will be able to eliminate this kind of malfunction. To do this, you need to have not only special devices, but also the skills of the winder. It is preferable to send a failed rotor to specialized service centers.

But for fans to get to the truth, we recommend that you familiarize yourself with the rotor rewind algorithm.

The rotor failure is indicated by the appearance of burning in the area of ​​the collector. As a rule, the lamellas burn out, a dark coating appears on the wires of the winding.

The rotor must be removed from the housing:

If there is an IR-2 device, then it is possible, without disassembling the rotor, to measure the presence of a short circuit of turns or open windings.

Disassembly of a failed rotor begins with the dismantling of the rotor bearings of the rotor and the impeller from the armature shaft. Bearings and impellers are recommended to be removed with special pullers so as not to damage parts. If the collector is damaged and cannot be repaired, it must also be removed using a puller. Pre-solder the ends of the windings soldered to the collector lamellas. It remains to remove the burned winding. Having cut the winding end with a hacksaw, count the number of turns in several grooves, draw the direction of winding, determine the percentage of filling in the grooves of the core of the armature. Using a micrometer, measure the diameter of the wire used. You will need this data if you decide to wind the anchor with a Hitachi angle grinder yourself.

The stator malfunction is most often indicated by a significant overheating of the casing by an angle grinder and a spontaneous set of revolutions that cannot be regulated. The malfunction can be determined by pulling the stator out of the housing:

Stator breakage is easily determined by the tester. But the inter-turn short circuit is best measured with an IR-2 device or an oscilloscope. Stator repair do-it-yourself angle grinder Hitachi can be done at home. But you need to have some skills.

A failed stator is first disassembled:

The manufacture of the stator is described in detail on the pages of our site. For those who wish it will not be difficult to complete this work.

Read more:  How to Remove a Bearing from an Angle Grinder

Some useful tips when winding:

Electric tool control circuits are simple in construction. Perform the task of smoothly starting the tool, possible adjusting the speed, turning the tool on and off. The control circuits include a switch, a speed controller, an electric motor, carbon brushes, a power cable and switching elements. Consider the work of the electrical part of a Hitachi angle grinder using two models as an example: Hitachi G13SB3 and Hitachi G23SCY.

The most common malfunctions in Hitachi angle grinders occur when the power cable fails at the entry point, the carbon brushes wear, pos. 39, and the switch breaks, pos. 42.

This kind of malfunction is eliminated by replacing a failed part or piece of wire.

At Hitachi angle grinders, the reliability of the gearboxes is admirable. But this is with proper operation.

During overheating or periodic jamming of the tool, dust, untimely replacement of carbon brushes, no angle grinder will last long.

Hitachi angle grinder reducer is manufactured with high precision. In the ears, there is practically no beating of the teeth of the gear wheels. Gear wear is particularly affected by improper use. Consider repairing Hitachi ushm gearboxes on two models: Hitachi G13SR3 and Hitachi G23SCY.

Gearbox design Hitachi angle grinder G13SR3 with disc up to 125

In angle grinders with a disk diameter of up to 125 mm, the driven gear, pos. 33, is mounted on the spindle shaft, pos. 26 using the key connection pos. 25. The precision of the keyed connection eliminates the formation of backlash of the driven gear on the shaft. The presence or absence of play can be determined by rotating in different directions of the spindle shaft. If there is a large backlash, both gears must be replaced at the same time, since they are made in pairs.

The shaft of the driven gear is disassembled in the following sequence:

To remove the pinion gear pos. 33, it is necessary to clamp the rotor pos. 8. The gear is fixed with an M6 nut, pos. 4. Using an open-end wrench, unscrew the nut by turning counterclockwise. After removing the gear, remove the rotor from the gear housing.

In Hitachi angle grinders, defective bevel gears are replaced by a pair. To replace the gears leads to wear of the teeth, licking, the destruction of several teeth.

Gearbox design Hitachi angle grinder G23SCY with disc up to 230

The reducer of grinders with a disk up to 230 mm is much more powerful. In the design of the gearbox 230, the coupling pos.24 and the damper pos.23 are used. This design plays the role of a clutch, preventing shock when biting the working disk or its emergency stop. The clutch allows you to smoothly start the angle grinder.

To dismantle the gears of the gearbox with a disk up to 230 should be resorted to, making sure that no restoration work is possible.

Dismantling the driven gear assembly is no different from a similar disassembling the assembly of an angle grinder with a disc of up to 125 mm. The only difference is that the angle grinder 230 gear pos.20 is pressed onto the shaft pos.29. It is better to remove the gear from the shaft using a press, but improvised means will do. For example, a vise. The shaft is installed in the bearing pos.27. Bearing Type 6302DD.

Use a special flushing fluid to remove old grease. To thoroughly remove all old grease, it is recommended that you heat the gear case with a hairdryer until the grease turns into liquid.

New grease is applied to the gear housing in an amount occupied by less than half the body volume. To lubricate gearboxes, manufacturers produce their own grease. But Russian manufacturers have learned to make lubricants that are not inferior in quality to foreign ones, but whose price is much lower.