Without a doubt, a power tool greatly facilitates our work, and also reduces the time of routine operations. In the course of now and all kinds of self-powered screwdrivers.

Consider a device, a schematic diagram and repair of a battery charger from a company screwdriver "Interskol".

First, take a look at the circuit diagram. It is copied from a real charger circuit board. 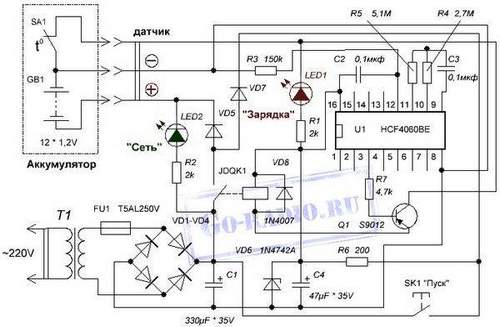 The power part of the charger consists of a power transformer GS-1415. Its power is about 25-26 watts. I considered it according to a simplified formula, which I already spoke about here.

The reduced alternating voltage of 18V from the secondary winding of the transformer is fed to the diode bridge through a fuse FU1. The diode bridge consists of 4 diodes VD1-VD4 type 1N5408. Each of the diodes 1N5408 withstands a direct current of 3 amperes. The electrolytic capacitor C1 smoothes the voltage ripple after the diode bridge.

The basis of the control circuit is a microcircuit HCF4060BE, which is a 14-bit counter with elements for a master oscillator. It drives a bipolar transistor of the p-n-p structure S9012. The transistor is loaded on an S3-12A electromagnetic relay. A unique timer is implemented on the U1 chip, which turns on the relay for a given charge time. about 60 minutes.

When the charger is connected to the network and the battery is connected, the JDQK1 relay contacts are open.

If you look at the diagram, it is not difficult to notice that before pressing the button "Start" U1 HCF4060BE is de-energized. disconnected from power source. When a button is pressed "Start" the voltage from the rectifier is supplied to the Zener diode 1N4742A through the resistor R6.

Next, a reduced and stabilized voltage is supplied to the 16th output of the U1 chip. The chip starts to work, and the transistor also opens S9012, which she controls.

The supply voltage through the open transistor S9012 is supplied to the coil of the electromagnetic relay JDQK1. The relay contacts close, and the battery is supplied with voltage. The battery starts to charge. Diode VD8 (1N4007) shunts the relay and protects the transistor S9012 from the reverse voltage surge that occurs when the relay winding is de-energized.

The VD5 diode (1N5408) protects the battery from discharge if the mains power is suddenly turned off.

The replaceable battery GB1 is a unit in which 12 nickel-cadmium (Ni-Cd) cells are connected in series, each of 1.2 volts.

In a schematic diagram, the elements of a removable battery are circled by a dotted line.

The total voltage of such a composite battery is 14.4 volts.

Video: How to Charge a Power Supply for a Screwdriver

Also, a temperature sensor is built into the battery pack. In the diagram, it is designated as SA1. In principle, it is similar to the KSD series thermal switches. Thermal Switch Marking JJD-45 2A. Structurally, it is fixed to one of the Ni-Cd elements and fits snugly to it.

The algorithm of the circuit is quite simple.

When connected to a 220V network, the charger does not show its work in any way. Indicators (green and red LEDs) do not light. When a removable battery is connected, the green LED lights up, which indicates that the charger is ready for use.

Read more:  How To Connect A Cordless Screwdriver To The Network

After charging, the voltage at the battery terminals can reach 16.8 volts.

Such an operation algorithm is primitive and eventually leads to the so-called "memory effect" at the battery. That is, the battery capacity is reduced.

Here is the charging characteristic of one 1.2V Ni-Cd battery cell.

Specialized charge controllers for Ni-Cd and Ni-MH batteries, as a rule, operate on the so-called Delta method.ΔV. The figure shows that at the end of the charging of the cell, the voltage decreases by a small amount. about 10mV (for Ni-Cd) and 4mV (for Ni-MH). From this change in voltage, the controller determines whether the cell is charged.

Let’s go back to the charger circuit from the screwdriver. Now it’s clear that the JDD-45 thermal switch monitors the temperature of the battery pack and breaks the charge circuit when the temperature reaches somewhere 45 0 C. Sometimes this happens before the timer on the HCF4060BE chip works. This happens when the battery capacity drops due to "memory effect". In this case, a full charge of such a battery occurs a little faster than in 60 minutes.

Read more:  Which Mower Is Better Than Virax Or Lisitsky

As you can see from the circuitry, the charge algorithm is not the most optimal and, over time, leads to a loss of battery electric capacity. Therefore, to charge the battery, you can use a universal charger, for example, such as Turnigy Accucell 6.

Possible problems with the charger.

Over time, due to wear and moisture, the SK1 button "Start" starts to work badly, and sometimes even fails. It is clear that if the SK1 button malfunctions, we will not be able to supply power to the U1 chip and start the timer.

There may also be a failure of the Zener diode VD6 (1N4742A) and the U1 chip (HCF4060BE). In this case, when the button is pressed, charging does not occur, there is no indication.

In my practice, there was a case when the zener diode struck, it is a multimeter "called" like a piece of wire. After replacing it, charging began to work properly. Any zener diode for a stabilization voltage of 12V and a power of 1 Watt is suitable for replacement. Check the zener diode for "breakdown" You can also, like a regular diode. I already talked about checking diodes.

After repair, you need to check the operation of the device. By pressing the button, we start charging the battery. After about an hour, the charger should turn off (the indicator lights up "Network" (green). We take out the battery and do "control" voltage measurement at its terminals. The battery must be charged.

If the elements of the printed circuit board are working and do not cause suspicion, and the charging mode does not turn on, then you should check the thermal switch SA1 (JDD-45 2A) in the battery pack.

The scheme is quite primitive and does not cause problems in diagnosing a malfunction and repair even for beginner hams.