The thermal relay is installed to prevent exposure to electric motors from significant and prolonged current overloads formed when one of the phases breaks or the shaft overloads. Also, with the help of TR, the winding is protected from subsequent damage after an inter-turn circuit. Read also the article ⇒ Voltage Relays.

What is a thermal relay?

Since the thermal relay in the circuits needs to be connected behind the magnetic starter, there is no need to duplicate the function of the contactor after opening the circuits in emergency cases. The choice in favor of such protection allows to achieve significant material savings for power contact groups. After all, it is much simpler to switch small currents of a single control circuit than to break three contacts at once under high current load.

Tip # 1: When connecting the device, remember that the thermal relay does not open the power circuit directly, it receives a control signal when the loads increase.

Typically, the design of thermal relays provides for two contacts:

After the relay trips, both of these contacts simultaneously change their position.

Thermal relays are available in several types, each of them has its own design features and area of ​​use. The main types are the following relays:

RTLs are 3-phase devices designed to protect electric motors from overloads, jamming of the rotor, continuous start-up, phase imbalance. Devices are placed on the terminal contacts of the PML starter. They can independently work as a protective device with KRL type terminals.

A PTT relay is also a three-phase device that protects squirrel-cage motors from prolonged starts, jamming, current overloads, and other equally dangerous emergency situations. Due to the design features, the relays are attached to the body of magnetic starters of the PMA and PME types, as well as as a separate device on a special panel.

Three-phase RTI relays are used to protect the electric motor from overloads, phase imbalances, locking and other difficult operating modes. Attached to the housing of the KMT and KMI starters.

TRN. thermal 2-phase relay, by means of which control over the start-up and operation of devices is carried out. It is equipped with a mechanism for manually returning the terminals to their original position, while the temperature of the medium does not affect the efficiency of the relay. 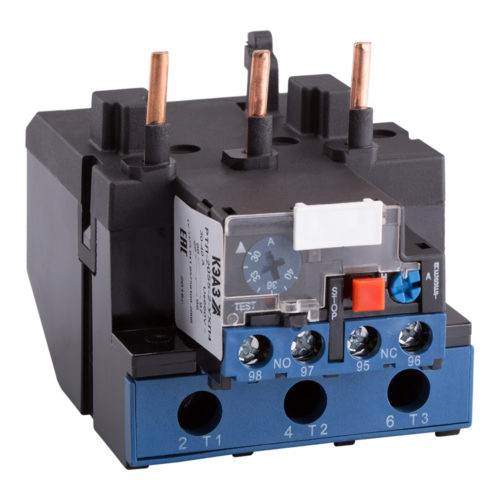 Solid state relays are 3-phase devices, the design of which does not provide for the presence of moving parts. Relays are also not susceptible to environmental influences; they are used in places with a risk of bursting.

In a relay of the RTK type, temperature control is carried out by means of a probe placed in the device body.

An RTE type thermal relay consists of a conductor made of a special alloy. When the pore temperature is reached, the conductor melts, thereby breaking the circuit. Built into the design of the electric motor. Read also the article ⇒How does the voltage monitoring relay work?

How to choose a relay according to the characteristics?

When selecting a relay, you should initially understand its main parameters:

The rated current of the relay must be identical to that indicated on the electric motor to which the device will be connected. The magnitude of the motor current can be seen on the bar located on its cover or housing.

Video: How To Connect An Angle Grinder Directly Without An On Relay

The mains voltage for the relay must be equal to the value of the network in which it will be located. 220 or 380/400 V. The type and number of terminals also matters, as various types of connection are implemented in contactors of various types.

The relay must also withstand the power of the electric motor to prevent false alarms. For three-phase motors, a relay should be selected that provides additional protection against phase imbalance.

Usually, the installation of a thermal relay is carried out together with a magnetic starter, which performs the connection and start of the electric motor. Devices are also available that are installed as a stand-alone device on a DIN rail or on a mounting panel. TRN or PTT.

Read more:  Which disc for an angle grinder to cut laminate

If the TRH relay has only a pair of incoming connections, there are still three phases in it. The disconnected phase wire leaves the starter to the motor, bypassing the device. The change in current in the electric motor occurs proportionally in all phases, therefore it is sufficient to monitor only two of them.

Devices are supplied with two groups of terminals in normally open and normally closed groups.

Below is a control circuit that disconnects the motor from the mains in the event of an emergency from phase failure or overload. The rotation of the engine is carried out in one direction, the inclusion control is performed from one place by means of the START and STOP buttons.

Switching on the relay in a 3-phase network, control is performed via the Stop and Start buttons

The machine is connected and voltage is supplied to the upper contact. After pressing the START button, the starter coil A1 and A2 is connected to the network L1 and L2. In the presented circuit, a starter is installed, the coil of which is designed for 380 V.

When the starter is turned on by the coil, additional contacts 13 and 14 are closed. The START button can now be released, but the contactor will remain on. This scheme is called "Start with a self-grab."

To disconnect the electric motor from the network, you must disconnect the coil. By following the direction of the current flow in the presented diagram, it can be noted that the shutdown will occur when the STOP button is pressed or the thermal relay terminals open (in the diagram, the device is indicated by a red rectangle).

Thus, in the event of an emergency during the operation of the relay, the circuit breaks, the starter is removed from the self-pickup, while disconnecting the electric motor. Before restarting after operation, it is necessary to inspect the mechanism to identify the causes of an unscheduled shutdown and not turn it on again until they are eliminated.

Read more:  Do I Need To Adjust The Speed On The Angle Grinder

Often the cause of the trigger is the increased temperature of the external air. this point should also be taken into account when setting up the mechanisms and their operation.

Tip # 2: In households, the area of ​​use of thermal relays is not limited to machines and other mechanisms of their own production. It would not be superfluous to use devices for installation in systems that control the current in the pumps of the heating system.

The work of the circulating unit is very specific. The fact is that on the cochlea and blades over time a calcareous deposit appears, which serves as one of the reasons for jamming and failure of the electric motor. Using the above connection schemes, you can assemble a control unit and a protection unit on your own. In the supply circuit, it is enough to set the thermal relay and connect the contacts.

In addition, the scheme of connecting a thermal relay by means of current transformers is no less interesting, intended for use when connecting powerful motors, for example, irrigation systems of large farms. When adding a transformer to the supply circuit, the transformation parameter should be kept in mind, equal to, for example, 60/5. This parameter means that when a current of 60 A flows through the primary winding, its value on the secondary winding will be equal to 5 A. Using this scheme will reduce the cost of acquiring components without compromising performance. Read also the article ⇒ Connecting a pointing relay.

The red color on the diagram indicates the current transformers connected to the ammeter and the control relay, for a visual representation of the processes taking place in the circuit. The transformer is connected according to the “asterisk” scheme with one common point.