How to cut a pipe straight with an angle grinder?

When dealing with construction or plumbing tasks, you need to know how to cut the pipe straight from an angle grinder. In the article, we will consider quick and easy ways to properly cut an angle grinder pipe so that the result is perfect.

Pipe cutting at an angle of 45 and 90 degrees

If you need to cut the pipe at an angle of 45 degrees, which is more often required when laying water and heating pipes. Steel, cast iron pipes that are cylindrical in shape are often used. In the installation work, rectangular or shaped pipes are used. However, the pipe of the angle grinder should be cut correctly so that it can be easily connected later. Therefore, you should carefully mark the pipe. 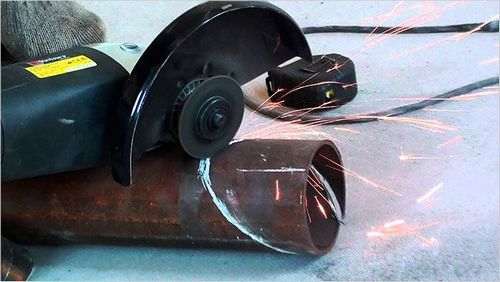 Some craftsmen try to mark the place of the cut using a tape measure, but we warn you that the result is likely to be negative. And for a positive result, consider the following professional recommendation.

Take a sheet of paper or cardboard, preferably A4, fold it diagonally and wrap it around the pipe where you plan to cut it evenly. The edges of the paper should be exactly aligned with each other. And the side of the paper that is closer to the end of the pipe was perpendicular to the axis. Then mark the cut line in a circle.

If you need to cut exactly at an angle of 90 degrees, then solve the problem quickly using paper or masking tape again. Wrap around the pipe so that the ends match. Make even lines and saw off.

How to cut a profile pipe straight?

Masters advise using a square when cutting a profile pipe. To do this, apply the square in turn to the sides, and turn and mark with smooth movements. After action, fix the pipe and cut. Prepare yourself a template that will come in handy in the future and save time. It is better to produce an angle grinder, so the cut will be smoother.

Read more:  How to Change a Disc to an Angle Grinder

How to cut a cast iron pipe?

When working with a cast iron pipe, keep in mind that it is a brittle material. Therefore, we will point out a method with which it will be possible to cut such a metal without damage.

Before starting work, make notes for the cut, just like with steel pipes. Place a piece of wood for support. Run your angle grinder around the circumference of the pipe making small cuts. Then take the chisels, insert them into the groove and hit hard with a hammer. Note that bakelite-based cut-off wheels are used to cut cast iron pipes.

If you don’t have an angle grinder on hand to cut a cast-iron sewer pipe or other purposes, use a metal hacksaw, chisels or special pipe cutters.

How to cut a gas pipe?

Cutting a gas pipe is dangerous, so it is best to entrust it to professionals. But if you are confident in your strength, then take an angle grinder, welding, hacksaw, gas welding to cut the metal.

How to properly cut a pipe at 45 degrees: tools

In various situations, household-level craftsmen often come to the question of the correct marking for accurate cutting of pipe blanks at an angle of 45 degrees. Today, there is a huge selection of tools, both for the domestic and industrial process of cutting pipes at any angle. The cost of such devices can be quite high.

It is proposed to consider methods of marking blanks for cutting at an angle of 45 degrees in a domestic environment without the use of expensive professional equipment.

The very process of marking the cut-off workpiece seems to be quite a simple matter. But it should be noted that the roundings made during the manual marking process will create an irreparable error after cutting, which will lead to inconsistencies and the formation of defective products. In order to eliminate such defects, it is required to make a simple tool for a clear marking of the profile parts. This makes cutting products at an angle of 450 much easier.
A regular 45-degree U-shaped steel section is a reliable tool for accurate pipe cutting. In this case, the size of the profile for the ruler must be selected so that it becomes possible to easily position the cut profile pipe in it.

Read more:  How To Make A Bed For An Angle Grinder

To perform such a tool marking the correct angle, you must also have the following additional tool:

How to cut a pipe at an angle

It is not difficult to make a measuring tool for cutting pipes. To do this, it is necessary to cut a segment with a length of 20-30 cm from the profile blank. By means of a goniometer, at any end of the segment, it will mark an angle of 45 degrees. Next, cut off the profile with the angle grinder. The resulting template needs to be tested for accuracy. In case of deviations, file the measuring tool.

Using such a hand-made marking tool, the process of cutting pipes is much easier, especially with a large volume of pipes. To mark, it is only necessary to place the cut profile pipe in the made device and draw the correct angle with a scribe. During the marking process, the length of the products is controlled. Next, you need to cut the pipe clearly along the line markings using an angle grinder. It is worth noting that at first the pipe is cut along the diagonal marks on both sides, then the straight, marked mowing lines are cut. These 45 degree pipe cutting templates will save you a lot of time and money.

When cutting round pipes at an angle of 45 degrees, the tool made for rectangular pipes is not quite suitable. For a more accurate streamlined tracing of the mowing line for an angle cut, it is recommended to use a paper template that is wound around the workpiece.

Patterns are developed in the modern world using computer programs.

The cut line changes depending on the angle and pipe diameter set in the program. Common patterns can be found on the Internet or you can remember our painted rulers from the school bench.

I would also like to consider a way to markup using a computer program. This is an extremely difficult way for those who are not used to working with a computer. It requires knowledge of a PC, the availability of programs for scans and drawings. We start with the execution of the drawing indicating the size of the circle and the slope. We make a so-called virtual template.

After that, using the printer, we print the image on a sheet of paper. The larger the pipe diameter, the more markup pages there will be. We cut out all parts of the drawing with scissors and with the help of tape, glue them. The finished template is applied to the pipe, and we make markings along the edge of the paper. This markup method is considered one of the most correct. If the computer does not have such programs, it is possible to use the Internet. It is possible to download a pattern for marking on the net. It also needs to be printed on a printer and cut out. We wrap the finished piece near the pipe and make markings.

Read more:  How To Make A Grinder For A Car From An Angle Grinder

How to cut a pipe at 45 degrees

When installing the pipeline, it is quite often necessary to cut the pipe at an angle. over, the angle should have just the degree that is needed for the structure. If the corner is not made correctly, it is unrealistic to make exactly the dimensions of the pipeline that were supposed to be made. For example, a pipe will rotate 45 degrees during installation, therefore, you need to know how to cut a pipe at 45 degrees. To do this, we need marking tools, an angle grinder or a hacksaw for metal.

Layout by means of a sheet of paper

One of the easiest ways is to mark the corner with a piece of paper. We fold the square sheet strictly diagonally. We take the pipe and wrap it in a folded page so that the edges of the diagonals are opposite each other. So, on the smaller side of the page, we have an angle of 45 degrees. We take any marking tool and mark the place of the future pipe cut along the mowing line of the page. So that the markings are not accidentally erased, it is possible to use narrow tape. This method of marking is convenient for a long pipe of huge diameter, and the cut of which is somewhere in the middle.

This is a collective farm speculative option for those who cannot make the markup by eye as written in the previous paragraph of this very post of mine. This method was spied on by workers who laid a main water pipe with a diameter of 500 or 700 mm under my office windows. The highest accuracy will not be here, but it is enough for welding, with a certain accuracy it is possible to set the cutting plane.