To simply saw a tree for kindling or to make longitudinal profiles for sheathing or construction in a home workshop. one stationary "circular" will be enough for the master. If he needs to make a series of more serious carpentry manipulations and make a more accurate cut, straight or with corners. he uses a carriage.

This tool is a clamp moving under special "slides" for wooden blanks or workpieces, which, with the help of small tips, is easy for every master to make.

In order to construct a carriage for a circular saw with your own hands and use it comfortably then in a home workshop, first of all, you should prepare a set of materials and tools for its manufacture: 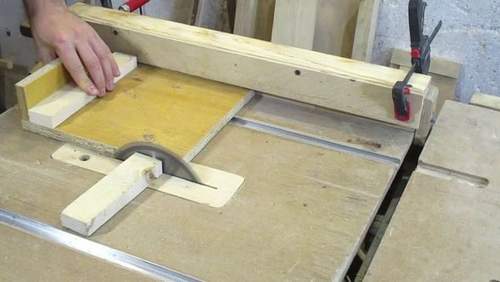 Reference. In addition, it is recommended to keep the vacuum cleaner “ready” in order to purge the structure from chips and wooden “dust” after cutting or drilling.

So, the construction details and the necessary tools are selected, you can proceed with the assembly and subsequent installation of the home-made carriage.

Since the carriage will “run around the saw table”, the first thing to do is guide grooves. To do this, take two U-shaped profile, approximately equal to the length of the table. You can adjust the dimensions of the angle grinder.

At the same distance from the location of the cutting disc, the circulars draw two lines parallel to it. Then, with the help of a manual milling cutter, U-profile holes are cut out on them, the chips are blown out of them and with the help of glue the pipe tubes are fixed in them. After the glue dries, the grooves are ready.

Step 2: Making the carriage base

Next, a mobile base of the trimming carriage is designed. For this, two strips are taken, which freely enter the U-shaped groove in thickness. But there is one point. the carriage will have to “slide” freely on the table, and for this it is raised by 2-3 mm above the table. To do this, nuts of the same thickness are laid out in the profile grooves at an equal distance, after which the guide rails are laid on them.

Video: How to Make a Carriage For Circular

Then glue is applied to them, which fixes the plywood strip-base. To squeeze it denser, you can fix the latches on the sides.

When the resin dries, the nuts are removed from the profile grooves and the master checks whether the carriage runs freely on them. After that, for convenience of further use, the carriage is cut on the sides along the profile of the table.

So, the base is ready and further on it thrust walls are installed. For this, two wooden blocks are taken: one of them is rigidly, with the help of self-tapping screws, fixed on the edge closest to the master so that it is strictly perpendicular to the cutting edge of the saw blade; the second is fixed along the upper edge, but only on one side. This is necessary so that the master can align this wall strictly parallel to the bottom. The operation is performed using a square.

After the walls are aligned, a trial cut is performed. It has two goals. with it, holes are drilled in the walls and the bottom of the carriage, and then measuring the sawn blank, they check whether the right angle of cut is correct.

Important. The height of the walls should be sufficient so that the cutting edge does not enter into more than half of it, otherwise the carriage may break during operation. and this is an unjustified risk when working with a circular saw.

So, the usual carriage with a straight broach is ready, but what if the master needs to saw something at a different slope, for example 60, 40 or 30 degrees? For such operations, an additional structural element, which is called the “combined square”, will be needed.

The name is not accidentally taken in quotation marks. the fact is that the base of the workpiece is indeed a square wooden platform. It is sawn so that it fits freely between the stops of the main carriage and is fixed to one of the sides at the bottom wall.

After that, the workpiece is cut, cutting out fragments from it at the required angles. the resulting bevels will be the guides along which the part is laid, which must be sawed at this angle.

After manufacturing, the “square” is rigidly mounted (on glue or self-tapping screws) onto the carriage. Another, more advanced option. in the square and base of the carriage, rounded grooves are cut with the help of a milling cutter, which allow the square to move along the base on a movable latch. It is made of a screw, a nut and two metal washers.

A detailed video on how to make the cross carriage described above:

Another example in the video:

In conclusion, we give a few subtleties that are useful to know if you want to make a homemade carriage for a circular saw:

Important. The master, no matter how experienced he is, should not forget that a circular saw is an aggregate of increased risk of injury, therefore, when making a carriage and working on a saw with it, you should always be careful and accurate and remember the safety precautions.

Having made an end carriage in such a simple way in the conditions of a home workshop, the handyman will have a handy, versatile tool that can be used in most types of carpentry.