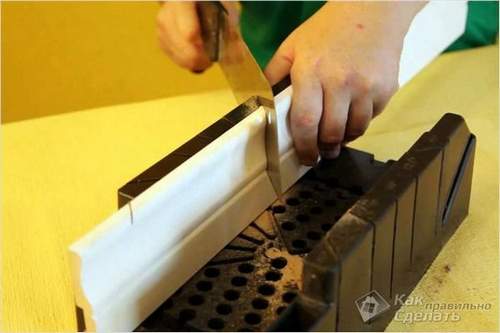 It is known that in order to obtain an ideal joint of two corner blanks of a ceiling plinth, it is necessary to correctly design a cut line for each of them. In this article you can learn about how to properly cut the ceiling skirting, as well as get acquainted with the devices that are necessary for this.

The following methods are available for slicing a ceiling plinth:

A miter box is a special device with which you can form an arbitrary angle from those that are in his set of cuts.

Use of miter box

When working with this device, the skirting board must be inserted into it in exactly the same way as it will be located on the ceiling. Holding the upper part of the workpiece, its lower edge must be pressed against the wall of the device and cut according to your chosen shape.

To prepare plastic skirting boards, you can use a conventional hacksaw for metal. But when applying it, you should not make significant efforts, since this can lead to the formation of chips.

Preparing joints with an arbitrary angle

Stencil Cutting Since the walls in the rooms do not always adjoin one another at 90 degrees. it is worth familiarizing yourself with the technique of preparing an arbitrary cutting angle.

Such a technique is usually implemented in the following two ways:

Read more:  How To Change Cartridge On Drills Makita Video

Cut line preparation Pay special attention to the fact that with this method of marking, maximum accuracy must be observed. The quality of the resulting joint will completely depend on how accurately you carry out this procedure (and of course on how accurately you design the cut on the workpieces).

In the same sequence, the preparation of the cut lines for the outer corner. But at the same time, there is no need to transfer the point of intersection of the marking lines to the skirting board, since in this situation it is the top conjugation point of the corner parts of the workpieces. In this case, you have to transfer the abutment point to the wall.

The final stage of work

The final fit of the skirting board

Upon completion of the operations on the design of joints, a control check of the fit of the workpieces on the cut should be carried out.

Read more:  How to Properly Install a Starter on a Trimmer

In the event that there are gaps in the joint, you will have to make it an exact fit by slightly cutting the plinth or processing the slices with sandpaper.

And in conclusion, we will introduce you to how to cut the skirting board more accurately. Fitting the line for joining adjacent sections of the baseboard should be done before you even start marking and trimming its length. If the operations are reversed (first, the length, and then the angle) and if the joint is unsuccessful, you risk completely ruining the workpiece.

For more information on the technique of cutting a ceiling skirting board for corners, see the following video: