How to cut the ceiling plinth in the corners The final stage in the design of the room. Installation of a ceiling plinth. How to make a corner correctly so that everything will come together without gaps, how to join in the outer and inner corners. Read on. 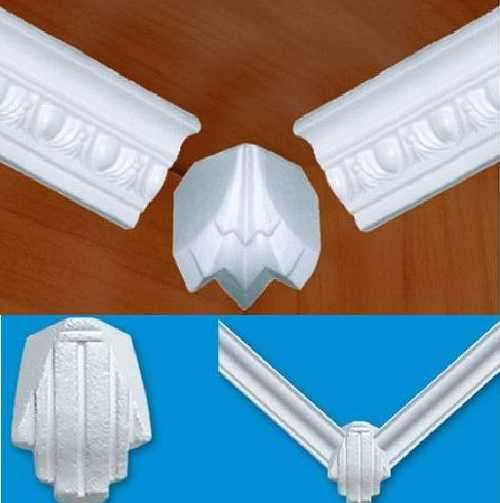 How to cut ceiling plinth in corners

The quality of the ceiling finish greatly affects the appearance of the room. Therefore, they try to do everything perfectly, or very close to it. The finishing touch to the design is the ceiling plinth. They give the finish a complete and holistic look. The strips themselves are mounted on flat surfaces simply: on special white glue, but problems arise with the design of the corners. Without knowing how to make the corner of the skirting board correctly, a lot of material deteriorates. We will tell you about how and what to cut it in the corners.

What and how to cut

When working with polystyrene skirting boards, they cut them with a good stationery knife without special devices. Its blade is quite thin and even, the cut is smooth, not wrinkled. If you work with a saw with polyurethane or polystyrene, do not press hard: you can wrinkle.

In general, to get used to the tool and material a little, take a piece and practice on it: cut, saw, trim. So there will be fewer problems when working.

The first way with a miter box

The miter box usually looks like a tray with vertical holes for a hacksaw. It can be made of wood, metal or plastic. This tool represents the oldest and simplest carpenter’s tool, designed for cutting wooden parts at an angle of 90 and 45. There are types of such a device for professional work, with a swivel mechanism, in which the cutting tool can be rotated and fixed in any position.

Ceiling corners are divided into internal and external, the method of joining them is slightly different.

Read more:  How To Cut A Floor Plinth

Trying on the ceiling plinth: the joining of the parts should be perfectly flat. If the result is not achieved and there are irregularities at the joints, you can trim the edges with a regular knife to a perfect fit.

All the nuances are well described:

How to make the angle of the ceiling plinth less than 90 degrees? You can adjust the corners in plastic models in the same way as described above. That is, using saws and heating. It should be borne in mind that stiffening ribs prevent the part from bending during heating. Therefore, they need to be trimmed as needed. For external mating, it is enough just to make an incision, and for internal mating, you will need to remove part of the partitions so that they do not interfere with the correct displacement of the corner shoulders.

The methods of joining moldings depend on the material, as well as on its decorative features. For example, it is desirable to mount an array on hardware. The large weight of the profile with an impressive width of the product will require the use of appropriate self-tapping screws. Adhesive solutions in this case will be unreliable. It is a completely different matter when it comes to foam or gypsum profiles. These are fairly lightweight and easily workable planks that adhere perfectly to glue and putty.

When combining two or more planks, the mating angle must be taken into account. On flat areas, docking at 90 and 45 degrees is used. In the first case, the molding is simply trimmed, and in the second, it is trimmed according to a template or with a miter box.

How to join the ceiling plinth in the inner corners with a simple relief? For this, prepare a suitable tool.

To cut the foam profile, you can use a metal hacksaw or hot nichrome wire. The good thing about hot fitting is that the wire thread makes a cut quickly, almost instantly, without leaving any burrs or roughness.

For laminate, plastic, as well as gypsum, a metal sheet is suitable. Fine teeth will avoid unnecessary chipping on skirting boards.

How to properly cut a profile at an inner corner? These angles have one peculiarity. They are formed by elements whose bottom edge is longer than the top. That is, when you attach them to the ceiling, the lower one will press against the walls, and the upper one will recede inward. It turns out that the upper perimeter of the skirting board will be smaller than the lower one.

The corners for the skirting board make the task much easier. They already have the necessary shape, so it is enough to dock them in a straight section with fillets. For plastic models of corners, an overlap joint is used, while for other materials, the technology allows you to make a snap joint.

The miter box is a simple carpentry tool that allows you to cut the workpiece at the desired angle. Most often it is a plastic, wood or metal tray with vertical slots for cutting at an angle of 90 and 45. There are also more complex miter boxes for cutting at 90, 60 and 45 degrees. For more professional work, a miter box with a swivel mechanism is used, where the hacksaw can be fixed at any angle to the workpiece.

How to cut a ceiling plinth with a miter box:

Next, we join the trimmed plinths and check the cutting accuracy. For a more accurate orientation, they also say that to complete the inner corner, it is necessary to start cutting from the front of the skirting board. Wooden skirting boards will most likely need to be filed after trimming.

How to cut a ceiling plinth with a miter box outside corner:

Trimming the workpiece with a miter box is only suitable if the angle between the walls is even 90 degrees. If the accuracy is poor, you will have to use other methods.