Choose between benizovoy trimmer and electric. The choice initially tended to electric, because they are cheaper, but almost all electric trimmers use a fishing line or a plastic knife, which for my purposes (a section overgrown with Canadian maple and burdock) was too tender a solution. As a result, the choice fell on the Patriot PT545. Looking ahead, I will say that I had experience working with STILL petrol trimmers. one with a knife, one with a fishing line and a system "Auto cut" (such nonsense with a plastic knife), and so Patriot is making all the more expensive STILL trimmers with the Auto cut system in all respects, and is a bit behind STILL with a metal knife! Well, this is my personal opinion.

The Patriot PT545 comes in two boxes. in one boom, in another motor and accessories 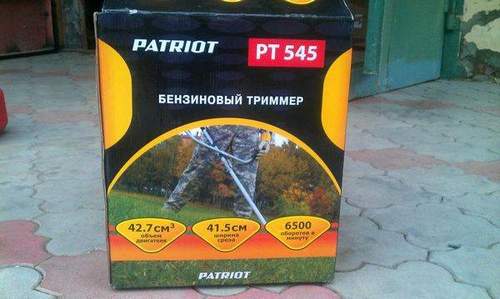 Everything is assembled easily and simply: with four screws we fasten the motor to the rod, fasten the protective cover, insert the handles, hook the belt and. voila! trimmer ready to go:

By the way, before you screw the protective cover, you need to tighten the screws that secure the plate to which this cover clings! Here they are, these screws:

Third screw "lock" as you can see, it’s already gone (I’m in the ecstasy of mowing, I began to swing it with a trimmer like a katana, the protective cover turned around its axis (the locking screw pulled out the meat) and cut a piece of this cover with a knife. To prevent this, tighten the damn screws!

Trimmer grade Patriot PT 545: two hexagons, a spanner wrench with a screwdriver, a nozzle with a fishing line, a circular saw (probably for very thick trees))), clamps for attaching a gas cable, a sealing washer, a jar for mixing gasoline with oil.

By the way, the bank turned out to be very convenient. pour gasoline on the left risk, add oil on the right:

The instructions say that you need to use the original Patriot oil. Yes of course))). Mixing ratio. 32: 1 surprised me a bit, because I always believed that for two-stroke engines, the propotion is 50: 1. Since I naturally did not have Patriot oil, without hesitation, I poured into my brand new Chinese trimmer my mixture for the YAMAHA outboard motor, diluted 50: 1 with Yamaha brand oil. The Chinese seemed to be not against such a turn of events) Started up the first time from the fifth or sixth, but then started up with a half-jerk. For 10 minutes he mowed a clearing, overgrown with dense growth of Canadian maple, burdock and some kind of vile creeping grass. Photo "before" did not, here is a photo "after": (The height of the grass was waist-high)

Here are the bells Patriot cuts without wincing:

And such a maple:

While he mowed, he hit with a knife a pile of paving slabs (he completely forgot about it. It was piled in a corner, then overgrown with grass) and touched a slightly large tree. apricot. The knife passed the test with dignity. only the paint slightly departed:

Of the shortcomings: (although what are the disadvantages for that kind of money). rather strong vibration of the motor. An entangled trimmer lying on the ground twitches like a snake. Well, it’s also inconvenient to pour gasoline. the starter handle overlaps the filler neck. But in general, more than a decent trimmer, build quality at an altitude, performs its task 100% Satisfied with the purchase. Finally, a few more photos: