When you start sharpening band saws, you should know that the quality of your lumber. boards, timber, rails, etc., depends on the correctness of the process. Sharpening of band saws is a responsible process, but not very complicated. Following the recommendations below, you will quickly learn this simple but very useful process in sawmilling.

First of all it is necessary to inspect the tape for visible cracks, broken teeth. To do this, take the tape in your hands with your teeth away from you and moving your hands, slightly wringing the tape, start viewing. If defects are found, the tape must be sent for repair, or simply discarded. 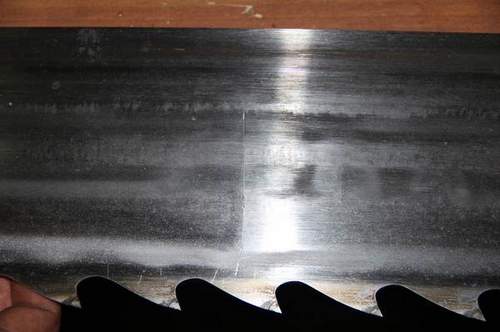 Secondarily the tape must be cleaned of dirt and wood tar adhering to it. After all these procedures, the tape is ready for sharpening.

Carefully take the tape to avoid injuries, as the teeth are sharp enough to damage your hands and insert them into the sharpening machine. The tape must be installed on all the holders on the machine and fixed with a special clamp.

Read more:  How To Sharpen A Circular Saw

In the groove between the teeth we lower the rod of the pusher, with the help of this rod the feed of the tape is regulated. A grindstone is lowered onto the tape from above, it is fixed with a rod that controls the depth of sharpening.

Before starting the grinding machine, set the grinding angle, for the summer forest this angle is 55-60 degrees, and for the winter forest 70-80. The angle is set by turning the bed on which the stone is fixed, according to the divisions, on the machine body.

Please note that the sharpening stone has a bevel at an angle of 45 degrees and during preparation for the sharpening process you must correct the stone if the chamfer does not correspond to the above angle. Editing is done with a diamond tool or a simple large stone.

Just note that editing with a simple stone is more complicated and requires some skills, also does not comply with safety regulations.

You have prepared the machine and saw to start sharpening, now we will begin the process of sharpening a band saw.

First of all, turn on the feed at the lowest speed, for this, toggle switches are provided to turn on the engine and a feedrate speed controller, it reduces or increases the engine speed.

Using a screw on the feed bar, we retract the saw tooth forward or backward and make sure that the stone with its even side (without chamfer) starts touching the straight side of the tooth.

Then we turn on the second toggle switch, which drives the engine with the stone. Little by little, without sudden movements, you begin to lower the stone with the help of a screw rod that fixes it, until the stone completely passes the pocket from one tooth to another.

Under no circumstances should the tape turn blue, so try not to lower the stone very much, just push the feed rod back or forward, otherwise the stone will simply “eat” your tooth. Sharpening of band saws should go smoothly according to the factory tooth profile.

Read more:  How to Sharpen a Band Saw on a Machine Tool Video

By manipulating the feed screws and the lowering rod, it is necessary to achieve the complete absence of burrs on the tip of the teeth. The finished work of the machine can be considered after passing the band saw for at least two circles.

Winter sharpening is practically no different from summer sharpening with the only difference, the angle of inclination of the teeth more straight reaches 90 degrees, depending on the freezing of the wood. The stronger the wood freezes, the greater the angle of sharpening, but keep in mind that in summer with this angle the load on the saw increases and its possible failure.