The Stihl 180 chainsaw does not develop revolutions or after you release the trigger of the gas, it continues to work without slowing down. These problems are quite common. Let’s try to figure out the reasons, the consequence of which is the occurrence of such malfunctions. Also in this article we will consider how to diagnose if the chainsaw does not pull.

Why the chainsaw does not develop speed

There may be several reasons for the lack of traction and a poor set of revolutions of the chainsaw. Therefore, you should not immediately begin to disassemble and repair the carburetor, because the reason may not be hidden in it.

On the Stihl ms 180 chainsaw, a reliable carburetor is installed, on which the manufacturer limited the ability to adjust power and maximum engine speeds, so if the chainsaw falls in traction, the carburetor is the last place to look for problems. 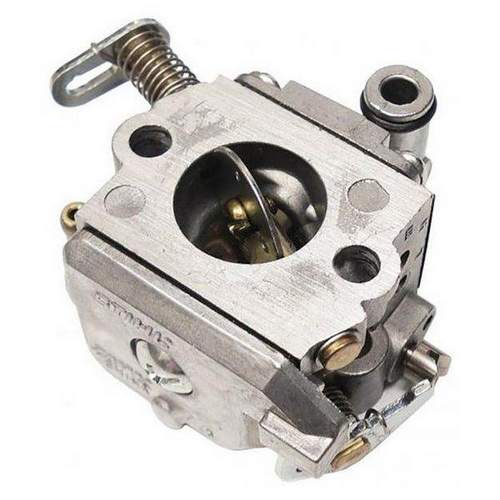 You ask, what is the first? The answer is a silencer. The muffler is responsible for the exhaust and the extinguishing of the flame in them. Through it pass all the combustion products, which over time can clog it. A situation with a soot-filled muffler is far from uncommon, but it arises from an improper fuel mixture.

In the normal ratio of gasoline to oil, the products of combustion are not saturated with soot enough to clog the muffler. In the event that the amount of oil is more than the norm, excessive burning is formed during its combustion. Further, soot accumulates under the piston rings and in the muffler of the Stihl 180 chainsaw. Thus, a coked muffler is the most harmless thing that can happen, the maximum damage from excessive soot is the need to replace the piston.

How to check a muffler

To check the muffler, it must be removed from the chainsaw. To do this, using the 8 mm head, two fastening nuts are unscrewed and the part is removed.

You can clean the part mechanically, using a screwdriver or a spoke, and then blow it thoroughly with compressed air. The seat on the silencer can be cleaned with sandpaper to remove burnt parts of the gasket.

Install the silencer in the reverse order.

Important: when tightening the nuts of the silencer, do not over tighten the nuts, because the threads on the screws can be broken.

The second reason that the Stihl chainsaw engine can reduce power and not reach speed is a blockage in the fuel system. As a rule, the first place you need to start the search for blockage is the fuel filter.

The fuel filter is installed in the tank of the Stihl 180 chainsaw, and it is not very convenient to pull it out. To facilitate the process, you can take a small piece of aluminum wire and bend it at the end, then use it to hook the fuel hose and remove it, together with the filter, from the tank. To check the filter, it is necessary to blow it, if air does not pass, then the reason is found, and the filter needs to be replaced.

Video: Stihl 180 Does Not Reset Turnover Cause

If the filter is clean, check the fuel hose for obstruction. To check, it is necessary to disconnect it from the carburetor and blow it into it with the air filter removed. If clogging is detected, the hose can be cleaned mechanically using a wire, and then blown with compressed air.

The last likely clogging site is the strainer in the carburetor. In the diagram below, it is indicated by the number 13.

In order to clean the strainer, it is necessary to remove the carburetor from the Stihl 180 chainsaw. Work begins with the upper cover of the saw being removed, and then, using the 8 mm head, two fastening nuts are loosened. Further, the filter housing is removed from the guides, after which the air damper rod and the engine control lever are disconnected. Lastly, the fuel hose and throttle rod are disconnected, after which the carburetor can be removed from the guides.

The carburetor mesh filter is installed in the fuel pump chamber, in order to reach it, one screw securing the pump cover is loosened and it, along with the gaskets, is removed.

The strainer can only be cleaned with compressed air. Any mechanical methods are strictly forbidden, because the mesh is very soft and easily changes shape. When you press it, it is easily wrinkled and bends are formed along the edge of the seat through which unfiltered fuel can enter the carburetor.

During the cleaning process, the seat with the filter installed in it must be half covered with a finger and only after that blow air, otherwise the net can fly away and it will not work to find it.

Sometimes, when the screws of the carburetor cover fastening are loosened or the gaskets become unusable, a power loss may also be observed on the chainsaw, in order to exclude the possibility of this malfunction, it is necessary to check the integrity of the gaskets and the tightness of the screws on the carburetor covers. To do this, remove it from the engine (the algorithm is described above) and disassemble. Defective gaskets must be replaced using replacement parts from the Stihl MC 180 carburetor repair kit.

In the case when a complete check of the fuel supply and exhaust system has been carried out, but there are no results. Check the main fuel injector valve. To check, it is necessary to knock it out of the carburetor body. All work should be carried out according to the following algorithm:

All the above steps should help in eliminating the malfunction associated with the fact that the chainsaw is not gaining momentum, otherwise, conducting a full diagnosis in the manufacturer’s service center will help.

Why a chainsaw does not slow down

There may be several reasons why the chainsaw does not slow down:

Solving all these problems is not difficult, you need to conduct a thorough inspection and establish the exact cause, and then change the defective part. As a rule, if the chainsaw is well gaining momentum, idling and has normal power, then the problem is that it does not slow down, it is purely mechanical. And finding and eliminating a mechanical malfunction is much easier than identifying and stopping air leaks in the crankcase of the chainsaw.

Stihl 180 does not develop momentum, a video of the most common reason, you can see below. In it, the owner of the Stihl ms 180 chainsaw, tells his story of solving the problem with power loss.

When the first signs of power loss (decrease in speed) appear with a Stihl MC 180 chainsaw, in no case do you need to continue working, but you must immediately contact specialists or carry out diagnostics and fix the malfunction yourself. There are not many reasons for power loss and you can cope with them even without certain skills. The main thing is to calmly analyze the behavior of the saw and find out the reasons why it stopped pulling (the speed dropped), and eliminating the malfunction is already a simple matter.