The main malfunctions of the Stihl ms 180 chainsaw are associated with the piston group. Consider the main reasons why the piston must be replaced. Let us give a description of the piston and the algorithm for its replacement. 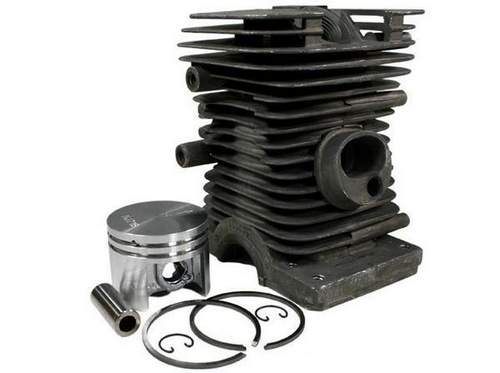 When to replace a piston

There can be a lot of reasons why the piston needs to be replaced, as well as a completely piston one, but all of them can be divided into natural ones and those resulting from improper operation. Natural, this is the wear and tear formed due to the long-term operation of the Stihl 180 chainsaw. Many more artificial ones, for example:

If there is a suspicion of problems with the CPU, it is advisable to contact a service center authorized by the manufacturer, since only in it they can accurately diagnose the malfunction without a full analysis and, if necessary, carry out a quality repair.

9.5. 11 Atm. It is considered a normal indicator at which the Stihl chainsaw starts up regularly and gives out maximum power, if the compression is lower, there is a chance that there are scuffing on the piston-cylinder group or its wear is quite large. In any case, with reduced compression, for further diagnosis, it is necessary to completely disassemble the saw.

To determine the presence of seizure on the piston, as well as the breakdown of the piston ring, you can remove the muffler and conduct a visual inspection of the visible part of the piston, while the rings can be checked for elasticity by pressing on them with a small screwdriver. There will be slight walking on the working rings, the defective or pinched piston ring will not go.

On a Stihl 180 chainsaw, the piston group has a diameter of 38 mm. The dimension of the CPG of the chainsaw is determined by the diameter of the piston, the cylinder is slightly larger. As standard, the MS 180 CPG comes complete with a piston pin, two piston rings, and two retainer rings.

The inner surface of the cylinder should be perfectly sanded and have a glossy shine, which you should pay attention to when buying a spare CPG for the stihl ms chainsaw. If there is damage on the inside of the cylinder, it is not necessary to install such a cylinder.

A distinctive feature of the CPG on the Stihl MS 180 is that it has two compression rings, while almost all of its main competitors have only one. According to the manufacturer, the installation of a pair of rings makes it possible to better stabilize the piston in operation, enhance its cooling and increase compression in the engine, thereby improving start-up.

How to change a piston on a Stihl 180 chainsaw

If you need to replace the old piston and install a new one, you need to know how to do it correctly and follow a certain algorithm of actions. It is also necessary to have a small slotted screwdriver, a special Stihl combination wrench, a power screwdriver, a hammer, a drift of soft material, a compressor and a stopper for the Stihl piston.

Starting work on replacing the piston or piston group assembly, the chainsaw must be cleaned of dirt as much as possible. Further, the work is carried out according to the following algorithm:

After all these operations are carried out, it is necessary to once again clean the saw from dirt, then turn it upside down and unscrew the four screws securing the engine to the chainsaw body. Having unscrewed the screws, the engine is separated from the housing and cleaned again.

On the removed engine, the pan is untwisted and the pallet is removed, after which the piston assembly with the crankshaft is removed from the engine.

When removing the piston from the cylinder, you must remember how it was located relative to the cylinder.

Then, using a small screwdriver, the piston pin retaining rings are removed and the crankshaft is disconnected from the piston.

In the case when it is only necessary to replace the piston, you can install it on the crankshaft, and then mount the lock rings of the piston pin, while arranging them so that the break point of the lock ring is directed downward. This is necessary in order to exclude the possibility of spontaneous popping of the retaining ring during engine operation (according to the manufacturer’s instructions Stihl). After that, compression rings are installed, the cylinder is lubricated with engine oil and the engine is assembled.

The installation of the piston in the cylinder must be carried out with the utmost care, since the compression rings are brittle and break easily.

Why Stihl chainsaw does not start after replacing a piston

Also, the problem may be hidden in the pinched fuel supply hose or if it is not connected at all. Of course, there can be many reasons, but it is worth remembering that if all work on replacing the piston is carried out correctly, the tool should start and work normally without any problems.

We examined the main causes and malfunctions of the Stihl ms 180 chainsaw in which the replacement of the CPG is necessary. But, as a rule, in each case, the reasons may intersect, and for proper repair, an integrated approach to solving the problem is needed. Putting a new piston on the saw does not always mean solving the problem. It is imperative to eliminate the causes of the malfunction and the tool will last for a long time without problems and the need for repairs.