Miter saw with a broach, which one to choose. Service center tips.

How can I make a diagonal washed down of a bar or board?

If speed is important, and not a clear fit to size, and one-time work, not mass, then a circular saw.
If the main thing is the accuracy of the parameters and their repeatability on several workpieces, then no device can be compared with trimming.
The name of the tool itself indicates that the processing of lumber does not occur along the length, but across the fibers. If a master can pick up a board of any length by picking up a circular saw, then the design of the cutter will not allow him to take a size larger than the tens of centimeters laid down by the design.
The advantage of a face saw for wood is the ability to get a clear end of a bar or board at a right or any given angle and a high production speed of the same workpiece.

Any model consists of a wide thick-walled aluminum base on which a rotary table is mounted. From the bed departs the stand carrying the electric motor and the saw block, ending with the control handle. 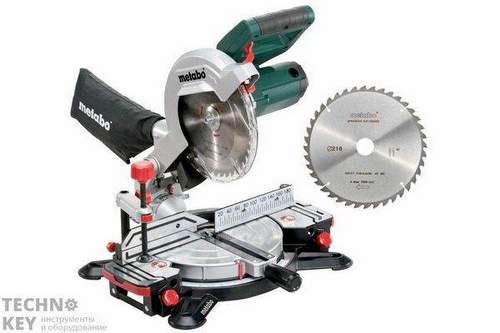 Most devices have a commutator motor. It is much smaller than asynchronous, with similar dimensions and masses, has high torque and is able to develop 5000-6000 rpm. The disadvantages include increased operational noise and the need for maintenance.
An asynchronous motor is preferable, but is rarely installed on miter saws. Its main disadvantage is weight. It is difficult to raise the saw assembly with the motor more than 10 kg.

The connection of the electric motor with equipment can be carried out:

Directly.
The saw blade is mounted directly onto the shaft. The absence of contacting parts ensures high reliability of such a circuit and quiet operation. The disadvantages are: low, compared with other installation methods, torque and minimum cutting height. When fitting and tilting the saw unit not only to the left, but also to the right, it will abut against the workpiece with its end part of the case, preventing it from making a deep cut at an angle.

Through straight gears.
This design allows you to raise the trimming motor higher, and when installing a helical, maximize it from the axis of attachment of the snap.

Belting.
Using pulleys, you can significantly distance the engine from the disk and place it not on the right, but behind the saw assembly. Belts, due to their elasticity, partially dampen vibrations that occur when cutting fibers, which in the case of direct transmission would act on bearings. The elasticity of the joint softens the effect of overload when jamming. The belts simply slip over the pulleys.

Read more:  How To Choose A Trimmer? Instruction.

The base of the miter saw with a broach, the saw table and the angles of its rotation.

The supporting part of the device is a thick-walled cast aluminum base with a qualitatively milled surface. The cheapest models also have a massive, but plastic base with a stamped steel pad.
In front of it, a marking scale is made. The numbers can be cast on the case or applied to a steel ruler.

In the lower part there are ebbs with holes for stationary rigid fastening to the workbench and supporting stops that increase the tool’s resistance to tipping.
When working a miter saw with a pull function, the saw unit not only rises, falls, tilts, but also moves along the guides; the center of gravity is constantly changing.
The supports are arranged in front, to support the clamping handle of the turntable and behind. They can be made integral with the base and in the form of folding brackets.

A rectangular or trapezoidal element with one beveled part serving as a stop for the workpiece. It is implemented in the form of two components; often with scales orienting along the length when cutting short workpieces or as an integral part of the base (budget versions).
On some devices, they move along the grooves to the side to make room for the snap-in when fitting.

Video: Trimming With Broach Which to Choose

Serve for the best positioning of long boards. At inexpensive angle cutters, they have a U-shape bent upwards made of a steel bar or tubes with a diameter of 8 to 12 mm.
For professional wood saws, the end ends with an aluminum stand or a steel profile, with a fine adjustment mechanism to form one plane with the working table.
They are inserted into the holes on the sides of the support part and are fixed by a spring-loaded mechanism or threaded clips. Easy to remove during transport.

Rigid fixing of the board allows you to avoid vibration transmitted from the bed, increase positioning accuracy and protect the worker.
It is carried out by clamps of various shapes and designs (threaded, step, on hinges), acting vertically (to the base) or horizontally (to the stop).

By pulling the spring-loaded handle of the angle lock, you can move the saw head to the left or right horizontally, which is rigidly connected to the turntable. This means that when lowering, the snap will always fall and sink into the slots. The depth of immersion in the groove can be adjusted with a stopper.
An oblong protrusion with such a slot, extending from the round section, for trimming with a broach is much longer than 280-340 mm compared to 80-180 mm for a tool without such a possibility.

Read more:  How to store nickel cadmium batteries for screwdrivers

Most angle cutters are rotated for cutting by 45 ° in both directions. But there are models in which the maximum shift to the left / right: 47 ° / 47 °; 45 ° / 47 °; 47 ° / 60 °. Such small deviations from the “half perpendicular” serve to fit in place of the timber and boards.
The fitting of the moving parts of a good saw should guarantee a clear multiple repeatability of a given angle, i.e. when scrolling the turntable and returning to the previous position, the saw angle will not be different.

It is rotated by unlocking the handle, or, in the absence of it, by loosening the locking screw and aligning the pointer with the scale. It is convenient when there are many fixed values: 5; 10; fifteen; 22.5; thirty; 35; 40; 45 degrees.

Dimensional assembly consisting of a saw blade, an electric motor, protective covers, a tilt mechanism, a control handle with a control button.
To perform shrinking, that is, joining wooden parts across the entire width, they must be cut off at 45 °.
All miter saws with a broach can tilt the blade from a vertical position by 45 ° to the left. Some in both directions. This is more difficult to implement, due to the location of the engine, which during lateral installation will rest against the workpiece leaning to the right.
On professional angle cutters, some tilt angles are fixed: 0, 15 °, 22.5 °, 30 °, 33.9 ° and 45 °, and the maximum is 47 ° or 60 °.

Carbide disc and its protection device.

The outer diameter of the most popular equipment: 210, 255 and 305 mm. The soldered circle rotates at a speed of several thousand revolutions, so from the user’s side it is always closed.
The protective casing consists of two parts. As standard, the upper fixed part is narrow aluminum. Bottom movable wide, made of transparent plastic. Lowering and raising the casing occurs automatically, following the movement of the saw block.
On miter saws with a broach, a roller is usually placed on the left edge of the lower part of the protective element, which moves parallel to the workpiece groove on the worktable.

Changing equipment is carried out with a key while holding down the spindle lock button, or using a quick-release nut.

Usually one, located in the horizontal plane, but there may be two (the second is vertical near or behind, on the pulling mechanism). The power key is installed on the handle and it also serves to grip during transportation.

At all end saws on wood, there are nozzles for collecting sawing waste.
Sawdust can be collected autonomously in a bag. This is facilitated by the closed form of protection of the disk: during its rotation, the air flow captures most of the sawdust and, having passed around the circumference of the casing, throws them into the branch pipe located at the rear.
At other trimming, the dust extraction system is organized through a groove in the turntable. The channel is connected to a bag mounted at the bottom of the rotary assembly.
Practically all wood waste can be collected only by installing a chip evacuator and using two branch pipes.

Miter saws with a broach.

The disadvantage of the design of the tool is the small length of the cut. The disk is vertically lowered onto the workpiece by about a third part and the cut length is much smaller than the diameter.
You can increase this parameter by setting the pulling mechanism on the angle cutter, when the saw unit is supported by two horizontal guide rods, and they move inside the rack, which is performed not vertically, but slightly folded back.
This device allows you to increase the cut from 80-200 to 240-340 mm (maximum 430 mm). Having installed a wide material, the worker simply pulls the saw head.
For quality work, the manufacturer must ensure sufficient structural rigidity and the absence of backlash, which is not easy to do due to the large number of movable joints.

Combination tool with a cutting table.

Both on face saws with a broach, and on standard models, a cast aluminum platform can be installed in the upper part. The disk emerging from its slot allows you to create a mini circular tool on the basis of the cutter to dissolve the boards along the length.
The saw block locks down. The power button is locked after pressing. The push of short workpieces is carried out with a plastic pusher.

Choosing the best miter saw for yourself, pay attention to: