Angle grinders (short. angle grinder) are necessary not only for professionals in the field of construction and repair, often home masters may have a question how to choose an angle grinder for the house. Let’s determine what the optimal tool should be. 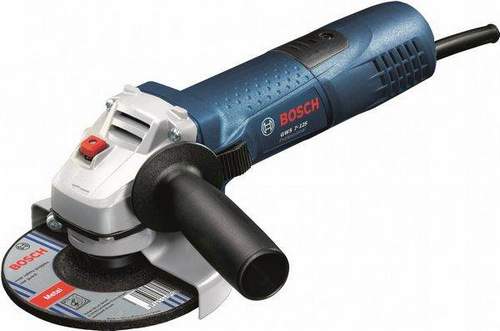 Basic requirements for an angle grinder. do expectations coincide with reality?

To begin with, it will be useful to determine the terms and principle of the tool. So why exactly the “angle grinder"? The fact is that the first angle grinders were imported to Russia from Bulgaria, and that is why the people got a consonant name. An angle grinder consists of a body with an electric motor, a rotor, a threaded shaft for nozzles, a protective casing and a handle. this is a short list of the main components, which, of course, are much larger. Distinguish between wire and cordless angle grinder, professional with high power, medium and small for small needs. Actually, just the power of the angle grinder, its dimensions and the diameter of the casing determine the selection criteria. Although there are other factors that we will discuss separately below.

The main quality that every master expects from a tool is reliability. This concept includes both wear resistance, and low maintenance angle grinder, and resistance to high loads. As a rule, it was believed that grinding machines of well-known foreign brands mainly possess such properties, the high rating is confirmed by the fact that they are often faked in China. However, recently, the domestic industry began to increase momentum, and the production of power tools reached a new qualitative level. Now began to fake and Russian brands.

We choose a domestic manufacturer. the most popular brands

angle grinder for domestic use

The second largest company producing angle grinders is Interskol. The production base of this manufacturer includes the Bykovsky Power Tool Plant (abbreviated as BEZ) and the Interskol-Alabuga complex in the Republic of Tatarstan. True, some models are made from foreign parts, so they can not always be called domestic. Part of the products of this company is produced in the shops of the Izhevsk Mechanical Plant, where all components and electronic components are manufactured. There are also production complexes in Spain and in China.

Another domestic enterprise producing high-quality angle grinders is Konakovsky Mechanized Tool Plant, but it specializes mainly in pneumatic devices. It is also worth mentioning the company Violet tape, recently, confidently advancing to one of the leading positions in the Russian market. The fact is that the tool produced by this manufacturer is quite reliable at a low cost. True, this brand has not yet become popular.

Read more:  Can I Use A Polishing Machine As An Angle Grinder

Large or small angle grinder. which size to choose?

Even for beginners who pick up a power tool for the first time, it is usually clear that the more powerful the device, the heavier and larger it is. Regarding the angle grinder, there is another factor. the diameter of the nozzles that can be used depends on the power of the machine. Corresponding dimensions are attached to the protective casing, and a disc with a diameter larger than the permissible one simply cannot be delivered. So which angle grinder to choose? It all depends on the nature of the work that you have to face.

If you plan to saw brick and concrete and grind, as well as cut thin sheet metal, a tool from 600 to 900 watts is enough for you. But with thick welding seams, a low-power angle grinder, as we already mentioned, will not cope, as well as with thick steel, so for channels and I-beams it is better to choose an angle grinder from 1 kilowatt and above. Also, power matters when choosing nozzles. If you need to cut through a concrete slab of large thickness, you will need a disk of about 23 centimeters in diameter, with a small nozzle within 12.5 centimeters you can not cope with the task.

As for the most popular drives for domestic use, these are just diameters from 115 millimeters to 125. Accordingly, to work with them, you need a small angle grinder. This option is very convenient, because you can work with a small angle grinder with one hand, just holding it by the body (this will not work with a professional tool). That is why the rating of grinders with discs of 125 millimeters is very high. Also, in order to cope with the grinder, without resorting to the second handle, it is advisable to buy a device with speed control.

If the angle grinder is equipped with speed control, it is undesirable to exceed the permissible load or work longer than the recommended active period (15-20 minutes), otherwise the electronic gear shifting unit may fail.

For small angle grinders, there are very convenient nozzles with a diameter of 125 millimeters with a so-called “Velcro”, on which you can attach and, pressing, instantly fasten the emery wheels equipped with a corresponding coating on the back. Such grinding tips are suitable for both wood and metal. As for other discs, metal with a dusting, abrasive or lobed from overlapping pieces of sandpaper, their size and thickness depend primarily on the size of the protective casing, without which it is strongly not recommended to work.

What to look for when buying an angle grinder?

First of all, the tool must be wired. A cordless angle grinder is convenient, but its working time is very short due to the strong resistance of materials during cutting and significant friction during grinding. Therefore, if you need mobility, you need to have a wireless device as a backup, and the main one should be a network one. Now about how to choose the right angle grinder. Make sure that it has a soft start, that is, a gradual, but not sharp, increase in speed, otherwise there is a risk that one day when turned on, a disk with an imperceptible defect will fly apart. Also pay attention to the speed limit. If you purchase a tool without changing speeds, and take the nozzle only within the specified limits, otherwise the result will be the same. the destruction of the disk during operation.

The option to automatically turn off the brushes

A rather important factor when choosing is the presence of automatic switching off of the brushes at those moments when the power supply is briefly interrupted. This will save the tool from breakdown due to a sharp decrease in speed and at the next moment the same sharp increase. Another very convenient function is the fixing of the start button, it is not on all instruments, which is due to the safety of the operator, but for long-term operation this option is very important so as not to tire the hand. By the way, start-up fixation is usually present on angle grinders, starting from the average power level; on very small ones, it is not necessary.

Some models have a rather interesting ability to remove and put on the casing without using wrenches, which can also be an important criterion when choosing a tool. The fact is that it is the complexity of installing a protective shield that prompts some operators to neglect it with frequent replacement of disks, which leads to injuries. Be sure to focus on the presence of dust protection in the grinder, at least for brushes, so that the tool does not jam during operation. But it is better if the entire stator is protected by the casing, that is, the main part is an angle grinder, to which the rotor joins. However, if the question is how to choose an angle grinder for the house, and not for the workshop, you will not have to deal with a lot of dust.

Read more:  Do I Need To Adjust The Speed On The Angle Grinder

angle grinder for domestic use. summarize

So, if you are not a professional, and you need to make a choice, an angle grinder for work in the house or in the garage, and not for repair or construction, but for various small tasks, for example, to remove old varnish from furniture. choose a small tool. Ideally, you need an extremely lightweight grinder that can be held without tension with one hand without resorting to an additional handle.

Adjustment of the nozzle rotation speed is necessary if only because the 2nd or 3rd speed is sufficient for grinding with emery wheels, the 6th tool is already poorly controlled without additional fixation. And many houseworks force the second hand to hold the work surface or to keep the operator on the stairs. If you have a suburban area, mobility will not be superfluous, and the best angle grinder for this option is cordless. But you should choose those with a spare battery included, so that while you work, you have a backup battery, after installing which you could charge the main battery. However, if you have a multi-meter extension cord, it will be much more productive to use the network model.

And finally, if it is not intended to cut large parts, a sufficiently low-power angle grinder with a maximum nozzle diameter of 125 millimeters. Actually, she can also cut metal, the depth of cut at the same time will be about 4 centimeters, which is not bad when performing small household tasks. The main thing is to measure the power and size of the drives. The larger the nozzle at low power, the higher the load on the tool.