Despite the high performance of chainsaws, sometimes there are times when the tool stops working normally. In particular, a common situation is the fact that the chainsaw begins to stall when you press the gas. For experienced owners of tools, this problem is known, but for beginners who have encountered this for the first time, they will have to turn to specialists for help. But do not rush, in the material you can find all the important causes of the malfunction, as well as try to eliminate them. 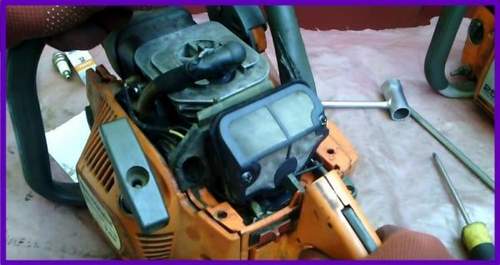 If the chainsaw stalls after pressing the accelerator, it means that there is a breakdown of some element. It is very difficult to determine the cause of such a malfunction right away, as various factors can contribute to this. The search for the cause should begin with verification activities of the main systems of the instrument, starting from the smallest to the largest.

The first step is to check for fuel in the tank. Often masters are so keen on sawing that they forget to add fuel to the tank. Even if there is a certain amount of fuel in the tank, and the chainsaw starts up and immediately stalls, then this may be due to the lack of mixture as a result of clogging of the fuel channels.

If everything is in order with the fuel, then the cause must be sought in the spark plug. It should be unscrewed and inspected contacts. If there are no signs of dampness and soot, then you need to check the size of the gap, which should be 0.5 mm, and after the presence of a spark. If the candle has not been replaced for a long time, then you need to change it, and then restart the tool.

It is also necessary to check the muffler, since its clogging can impede the exhaust gas, which affects the functioning of the internal combustion engine. The silencer is subject to dismantling and wet cleaning of soot. If the above steps do not help to fix the problem, then you will need to delve into the situation in more detail, since the cause may be a malfunction of the carburetor or the need to configure it.

Causes and features for troubleshooting

Why the chainsaw stalls after start-up or during operation can be found out only after checking. As a result of the check, you can not only detect the causes of malfunctioning of the motor, but also possible breakdowns. In order to find the exact cause, you need to know in what cases a malfunction is observed. Consider such cases, and also find out the features of troubleshooting.

Stalls when you press the gas

If the engine stalls when gas is added, the following factors may be the reason for this:

In case of overheating with a lack of oil in the fuel mixture, it will be necessary to carry out a major overhaul of the engine, which is one of the most unpleasant consequences. In order to properly adjust or clean the carburetor, you should give it to a specialist, since the lack of experience with small parts can lead to damage to the mechanism. Checking the air and fuel filter can be done by yourself.

It’s important to know! The fuel filter must be replaced every 3 months with daily use of the tool.

If the chainsaw does not allow you to develop speed when you press the gas, then it is advisable to try to replace the fuel mixture in the tank, especially if it has been in the tool for a long time.

If the chainsaw begins to stall under load, the reason for this is, first of all, the incorrect carburetor setting. If this reason is eliminated, then in addition to problems with the carburetor, the cause of tool inoperability under load can be damage and wear of the crankshaft oil seals or carburetor gaskets through which air is sucked into the system.

It’s important to know! Diagnosis of such a malfunction is best done at a service center, where the exact cause will be established.

It is recommended to start troubleshooting by checking the gaskets and gaskets, and only after that check the carburetor settings. Another reason why the chainsaw starts and immediately stalls under load can be grinding of special hoses, through which the impulse is transmitted from the crankcase to the fuel pump. But such hoses are not installed on all models of chainsaws, but only mainly on professional ones. To eliminate the malfunction, it is recommended to replace this hose. How to do it right is discussed in the video:

If the chainsaw starts up poorly and stalls at idle, the first cause is a clogged muffler. The muffler should be removed and then wet cleaned. This is very important, since with dry cleaning dust can enter the lungs, which will lead to serious respiratory failure.

The reason that the chainsaw starts to stall when tilted is the lack of fuel in the system. The fuel pipe is located directly at the bottom of the gas tank, so tilting the tool causes the pipe to simply begin to be located above the fuel mixture. Actually, therefore, when the tool is working, it can stall sharply.

Read more:  How To Set Up A Chainsaw Carburetor? Recommendations.

When the chainsaw begins to stall at high speeds, the following details are subject to inspection:

The air filter must be cleaned, for which it is enough to wash and dry it (paper-only change). You can check the clogging of the fuel filter by disconnecting the fuel hose from the carburetor. If the trickle of gasoline from the hose flows well, then the fuel filter can not be checked or replaced. If the trickle is weak or there are no signs of fuel supply then replace the filter and clean the breather with a regular needle.

Checking the gas pump is checked for the characteristic signs of fuel leaking through it. If there are no signs of leakage, then everything is in order, so it remains to check the carburetor. Depending on the power of the saw, maximum revolutions are set, which can be checked using an electronic tachometer.

As can be seen from the description, there are a lot of reasons why the chainsaw starts and stalls. Most often, this occurs due to improper carburetor adjustment, although on branded chainsaws, such as Stihl, Husquarna, carburetor adjustment is a rare event if you pour a high-quality fuel mixture. If malfunctions and malfunctions occur in the operation of the tool, it is recommended to carry out its diagnostics and repair, and only after the elimination of the malfunction continue to use. Not infrequently, minor symptoms of malfunctions become serious problems for tool owners.