Table for a hand circular saw

That I needed a table for a hand-held circular saw, I realized right away as soon as I bought this saw. Of course, sometimes a circular saw is best used in "normal mode". In most cases, it will be more convenient to work if you fix it stationary.
In addition, it was not very difficult to make a table for a manual circular saw.

He decided to make the saw table in the form of a prefix to a joiner’s workbench. This workbench is large enough and not at all lightweight, which is important in terms of overall rigidity and stability.
Of course, the design turned out to be rather primitive, but very simple and quite functional.

Attaching a hand saw to a table 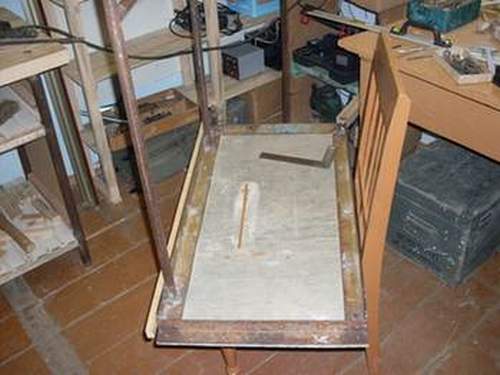 Hand saw "Diold" (power 2 kW, disc 200 mm, max. cut depth 65 mm) was simply bolted with four M6 bolts to a table welded from the corner from the old bed and an aluminum sheet (for lack of steel) measuring 400×800 mm. With one wide side, the set-top table was attached to the workbench, so it has only two legs.

At first, everything suited me. It was somewhat embarrassing that she drank a little under the table under the influence of her weight (6 kilograms). That is, I could, holding the engine with my hand, swing the saw up and down by 3-5 mm. Accordingly, the saw blade also deviated from the vertical position, so sometimes the cut quality was not very good.

It could not be otherwise, because the motor with the gearbox was attached to the base at two points, and even on duralumin hinges. In the inverted state, these hinges accounted for the weight of the entire saw, this created additional vibration and the hinge connection had to be periodically tightened and the angle constantly monitored.
At least one other attachment point was needed, and in the end I decided to redo something.

The first step was to separate the engine with the gearbox from the base (1). Having unfastened a lock ring, I removed a steel protective casing (2). These details are no longer needed. A new base (3) was cut from a four-millimeter steel sheet, about the same size as the native one. Angle grinder sawed a rectangular hole for the disk.
Of the regular parts, you will need an arched bracket with a clip to adjust the depth of cut.

Since I intended to cut the material only at an angle of 90 degrees, I left all the details related to adjusting the angle of inclination of the saw blade on my native base. The saw is attached to the new base directly. This gives a gain in the depth of cut of about 10 mm. This was another reason why I started this alteration.

As in the factory version, the base is fixed to the gearbox at two points. One side. with the help of a native arcuate bracket and clamp, with the help of which the flight of the disk is fixed relative to the table. The bracket itself is attached to the base with two M6 bolts.

On the other hand. with the help of a standard pin and two steel corners 25x25mm. First, I fixed both corners to the M6 ​​bolts, then, after adjusting in place, I welded one corner. So more reliable. The second corner on two bolts with nuts. In the future, putting washers between the corner and the base, you can adjust the angle of inclination of the saw blade.
Yes, and at the other end of the pin I cut an M6 thread. Just in case.
As expected, the fastening made in this way turned out to be more rigid.
The maximum reach of the saw blade above the platform was 70 mm.

It remained to find the third point of attachment of the saw.
There were several options for how to do this. The plastic handle was in the way. I wanted to shoot it, but then the idea came to use it as a third point. the pen itself. It is quite rigid, has five points of attachment to the gearbox. Yes, and no need to mess with wires.
One of the holes in both halves of the handle is drilled to a diameter of 6 mm and a bolt is inserted there. So that the halves of the handle do not bend when tightened, between them a plastic sleeve of the required length is put on the bolt.
An additional bracket is cut out of steel 3 mm thick, in which an arc-shaped cut is made using an angle grinder with a 6 mm grinding disk. I found a finished plate of suitable sizes, so it has such an intricate shape. The bracket with the help of a corner is fixed to the sole with bolts and nuts, and after final adjustment is welded. This is the third attachment point.
Both clamps were close and almost in the same plane, which is very convenient.

Finally. Some photos. Everything is clear there. Some photos are clickable for enlargement. M14 nuts are welded to the two legs of the table from below, bolts are screwed into them to adjust the table in height. For the same purpose, in the places where the saw table was attached to the workbench, not holes were made, but cuts, which allows it to be installed strictly in the same plane as the worktop. And if necessary, you can loosen the mounting points and with a flick of the wrist to separate the table from the workbench. For example, for any alteration.
To increase rigidity, two transverse steel plates were welded to the frame with a width of 50 and a thickness of 4 mm.

The photo shows what the depth of cut turned out. Well, the general view from different angles.

P.S.
Sometimes they ask why the factory protective cover was removed, and about safety.
I answer. IMHO, the protective cover (the one on the spring) in the stationary version is not needed. There is enough external dural fence. Removing the inner casing provides several advantages. It has become easier to change the disk, since now it is almost completely open. When sawing raw lumber, the casing was quite clogged with sawdust, after turning off the engine, the disk stopped after 1.5-2 seconds, i.e. there was an extra load on the engine. This is the answer to the question asked in the comments.
As for security. Working with any power tool is dangerous in itself.
If you have vague doubts, install the propping knife that comes with the saw and a small protective cover that covers the blade from above.

Replaced the table top of the saw table. Instead of aluminum, I installed a steel sheet 4 mm thick, two corners 45×45 mm are welded across from below for rigidity. He made another carriage with two guides.

Device for adjusting the depth of cut. Primitive but comfortable. On a wooden vertical bar you can put a scale, but somehow I can do without it.

An example of the use of the machine.
Edged board from unedged.
Marking and trimming one board takes minutes.